“The Agony and the Ecstasy of Steve Jobs”

Robby McGhee expertly channels monologist Mike Daisey in this one-man show about the history of Apple Inc. and the conditions of the Chinese factory workers they employ. 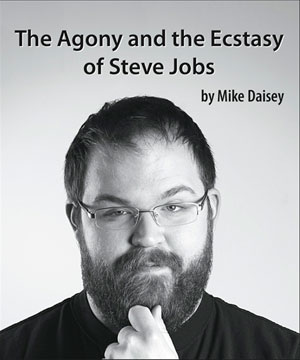 The Agony and the Ectasy of Steve Jobs.

Every word of this review exists only because of the hundreds of Chinese factory workers who assembled my MacBook piece by piece over the course of their 12- or 14- or 16-hour shifts, in a city I could not find on a map, for a wage low enough I could lose the same amount from my wallet and mourn it less than a day.

That’s a truth that was easier to ignore before seeing The Agony and the Ecstasy of Steve Jobs, being presented by The World’s Stage Theatre Company this weekend only. The 100-minute monologue, directed by Alan Piotrowicz and performed by Robby McGhee, is an exceedingly well-crafted work, originally by Mike Daisey, that alternates between telling the origin story of the world’s most profitable company and describing his trip to China’s Shenzhen, the site of the factories where that company’s workers assemble Apple products under horrific conditions.

As you’d expect from that description, it’s a controversial monologue, not even taking into account the backlash that erupted after parts of it were revealed to be fabrications invented by Daisey to make the factories sound even more cruel than they already were. He’s since apologized and reworked the monologue, removing the contested sections and obliquely referencing the changes elsewhere.

It is this Agony and Ecstasy 2.0 that McGhee and Piotrowicz have brought to Milwaukee. While the open-source license Daisey has released the monologue under allows for adaptation, a cursory glance through that script suggests that the duo have left their source material largely intact, which puts McGhee in the position of, in a sense, playing Daisey giving his monologue.

It’s a role he thrives in. Daisey’s monologue crackles with a wry wit, even in its more serious moments, and McGhee consistently nails it. In fact, if anything, McGhee takes it further  – his long-standing comedy background (with T.I.M., The Improvised Musical, and other shows in town) gives him the tools to push harder on some of the better bits, and more often than not the laughter resulting is successful enough for him. You can tell by the little smirk around his eyes.

The monologue itself is a complicated beast. It’s initially hard to reconcile the historical half – a veritable love letter to Apple and Steve Jobs – with Daisey’s tale of his trip to Shenzhen, where the company Foxconn employs thousands of Chinese to work in conditions I’m powerless to adequately summarize. Much has been made of Daisey’s fabrications, but if even half of what is still in the monologue is an exaggeration or hyperbole, those laborers are still suffering a nearly unimaginable fate that any supporter of human rights should be outraged about.

The moment you realize that is the moment the two halves come together. Daisey/McGhee is writing that love letter to Apple, but it’s an Apple that’s long gone, replaced by a corporation that makes promises of a bright future if we just stop looking at the present or the past. It’s a comforting belief. But it’s one that shatters when you begin to think about it.

McGhee and Piotrowicz have brought us a play that makes us think. That deserves applause as much as the performance itself.

The Agony and the Ecstasy of Steve Jobs will be performed twice more: tonight (Saturday) at 7:30 p.m. and Sunday at 2 p.m. Tickets are $20, $15 for students/seniors, and can be purchased online at Brown Paper Tickets or at the door.