Art*Bar Is a Painter’s Paradise

Owner Donald Krause has created a unique blend of tavern and art gallery. 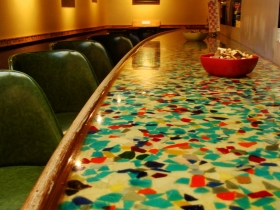 The 9/11 tragedy seized the minds of millions of Americans, with some questioning their own security and future livelihood. The reaction of Donald Krause, owner of Art*Bar (722 E. Burleigh St.), was a little different. “That was the real motivator behind the bar,” he says.

Krause, then 42, took the event as a personal wake-up call and sought out a place to cultivate his Riverwest dream, to create a unique tavern. “I never told anyone what I was working on and I didn’t know when it was going to open,” says Krause. “I had never done anything like it before.” All he knew was how to create a good atmosphere, developed from his eight years as an interior designer at Ethan Allen.

He began making offers on places in the fall of 2001. His first offer was on Albaneses on Keefe Ave., which they refused. It was not until his friends’ house party on Fratney that he took notice of a boarded-up little building on Burleigh.

“My friends told me the building was possessed,” says Krause, “basically, it would spit a business out every year.” But that didn’t dissuade him and he sought out the building’s owner, Randee Zitelman.

At the time, she was leasing the space to an establishment called Sweet Black Coffee, which according to Krause, the neighborhood felt was a questionable little business that didn’t always have coffee and would cover up its windows to host private parties of some kind.

It was not until after a suspicious fire broke out and the building was boarded up, that he attempted to make an offer. Zitelman however, initially declined due to the amount of work needing to fix the building. Krause continued to call her every month for six months just to let her know he was still interested. Finally, on New Year’s Day 2002, she called him.

There were definitely some serious issues with the building like a roof leak that went through all three levels and a brick wall on the east side of the building that was peeling off, Krause says. But he was undaunted and along with his financial partner, Greg Ponto, bought the building in March 2002.

The idea was for the two apartments on the second floor to pay his mortgage, while Krause used the first floor to do whatever he wanted. So he pulled up his sleeves and on the weekends would “whittle away at it.” 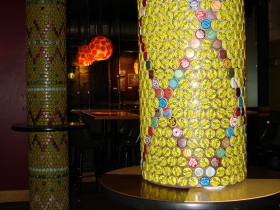 “I had creativity and time,” adds Krause. He took down walls, laid a new floor, built a bar and painted. Then came his creative accents to the place like the table tops made of rulers, the paint-by-number paintings wall, the soda bottle cap pillars, the bar top made of recycled sea glass, the bungee cord railings and so forth. Krause used very vintage and highly collectable materials to build what he calls an eclectic bohemian environment that is both casual and colorful.

The goal was to create a space that felt like a home or clubhouse where creative people could come to hang out, says Krause. In all, he spent $60,000 to fix the building and renovate the first floor, and in January 2004, Krause retired from his full-time designer job and prepared for his grand opening in March.

The Art*Bar now features a dozen or so art shows and activities each year that bring in local, national and international talent, as well as a variety of Riverwest patrons. “I like finding the artist that is just raw,” says Krause, “that makes art for art’s sake and never sold anything.”

This idea of the non-commercial artist is highly ingrained in the motif of the bar and is what “truly inspires” him, says Krause. Anyone can see a famous painting in a museum or buy a reproduction. It’s a unique experience, however, when one can go to their corner bar and see works done by unknown artists. 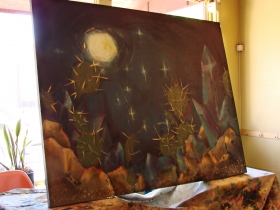 The “Open Canvas” or “Painting Of The Week,” which is done each Sunday, is a unique Krause touch. The artist is given until closing time to create whatever masterpiece he/she desires, along with a complimentary $50 bar tab. However, there is a catch. The following week it will be painted over by another artist. The artist must learn to let go.

“It’s a painting that is traveling through time,” explains Krause, “nobody can own it.”

Frank Korb, visual artist and art teacher at Waterford Union High School, says he hasn’t seen another place like the Art*Bar. Korb makes it his goal to come paint each year and has even mimicked the idea with his own students in the past.

“It’s being a part of something bigger,” says Korb, who will be painting for it this July 7. He plans to do a more abstract piece. In the past he has done portraits of his father, sister, daughter and Barack Obama.

Each March for the tavern’s anniversary, Krause invites back all of the open canvas artists for the “One Week Painting Show” to view a slideshow of each week’s painting from the previous year. Krause picks his favorite 10 slides to blow up and hang around the bar. By now he has a collection of 520 slides from past paintings. 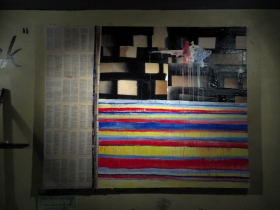 “To have real artwork in a space where everyday people come and go, it has helped revitalize this part of the city,” says Korb. “To have something that is cultural and important and such a variety, it’s an incredibly great idea.” This is why many artists and patrons continue coming back.

The Martini Girls Gallery & Studio, LLC run by Marcia Hero, Marcia Hochstetter and Debbie Callahan, have had multiple showings at the bar and are expected to host another this June 14 to July 19, called “In Your Face.” The exhibit will display roughly 35 different artists’ self-portraits.

All three ladies became involved with Krause’s bar roughly four years ago and have continued to show in his establishment. “He’s very supportive of the local talent, artists and musicians,” says Callahan.

But sometimes even the supporter needs support. Back in the summer of 2005 and only a year after opening the bar, Krause got shot in front of his bar by a 14-year-old boy trying to rob a customer. The neighborhood was in an uproar and he faced months of physical therapy and emotional trauma. “The whole thing at the time just felt very surreal,” says Krause, and “the business went into the tank.”

“It was a real fight for survival,” he continues. That was when he decided to make a change by opening during the day and adding coffee into the mix. “That was our saving grace,” says Krause, “people began coming back.”

In 2008, the coffee business became less lucrative when Alterra entered the scene, opening its cafe on Humboldt, but the Art*Bar is still going strong.  Krause has only planned on owning a bar for 10 years, and next March he will achieve that goal. So where will he go from here?

He may just have a few things “on the drawing board,” Krause says, and is considering opening another location in Madison or Minneapolis. It’s sort of a secret, though, he adds.

“The formula is driven by the passion within me,” says Krause. Whether he expands to another city or not, he’s created a unique institution in Milwaukee. 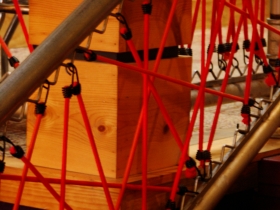 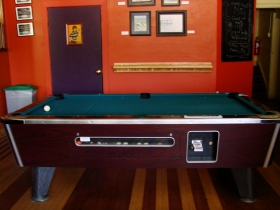 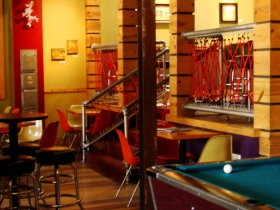 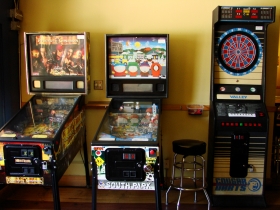 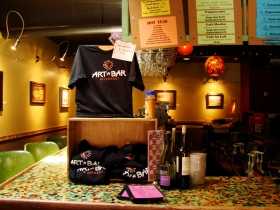 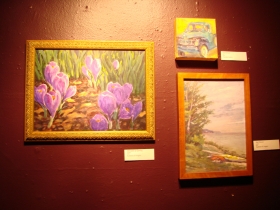 One thought on “Taverns: Art*Bar Is a Painter’s Paradise”