Does MACC Fund Give Enough to Charity?

The high-profile group spends a lot on administration, including a salary for Jon McGlocklin. 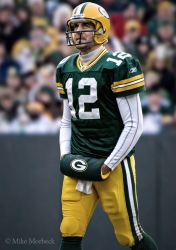 On Sunday the Milwaukee Journal Sentinel offered a front page, top-of-the-fold story touting the work done by Packers quarterback Aaron Rodgers to raise money for the MACC Fund — the Midwest Athletes Against Cancer.

The praise certainly seems merited. As the story notes, since 2010, “Rodgers has helped generate $725,000 in net proceeds for the MACC Fund,” and a fundraising dinner starring Rodgers at the Hyatt Regency this evening is expected to hike that the total “to well over $1 million.”

But the story goes on to all but canonize the MACC fund and everybody associated with it. It tells us that former Milwaukee Bucks star Jon McGlocklin “has been president since Day 1 and though he will turn 70 on June 10, he still gives selflessly and energetically to the organization and attends many of the annual fundraising events.”

One would hope McGlocklin attends some of these events. As the group’s federal tax forms show, he has drawn a full-time salary of $87,000 for the last seven years. JS reporter Gary D’Amato’s use of the word “selflessly” makes it sound as though McGlocklin is working for nothing.

Then there is John Cary, the group’s executive director, “who is McGlocklin’s equal in terms of compassion and bulldogged determination,” D’Amato tells us. How D’Amato came to that conclusion is not explained. But his story leads one to believe there are probably tougher fundraising jobs out there. As McGlocklin notes, “We’ve always had the sports connections that have given us an edge.” Indeed, D’Amato writes, “over the years, a who’s who of Wisconsin athletes, business leaders and celebrities have supported the charity.”

The compensation of Cary and McGlocklin becomes more relevant when you consider the rankings by Charity Navigator, which rates 6,000 charities to help donors decide which groups are the best run. It gives the MACC Fund just two stars on its four star ranking. The group gets a good score for accountability and transparency, but a very poor score  (32.30 on its 70 point scale) in the financial category, which looks at the percentage of money raised that goes the charitable program in question (in this case the cure and prevention of childhood cancer) rather than to administrative and fundraising expenses.

Charity Navigator concludes that 68.9 percent of dollars raised by MACC actually go to programs combating cancer, and notes that 7 of ten charities “spend at least 75 percent of their budget on programs and services they exist to provide.”

Cary contends that Charity Navigator’s ranking counts some of his group’s contributions to the Medical College of Wisconsin (the main group MACC gives to), Children’s Hospital and the University of Wisconsin Carbone Cancer Center as administrative expenses. “That puts everything out of skew. We’ve tried to work with them (Charity Navigator) in the past on this.”

But Cary’s explanation is contradicted by the MACC Fund’s own 2011 tax form, which verified that it only spends 68.9 percent of its budget on grants to cancer fighting programs. Nor was that an unusual year. The comparable figure was 67.6 percent in 2010 and 68 percent in 2009. That seems pretty high when you consider the group simply does fundraising and has no other function for which it needs staff, and yet takes a higher percentage for administration than 70 percent of charities in the nation.

McGlocklin has been president since 1976 and did indeed work selflessly for decades for the fund. But in 2006 he decided he wanted to draw a salary, and the MACC board approved this. Given that he is board president and probably hand-picked many of the board members, it probably wasn’t difficult getting this approved.

“He works very hard,” Cary says of his boss McGlocklin. “He solicits support. He talks to people.”

McGlocklin and his board  in turn have been generous to Cary, jacking up his compensation. “I’m not to apologize for what I make,” says Cary. “The board clearly feels this is a good investment.”

Are there groups spending more on administrative expenses than the MACC Fund? Undoubtedly. And some of those may be groups raising money to fight cancer. MACC’s performance isn’t terrible.

But it isn’t great, either. By way of comparison, Charity Navigator lists four groups that raise money for cancer, two in NY, one in VA and one in Maryland, that get an overall ranking of anywhere from 57 points to 67 points, compared to MACC’s mediocre score of 43.

This is a fund, moreover, that is very high profile in this community, gets contributions from many athletes and is constantly promoted on Bucks telecasts. The promotion is free but the main guy promoting it, Jon McGlocklin, gets two to three percent of every dollar raised. I doubt if most people viewing the show — or many donors to the fund — realize this. I think the MACC Fund, and its board members, could set the bar a little higher for what the group actually delivers to charity.

-I should note that I’m a fan of Gary D’Amato’s sports stories. He’s a good writer. He’s simply the wrong guy to cover the non-profit sector.

-Speaking of sports, Lori Nickel did a fun profile that, in passing, told us about yet another economic analysis that found no benefit from taxpayer-funded stadiums. It turns out Brewers pitcher Burke Badenhop was an economics major who took three classes with professor Tim Fuerst, then at Bowling Green University. Fuerst called Badenhop “a very hard worker”, then added that Badenhop “wrote a term paper on the efficacy of public-financed stadiums. After reviewing the evidence, he concluded that cities/states should not subsidize the construction of ballparks. . . . they are a boondoggle. I wonder if he still feels this way.”

-Finally, another follow-up related to my column reporting on the high rate of black imprisonment documented in a study by the UW-Milwaukee Employment & Training Institute. Its director, John Pawasarat, did a Sunday Op Ed for the Journal Sentinel which offers some thoughtful solutions to the problem.

15 thoughts on “Murphy’s Law: Does MACC Fund Give Enough to Charity?”