No Country for Black Men

New study shows Wisconsin leads the nation in black incarceration, with a shockingly high rate. Why?

As executive director of The Sentencing Project in Washington D.C., Marc Mauer has studied racial disparities in sentencing for decades, yet even he is stunned by the statistics in a new report by the UW-Milwaukee Employment & Training Institute (ETI).  The study found that more than half of all African American males in their 30s and 40s in Milwaukee County have served time in state prisons. 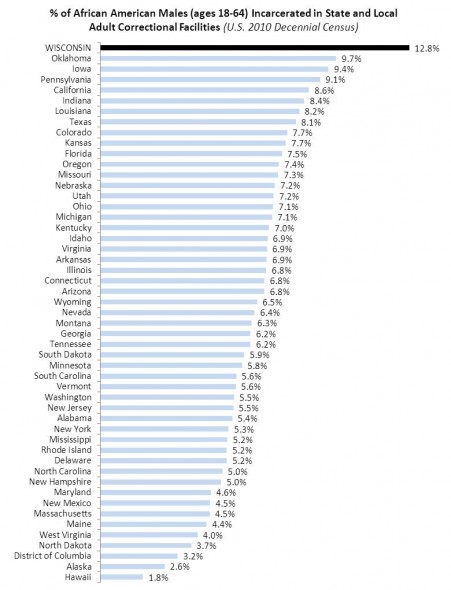 No state comes close to Wisconsin in imprisoning black males. The study found that 12.8 percent, or 1 in 8 of African American working age men, were incarcerated. That rate is 32 percent higher than the second worst state, Oklahoma, and nearly double the national average of 6.7 percent (or 1 in 15).

Nationally, Mauer notes, there has been a “40 year explosion” in imprisonment in the U.S. but the numbers really grew in the 1980s and 1990s, he says. A national push to get tough on drugs, truth-in-sentencing and “three strikes and you’re out” (meaning permanent incarceration) rules were among the factors driving the growth of prisons.

Drug offenses have been a big factor driving this wave of imprisonment. Forty percent of black males from Milwaukee County incarcerated since 1990 were drug offenders, the study found. “In the early 1990s African Americans had 4 times as many annual admissions for drug-related offenses as white men. As drug offenses soared in the 2002 to 2005 years African American men had 11 to 12 times as many drug-related prison admissions as white men,” the study reported. 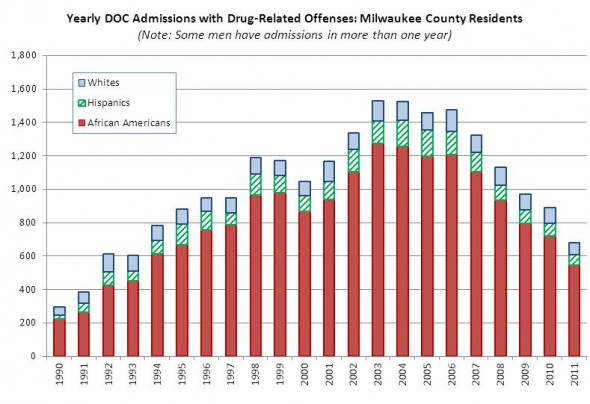 Much of this had to do with the difference in how crack cocaine was treated versus powder cocaine. Sentences for using or selling crack were much tougher, Mauer notes, and “80 percent of those arrested for crack were black,” he adds.

States also varied in how they handled drug offenders. “When it comes to drug offenses, there was a tremendous amount of discretion in how different cities dealt with it,” says Mauer. “You could have one community say we’ll go after the big guys. Other communities will say we’ll go after everyone down to the small user on the street.”

In the mid-1990s, a new trend emerged, as some communities created special Drug Courts that tried to divert addicts and small-time drug users from prison. Wisconsin, however, was behind the trend: the first such court was established in the late 1990s in Dane County and Milwaukee did not create a Drug Court until 2009. That may help explain why the ETI figures show the imprisonment of black males has begun to decline in recent years.

Another factor that may be driving the imprisonment of black males is driver license suspensions, says John Pawasarat, executive director for ETI and lead researcher for its study. The institute has previously found that a high percentage of African American males lack a valid drivers license. Often their license has been suspended because they owe fines for unpaid parking tickets, equipment violations, etc..

“Without a license, workers are unable to legally drive to job sites throughout the metro area and subject to police arrests, particularly when driving through suburban communities,” the study notes. And those stops can sometimes result in police noticing the driver possesses illegal drugs, which can then lead to imprisonment.

“For many inner city neighborhoods having parents or other family members incarcerated in state prison (or in the Milwaukee County House of Corrections) has become a way of life, given the extremely high rates of incarceration,” the study notes. “The prison/ex-offender overlay has profound implications for youth and families as high poverty neighborhoods are rife with hardened criminals, drug violence, and lack of safety for youth. At the same time, many ex-offenders and current prisoners are themselves parents – and struggling (or not struggling) to support their children financially and emotionally and to reattach to their families. 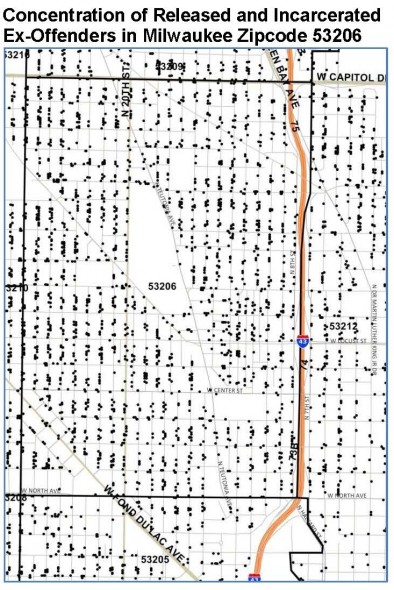 The most deplorable example of the impact of incarceration can be seen in the 53206 zipcode, from North Avenue to Capitol Dr. and I-43 to to 27th Street. Of 7,628 black men aged 18-64 in the zipcode, about half, or 3,837, have served time in state prison. “By 2012 nearly every residential block in the neighborhood had multiple numbers of ex-offenders with prison records,” the study notes.

State Sen. Lena Taylor (D-Milwaukee) lives in this zip code. “It’s horrific and nothing to be proud of,” she says of the rate of black imprisonment. “It really is the highest rate in the world, when you consider that Wisconsin leads the nation and the U.S. has the highest rate of incarceration in the world.”

Taylor says there are many points throughout Wisconsin’s law enforcement system that can result in differential rates of imprisonment. “That includes the police and where they chose to police and how they police, the prosecutor’s office and how they use their discretion, the access to lawyers for suspects…” 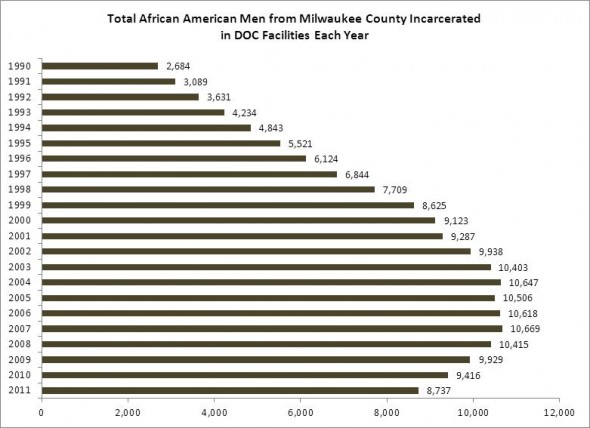 Taylor notes that the state brought in experts from the nationally respected Justice Center, which found problems with Wisconsin’s system of rehabilitating ex-offenders. “The average re-entry rate into prison for ex-offenders is like one year in Wisconsin versus the national average of five years,” Taylor notes. “Often it’s not because of new offenses but because of probation or parole violations.”

Pawasarat points to something basic like making sure young black males have a driver’s license, which can often be a key to getting and maintaining a job. The study notes that only 17 percent of African American male teens (ages 16-17) in the city of Milwaukee have a driver’s license compared to 64 percent of white male teens (ages 16-17) living in Milwaukee’s suburbs.

“A large population of African American males is approaching adulthood in Milwaukee County,” the study notes. “These young men will either swell the ranks of Wisconsin prisons, most initially incarcerated for drug-related offenses, or successfully join the workforce contributing to the economic health of their families and the community.” A focus on employment training and job placement for young African American men “is crucial,” the study adds, “to prevent a new surge of prisoners into the state DOC system.”

41 thoughts on “Murphy’s Law: No Country for Black Men”