It may have the freshest beer and the most outspoken owner in town.

Sh-h-h. You’re in Romans’ Pub and owner Mike Romans doesn’t like it if things get too noisy.  Last week, one group was so loud the other customers couldn’t hear one another, so Romans shushed the rowdy bunch. “They told me, ‘I’ve never been shushed in a bar before.’ I said, ‘You’ve never been here before.’” 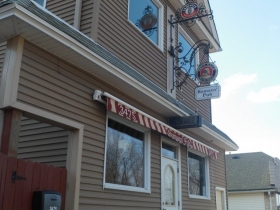 Romans has been running his pub at 3475 S. Kinnickinnic Ave. since 1978, and he doesn’t take any crap or mince any words. He knows his own value: “People come in here to see me,” he says, “not other bartenders.” And he knows how he wants the bar to run: “Some bars take everybody’s buck, but I don’t have to. If you come in here drunk, I won’t serve you.” And he doesn’t want any birthday parties or pub crawls. “I don’t want them disrupting the place and running off my good customers.”

The building he owns was built in 1885 as a tavern and stagecoach inn, where the stagecoach stopped a couple times a day as people traveled between Chicago, Kenosha, Racine and Milwaukee. The current floor and ceiling are original to the building, as is the bar, a Brunswick model constructed by Schlitz carpenters.

In 1919, Anton and Catherine Trochta took over the tavern, running it together until 1932 when Anton died. Catherine then took over running the bar, as well as the rearing he couple’s seven daughters, all on her own. During Prohibition, the tavern operated as a speakeasy. A worn line on the floor, stretching from the bar to the bathrooms, marks where a wall used to be, separating the legal lunch counter in front from the back, where customers could sneak in for an illegal drink. As he remodeled over the years, Romans recalls finding corks and bottles stashed in places. “It was busted (by federal agents) a bunch of times,” he says of the bar. Years ago he’d hear from older customers about those days. Each of the daughters would grab a bottle and hide it from the feds, the story goes. “Back then Morgan Ave. was a dirt road, and they remembered the Feds pouring the booze out in the dirt road.” 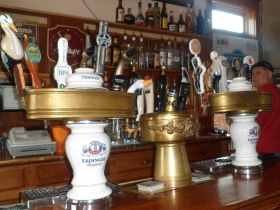 Behind the bar at Romans’ Pub. Photo by Audrey Jean Posten.

In 1946, Catherine Trochta handed over the tavern to a daughter and son-in-law. The couple ran the establishment until 1978 when Romans took over. By that time, he had been bartending for seven years, getting his start as a waiter and bartender at the Milwaukee Country Club when he was just 17. Prior to taking over his own pub, he was managing a bar called Arcana on Howell Ave. “I was working so hard for someone else, so I thought, ‘Why not do something myself?’” Romans says. For the first seven months, he operated his tavern with a partner, but his friend soon got involved with a supper club venture, so Romans bought out him out, becoming sole owner. Not long after, the friend’s venture fell through and he came crawling back. Romans wasn’t having it: “Uh-uh. You’re gone, you’re gone.”

“I took what I learned and put it together here,” says Romans, reflecting on his prior bartending and managing experiences. “So far it’s been a good formula.” However, it hasn’t always been smooth sailing. In 1996, Romans’ Pub was falling on hard times. Looking for a drastic change, Romans decided to start serving specialty beers in order to better educate peoples’ palettes. Around that time, he also had a falling out with Miller Brewing Company that ended with them warning that he would never make it in the city without them. Years later, the pub is still thriving. In fact, Romans says last week, which was beer week in Milwaukee, was his busiest week ever.

Romans still has Miller Lite for the people who really want it, but he “saves or converts souls every day” when he can convince them to try something else.

“Craft beers are really doing well right now,” he says. “They’ve shown double digit increases in sales every year. It’s the bigger breweries who are struggling.” Romans’ beer selection is constantly changing. In the last week and a half alone, he’s tapped 17 barrels. The selection list is constantly updated on a huge board hanging in the pub. Romans handles this himself, climbing up on a ladder to painstakingly write in all 30 choices with perfect penmanship. “Not bad for a shaky old man,” he jokes. The current beer selection can also be found on the pub’s website. 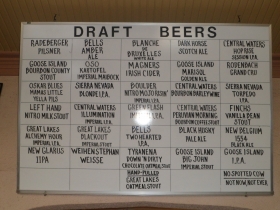 One beer people will never find on the list is the cult favorite, New Glarus Spotted Cow. One corner of the board even says “No Spotted Cow. Not now. Not ever.” That note has been up on the board for ten years. Says Romans. “That’s an entry-level, training wheels beer.” So which beers are the best? What does he recommend? Don’t ask unless you’re ready for a uniquely Romans response: “First of all, it’s all good or else it wouldn’t be here. Then, I recommend you tell me what you like so that I can recommend something.”

Odds are his recommendation won’t be a Milwaukee beer. “I’m not a big fan of the local breweries,” Romans says. “I don’t think there’s a decent brewpub in the city.” However, he does like Lakefront Brewery. He thinks they’re really coming along. The beer just doesn’t seem to sell as well at his establishment.

Romans attends beer festivals, including the Great Taste of the Midwest in Madison and Denver’s Great American Beer Festival, in order to sample beers and build his relationships with brewery owners and distributors. “Selecting beers is just second nature to me now,” Romans says. “I know what’s good and I know what the customers like.” Draft Magazine agrees. This year the magazine listed Romans’ Pub as one of the 100 best beer bars in the country.

Yet despite his keen interest in beer, Romans has never been tempted to make his own. “There is just too much good beer out there,” he says. However, there are hops growing on the tavern’s patio that some home brewers have taken to make their own beer. Romans says some of it is impressive. “A lot of the home brewers are hen-pecked guys,” he remarks. “It seems like the more hen-pecked they are, the better the beer.”

In Romans’ book, the best beer experience comes from three things: clean glasses, clean lines and fresh beer. Romans is a Certified Cicerone, the equivalent of what a sommelier is to wine. According to the Cicerone Certification Program, cicerones are “those with proven expertise in selecting, acquiring and serving today’s wide range of beers. Only those who have passed the requisite test of knowledge and tasting skill can call themselves a Cicerone.”

In 2006, Romans’ Pub also installed Glycol-cooled lines that work with a custom gas blender in order to create a state-of-the-art delivery system from keg to glass. The beer is 40 percent nitrogen-poured, which produces smaller bubbles than carbon dioxide, making the beer creamier and smoother.

Sometimes aspiring bar owners ask Romans what the secret to success is. He offers a few simple sentiments: “Don’t be afraid to work. This business is like dog years. It’s seven times harder than any other. Keep the overhead low and do as much of the work yourself as you can. Remember that no one can run your bar better than you.”

Any other advice? Don’t ask. “That’s all you’re getting out of me.”