Her family was musical but Ullenberg became an ad designer who tries to “sneak in” a little art. 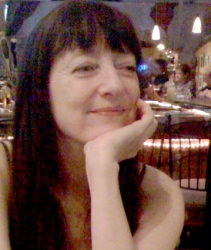 Frances Ullenberg would fit right in on the set of AMC’s “Mad Men,” except that she’s a she, but she’s done advertising and branding designs for countless corporate clients, winning more than 150 industry awards for her work in what was once a man’s world. Her friends call her Frank, which was her paternal grandpa’s moniker, and brings us to the story of her family.

Grandpa was a handsome man, she says, who led the band for the July 4th celebrations at Kosciuszko Park on Milwaukee’s south side. Dressed in white, with a straw hat, he made her proud. Her grandma, also clad in white, was in charge of a tent where she gave prizes to the kids who won contests, like the bicycle decorating competition. The leftover prizes went to Frances, along with free Dixie cups. 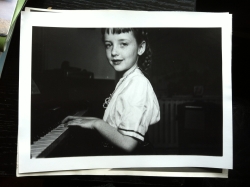 Going back further, grandpa led a ten-piece orchestra at the old Riviera movie theater at 1005 W. Lincoln Avenue, built in 1920 and designed by architects Lesser and Schutte. Back in the day it featured kiddie matinees in the Polish language and a chap named Casimir Uszler played a $12,000 organ. Ullenberg’s family still has one of grandpa’s movie scripts with his musical notations for the orchestral accompaniment.

Frances Ullenberg’s early life was filled with the sounds of music. Her father, Ralph, and his two brothers were also musicians. Her uncle Erv was on TV in the late 50’s, as the emcee and string bass player with Joe Shott and the Hot Shots. Bob, another uncle, was a jazz pianist. Her father taught music at Steuben Jr. High School, leading their highly regarded orchestra and, until his death, continuing to explore what he imagined were Chopin’s fingerings for his beloved compositions. 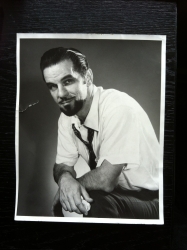 Her German-born mother Maria, met and wed Ralph during the occupation following World War II. Ullenberg likens her mom’s life to that of Maria in “The Sound of Music,” right down to being schooled at a convent. According to family legend, she was offered a position as Mamie Eisenhower’s personal secretary, but the newly wed Maria moved to Milwaukee and worked as a waitress and singer at a supper club known as The Escape, a hangout for touring celebrities. Sometimes she invited her daughter along, and one night Frances Ullenberg found herself sitting next to Liberace. 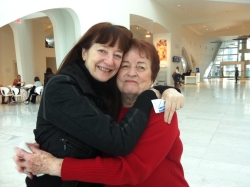 Frances and her mom at MAM.

While doing her housework, her mom would play records and fill their house with the sounds of opera and musicals. She and young Frances would sing along. “I can still sing most of “Oklahoma,” or “My Fair Lady,” she says.

Her family’s first home was at Parklawn, which she describes as a sweet little housing project off Sherman Blvd., near Capitol Drive. She can vividly recall the red brick trimmed in white, with a front door trellis and chintz curtains on the windows. “Like the kind you’d see in the movies,” she says. When her dad received his degree from UW-Milwaukee and secured a teaching position at Steuben, they moved to a little house on 40th St., near Fond du Lac Avenue, and a few years later, to a brand new subdivision in Brown Deer. After her years in the city and being able to walk or jump on a bus to get to a movie, she didn’t like living where you depended on a car.

She solved that when she enrolled at UW-Milwaukee as an art major focused on painting and photography, and settled in Riverwest to live the life of a poor art student. She had a brief stint in Seattle, another in Germany, pursued graphic design studies in Japan and lived 11 years in New York City before returning here to live happily ever after on Milwaukee’s East Side.

As a reward for moving back here from NYC, she spent one weekend seeking digs with a must-have lake view. She looked at the old Exton Apartments (a 1938 Art Moderne building) at 1260 N. Prospect, the majestic white Cudahy Tower (1927 Beaux-Arts), and the rambling White Manor perched on a bluff where Juneau ends.

But she ultimately swooned over the architecture at the Newport (Russell Barr Williams, 1962) on Prospect Ave., and when toured to the roof deck, broke into tears over the view. She dug for her checkbook, and, in 2001, entered the world of the 14-story cooperative featuring soundproof floor and walls, all gloriously conceived by the architect from Oostburg who studied with Frank Lloyd Wright, and among other beauties, designed the Eagles Ballroom. One of the classic furnishings in her Newport space is a silver diamond-patterned Bertoia “Bird Chair.” 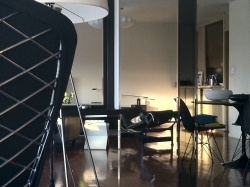 Ullenberg’s digs at the Newport.

For years, Milwaukee’s circus impresario, the late Ben Barkin, occupied a huge ground floor unit at the Newport replete with a Japanese garden and a pond sporting exotic koi, each element linked with a footbridge. It was music to Ullenberg’s ears: “You could hear the pond gurgling from the formal stone terrace,” she recalls. That terrace is where she goes to watch the moon and the McKinley Marina harbor lights sparkling in the water.

Ullenberg works just less than two miles away, at her one-person design office in the Third Ward’s Marshall Building, where she’s listed simply as “Frank” on the building’s directory. Sometimes she bikes to work though she has what she calls “the perfect car” — a 2000 Audi TT Roadster, along with a metallic gold (inside & out) ’66 Pontiac Bonneville for summertime motoring.

Her New York City years (1990-2001) taught her a lot about branding well-known companies. She was one of several Design Directors of Desgrippes Gobe & Associates (with offices in both NYC and Paris). Currently, most of her work comes from New York and Los Angeles-based design offices. Clients, for example, like the Frederic Fekkai salons and products, keep her busy designing their branding, advertising and packaging. Her work has found its place in Vogue and Cosmopolitan Magazine ads, and in stores featuring Coach products. Brooks Brothers, Saks Fifth Avenue, and Victoria’s Secret are a few brands she’s aced. She’s been told her work for Mark Cross is in the permanent collection at the Chicago Athenaeum Museum of Architecture and Design, but she’s never been there for a fact check.

Meanwhile, music has hummed through her life. For two decades she played with the Milwaukee Mandolin Orchestra (at 100 years old, the oldest such ensemble in the country), and readers may recall her experimental work in the 1980s with Pioneers of Modern Typography, who did their multi-media Dada thing at Café Voltaire in Bay View.

Ullenberg says she knew as a UWM student that she wanted to learn all aspects of modern commercial printing/photographic/reproduction technology. She’s tried to use that knowledge to “sneak a little art or beauty into the lives of people,” she says.

“That’s still behind what I try to do today.”