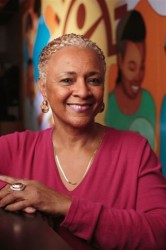 When June Martin Perry rises in the morning, she can enjoy the view from her Prospect Avenue condo. From floor fourteen, on a clear day, Lake Michigan and our city are clearly visible. She begins her day by reading the New York Times and the Milwaukee Journal Sentinel.

Born in her namesake month in 1947, in Columbia, South Carolina, June’s father was an electrician who also owned a barbershop and her mother was an artist and special education teacher. Her grandfather was the first black licensed electrician in the state (1915) and had an electrical contracting company that was passed on to June’s father and then to her brother. Perry attended public schools and graduated in 1965 from C.A. Johnson High School in Columbia (in her senior year as a member of Delta Sigma Theta Sorority, she was a debutante).

Columbia was a culturally rich community treated to performances by top touring groups: Metropolitan Opera stars, The Philadelphia Orchestra, and the Chicago Opera Ballet. To this day, Perry remains a fan of ballet. 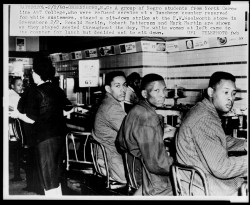 Her brother Mark Martin and cousin Ronald Martin in the 1960 lunch counter sit-in. Photo from the Library of Congress.

But it wasn’t all wisteria and mint juleps growing up in South Carolina. Perry and her extended family lived amid the heat of the Civil Rights activity; in fact, her brother Mark Martin and her cousin, Ronald Martin, participated in the 1960 lunch counter sit-in at the F.W. Woolworth store in Greensboro, which is documented here. That’s Mark on the right, and Ronald on the left, captured in a photograph in the New York World Telegram & Sun. The chap between them is Robert Patterson. All three were students at the Greensboro Agriculture and Technical School.

Perry vividly recalls the racial divisions: “I remember riding on the back of the bus, sitting in the balcony for coloreds at the movie theatre, drinking from colored fountains and when my family traveled, not being able to stay in hotels and eat in restaurants. We stayed with relatives or people who were a part of the church or social networks my mother belonged to.”

Perry’s father died in 1957. “My mother raised us as a single parent after that, never remarried. My grandparents lived across the street from us so they were there every day as well.” She also recalls driving her electrician grandfather (who also owned a lot of real estate), to collect monies from white people who he had done work for, and he had to go to the back door. “But,” Perry says, “he took it all in stride and became a wealthy man.” 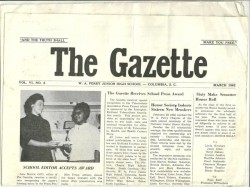 Accepting a certificate for a winning Press Project.

In 1962, as editor of her junior high school newspaper The Gazette (whose motto was, “The Truth Will Make You Free”), June appeared in a front page photograph, accepting a certificate for a winning Press Project entry sponsored by the local Tuberculosis Association. These were the days of the puffed hairdo’s (ala American Bandstand).

With brother Mark as a role model, June got involved in the Civil Rights movement. She joined the March on Washington, and while in college involved herself in demonstrations. She attended North Carolina Central University in Durham, founded in 1909 to serve black students, and graduated in 1969 with a degree in Sociology. By the time she headed to graduate school, she’d decided community organizing would be her focus. The idea of serving seemed to run in the family. A sister, Celia Boykin, worked as a Child Care Center Director and then as a child care licensing consultant in D.C.

It was graduate school that brought Perry to Milwaukee:

In 1971 she received her MS in Social Work from UW-Milwaukee. She wasted no time starting her career: Hired by the Milwaukee County Department of Public Welfare, she worked for a year as a child protective service investigator before moving on to serve as a supervisor in the Family Counseling Unit, then (in 1973) as a supervisor in the Adult Service unit, and finally (1974-’75) as a quality assurance coordinator for purchase of services with Milwaukee County.

Not content to stay at the county, in 1975, she founded (along with fellow graduate student, Geri McFadden), New Concept Self Development Center, Inc, a private non-profit, a youth-serving agency and mental health clinic. As CEO and President, she watched it grow from a small agency with two staff members and an annual operating budget of $35,000 into a nationally recognized human service agency. “Promoting self sufficiency,” is part of its mission statement, and Perry surely exemplifies that motto. In 1978, she secured a long term contract with United Way of Milwaukee, thus ensuring the social service agency’s continued funding.

In the early 1980s, she developed Milwaukee’s first community-based mentoring program for young girls in public housing projects: “Each One Reach One.” It became a model for future mentoring programs in Milwaukee and lives on at New Concept.

Perry’s list of awards read like a poem to professionalism: the Milwaukee Community Journal Lifetime Achievement Award, Professional Dimensions Sacajawea Trailblazer Award, and in 2001, the President’s Points of Light Award from the National Foundation. There have also been awards from Tempo, the Milwaukee Business Journal, the Wisconsin Fatherhood Conference, and many other groups.

Fellowships came her way too: in 2000, a Fellowship from Carnegie Mellon University in Pittsburgh, and in 2001, a graduate certificate in Executive Program for Non-Profit Leaders, from the Stanford University Graduate School of Business.

Though she retired from New Concept in 2006, the agency still operates and serves hundreds of families and youth annually. It’s currently located in the MLK Jr. Community Center at 1531W. Vliet Street.

So what has she been up to since her “retirement?” Well, for starters, she is a co-owner and founder of BestEd, LLC, an online site (www.bestedbusiness.com) for classroom, school and office supplies and equipment. As a co-owner (her partner, Beth Bauer, was the former owner of Teacher’s Pet), Perry seems to have landed in just the right spot. Personal relationships like this, Perry says, have helped her throughout her career.

And finally, we asked who she’d like to see as the next President of the United States?

“The MOST qualified candidate,” she says “Not hung up on it having to be a person of a specific race or gender. Good to know that we can elect the best person for the job and not exclude anyone because of race or gender.”

And the truth will make you free.