Where Dogs Go To Die

Critics of the MADACC animal shelter say it doesn’t do enough to prevent dogs from being euthanized.

In July 2011, the University of California-Davis did a study of the Milwaukee Area Domestic Animal Control Commission, or MADACC, that offered much criticism of how the animal shelter operates. The study, commissioned by the Friends of MADACC, a non-profit support group for the shelter, echoes concerns raised by some volunteers who have worked at MADACC. Add the fact that MADACC has had considerable turnover of executive directors in recent years, and it’s clear the shelter has problems it needs to solve.

Karen Sparapani, the new executive director hired in February, concedes that MADACC has problems, and promises to make reforms. MADACC opened in 1999 and serves 19 municipalities, providing Milwaukee County’s animals with shelter and care. Its creation allowed the Wisconsin Humane Society to admit fewer animals and pick and choose which ones it handles, leaving MADACC to handle a bigger volume of animals, including those, like pit bulls, that are unlikely to find an owner and eventually must be euthanized. Critics point to several key issues that Sparapani needs to address. 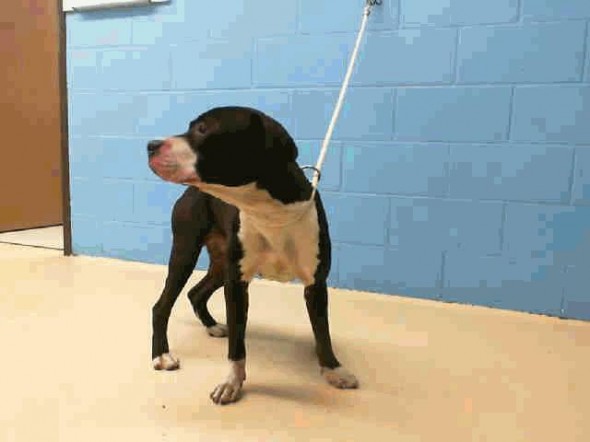 A dog with an uncertain future.

MADACC takes in roughly 13,000 stray, abused and abandoned animals a year. In January and February of this year, the shelter euthanized nearly 500 animals, and in 2012, it euthanized 5,357 animals. On its website, MADACC says it only euthanizes as a last resort. Pit bulls and adult cats are the two species most commonly euthanized, according to Sparapani.

Upon entering MADACC, an animal is given a seven-day “stray hold,” in accordance with state law, in which no rescue or interested party may interact with them. They are not walked or played with. They are in a state of limbo, waiting. Then on the eighth day, if an owner has not come to reclaim them, the animal becomes MADACC’s property.

This is a long time to hold animals on stray hold compared to animal shelters in other states, Sparapani says.

Marisa Kraft, MADACC volunteer and member of the Milwaukee Animal Alliance, says many dogs may meet their death as soon as the stray hold period is over, on the morning of the eighth day, before MADACC opens its doors to the public. This leaves no opportunity for an individual or rescue group to meet the dog.

Jessica Huber, MADACC’s community outreach and volunteer coordinator since June 2012, says this is a misconception, and the majority of the animals are not euthanized on the eighth day. “I don’t know where that comes from,” she says. “It is very variable (depending) on time, space, temperament and the health of the animal.”

According to Nancy Annaromao, a former volunteer who assisted MADACC with animal placement, Wilken would go through the kennels and choose dogs to be euthanized based on the shelter’s need for space. Pit bulls were most likely to be chosen, because it is harder to find owners for them.

In an interview, Wilken confirmed that it was impossible to hold on to dogs due to space issues, especially in the summer. Pit bulls were the first to be euthanized regardless of their temperaments. “Every shelter’s overwhelmed with them,” Wilken says. “In summer time they didn’t even get temperament testing a lot of times because there were so many. You’re only able to place so many pit bulls.”

9 thoughts on “Where Dogs Go To Die”