Serving the MLK neighborhood for 40 years, Styles has become a key community institution. 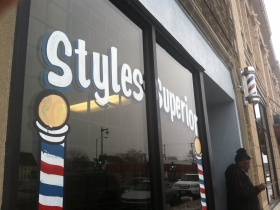 It’s Saturday morning, and sounds of clippers and razors mix with the buzz from the television sets at Style’s Superior Barber Shop. A row of customers sit, waiting for their turn in their favorite barber’s chair, but the busiest time, when the shop really fills up, is yet to come. By then, the conversation will get animated, maybe about sports and how the Heat are going to lose to San Antonio, but it could cover any subject. It’s all part of the unique atmosphere at Styles.

Style’s Superior Barber Shop has served the MLK community for over 40 years, since before Third Street’s name was changed to Martin Luther King Dr. Located on Third and North Avenue, the shop opened in 1971 as Bill’s Superior Barber Shop, owned by Bill Corder until 2006, when Deveron Moore became the proprietor. Today it is one of the oldest businesses in the area, with deep roots in the community.

The MLK area, also known as Bronzeville or the Harambee Neighborhood, has quite a history. Once known for its thriving businesses and nightlife in the black community, the neighborhood declined badly after the I-43 expressway was built in the 1960s, causing the tear-down of many businesses and homes. Some businesses shut down, and many others moved away.

After 12 years spent working for others, Moore knows a thing or two about staying in business. “You can be in and out of business just as quick as you can open up,” Moore says. The main thing, he says, is to stay on top of your most important things, “your bills, your taxes, your employees. If you don’t have that, you can’t grow.”

Craig Wroten, a community organizer for the Harambee Obudsman Project, works in the area and has been coming to the shop for nearly a decade. He appreciates the relaxed, family vibe he gets from being at the shop. So much so that he occasionally hangs out and does some of his work at the shop.

“The black barbershop has always been a staple in the community,” says Wroten. “It’s the black man’s country club.” 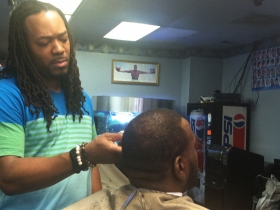 Getting a haircut at Style’s Superior Barber Shop. Photo by Tony Atkins.

For generations, the barbershop has played a key role in the black community. There, people from many different backgrounds, generations or financial situations gather to talk about anything: from sports to religion to food to politics, usually nothing is off limits. Beyond the chatter, the barbershop has served as a place to do business, provide informal counseling and pass down history to the younger generation.

Moore started out cutting the hair of his friends, when he was in high school. “My granddad had a shop since the 60s. I am a third-generation barber,” he says. But he resisted the business until he became a father and needed to support his child. “After I had my first daughter in ’92, I decided that I had to do something.”

Moore starting working at Handsome Barber Shop, at 2701 N. Teutonia Ave., in 1994. The shop, owned and operated by his father and uncle, was opened by his grandfather and has a long history in Milwaukee. But with his dad and uncle in charge of the family business, there was no room for Moore to grow within the shop. “It was time for me to move out and do my own thing,” says Moore.

Moore’s took a job working for Corder at Bill’s Superior in 2004, and after two years, bought the shop before Corder passed away.

Moore has proved himself a survivor. In 2008, during his second year as owner, the Great Recession hit and wreaked havoc on the economy. Many businesses in the area closed or move away, but Styles survived.

One institution lost during that time was the Black Holocaust Museum, which faced leadership and financial problems after the death of its founder James Cameron in 2006. The museum left the neighborhood without an anchor institution and a repository of black history.

Ron Corder is a barber at Style’s Superior and son of the shop’s former owner. Ron has worked at the shop for over 20 years and says the loss of the museum was big for the community. “I had an opportunity to go there. There is a lot of history in there and I don’t know where to get the history anymore,” Corder says.

Style’s certainly does its part; it’s often a place where young and old hang out and talk about the past. “In barbershops, you get a lot of current events,” says Corder. “You get people talking about different times in history because you have a lot of old timers mixing with younger people.” 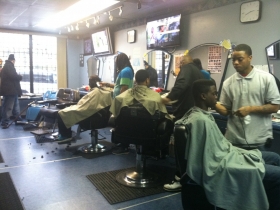 Barbershops serve the community in another way that isn’t often mentioned. It is often said it takes a village to raise a child. Often, the barbershop serves as that village. In a part of town where there are many single mothers raising kids without father figures, the barber may sometimes step into that role.

“We’re your social workers, we’re your father figures,” says Moore. “It’s a trip how sometimes a mother will come in asking ‘could you talk to my son?’ For whatever scenarios, whether its grades, or they’re acting out in school or just not paying her any attention. The actual father isn’t there.”

Moore says the mother may see the barber as a male figure that could potentially get through to the child. “The more you can offer the more effect you can have,” says Moore. “You don’t ever know what the smallest piece of advice can do to somebody.”