Mad Planet Dances Through the Decades 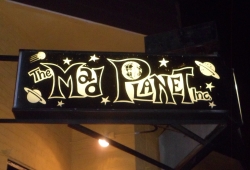 “It’s consistent,” says bartender Robin Koutecky of the Mad Planet. Meaning patrons always know what to expect from one of Milwaukee’s best-known dance clubs? Nope, “more like consistent in that you can expect the unexpected,” Koutecky clarifies.

Mad Planet is more than just strobe lights, pulsing beats and gyrating bodies. It’s a hybrid, a mix between dance club and corner bar. The interior boasts an eclectic mix of artwork, colorful lights, pop culture memorabilia and, er, mannequin parts. Really. One full-bodied woman mannequin stands in a lighted corner in the lounge area by the club’s main bar. Nearby, a pair of legs holds up a small side bar. In the back, another pair of legs, painted with billiard balls, holds up a side bar near the pool table.

The craziness continues on the walls where murals depict such creatures as an octopus, a fire-breathing dragon and the Wizard of Oz’s flying monkeys. Other paintings – mostly from local artists – feature naked, contorting bodies. Behind the main bar sits a collection of figurines – everything from Pee Wee Herman to Gumby to Bert (from Bert and Ernie) wearing googly-eyed glasses. Barbie dolls with painted, glittering bodies and big hair hang from the ceiling. “Kind of a gothy atmosphere,” says customer Tony Lawrence. “It reminds me of the basement where my college fraternity used to have parties.”

As of a few weeks ago, Mad Planet also boasts a new drink – the scorpion shot. It comes in flavors like apple, blue raspberry and cranberry and each one contains a small, organically-grown scorpion. Customers can dump out the scorpion, then down the shot with anything he or she wants. According to Koutecky, Mad Planet is one of the only places in town offering this drink option. Last weekend, she says there were at least 10 customers brave enough to try one.

The woman behind Mad Planet is Rosemary Silagy. Silagy grew up in Chicago where she started bartending. While working at the Lizard Lounge, the owner approached her and asked if she’d be interested in moving to Milwaukee to run a club he wanted to open at 533 E. Center St. in the Riverwest neighborhood. That was back in 1990, and Silagy’s been holding down the fort at Mad Planet ever since. Now, she’s also the sole owner.

“I’ve been coming here since the beginning,” says Jennifer Schmitz, who’s also been working at Mad Planet for the last 10 years. Other Milwaukee dance clubs, like Eso and Club Marilyn, had closed by the time Mad Planet opened, “so everyone was looking for a new place,” Schmitz recalls.

A lot of those early customers continue to stick around. Sally Evanson first visited Mad Planet 17 years ago. It was the second bar she came to after moving to the city. “Someone brought me here for ‘80s night,” Evanson says. “I only come here for that anymore.” Every Friday night, is retro dance night featuring songs from the 1980s and ‘90s. “We’ve had ‘80s on Friday since Jesus was a baby,” Koutecky jokes. “Mad Planet is just a good place for people who want to relive that time and music,” Schmitz says. “Retro is always big, no matter what.”

And no matter the age group. Older patrons who remember the ‘80s and early ‘90s share the dance floor with 20-somethings who were just babies when the club first opened. “People always ask me, ‘Well, who comes here?’” Koutecky says. “I say, ‘Well, everybody.’” Lawrence is hoping to capitalize on the patrons’ retro fascination. He recently formed a Depeche Mode cover band called Milwaukee Mode and hopes to play at Mad Planet. “As soon as I started, this is where I first went,” he explains. “They recently had a Depeche Mode vs. New Order dance party, so I knew there was already a following of people who like the band.”

For those who aren’t big on dancing, Mad Planet also offers live music on Saturday nights and random week nights. “Mad Planet really introduces people to a lot of bands,” says customer Christina Cooley. Some acts have even gone on to achieve national success, including Arcade Fire, the indie rock band that won the 2011 Grammy for album of the year.

Mad Planet has a broad welcome mat, says Koutecky, pointing to a group of 20-something patrons: “That’s just a bunch of Riverwest kids hanging out. They’re probably not gonna dance, but that’s fine. Nobody judges. It doesn’t matter if you’re a hipster, goth or drag queen.”

Cooley agrees: “You don’t need to be anybody. You can come and feel like you’re a piece of everything.”