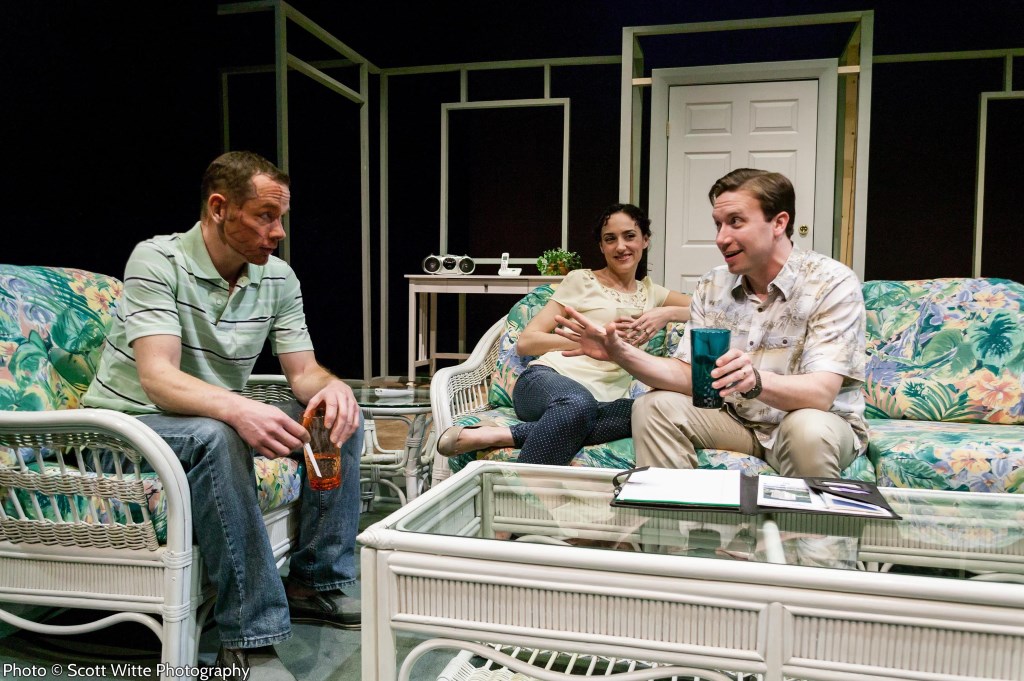 Grace’s opening scene feels like a gimmick. Beginning with a lone actor on a couch with a gun, the cast plays out the final scene in reverse order, a meaningless blur of words and gestures that can’t make sense, no matter how impressive or fascinating it is.

Have faith. By the time director David Cecsarini and his cast get through Next Act’s final show of the season, you’ll be repaid tenfold for taking the chance – as this beautiful production is easily one of the best I’ve seen all season.

The play’s action takes place between two neighboring Florida condos, one owned by new arrivals Steve and Sara (Rick Pendzich and Libby Amato), an Evangelical married couple pursuing a too-good-to-be-true hotel deal, and NASA engineer Sam (Jonathan Wainwright), a recluse wounded in body and spirit by a car accident that also killed his fiancée. In a remarkably insightful twist, playwright Craig Wright’s staging directions place those condos in the same physical space, visually juxtaposing the trio’s lives on top of each other from the moment the lights go up. 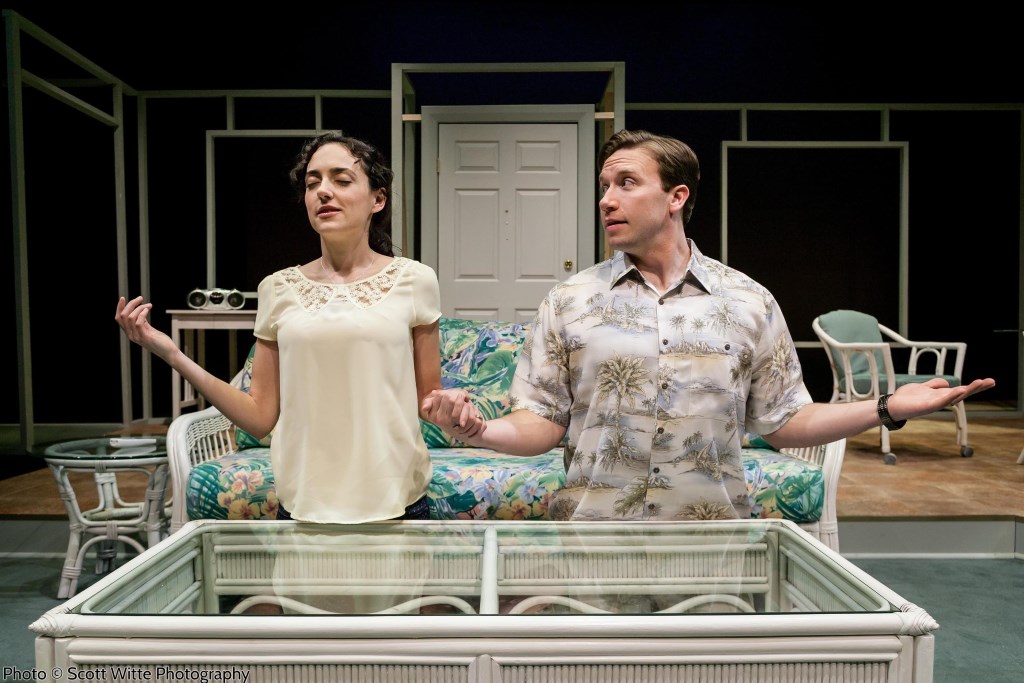 Steve and Sara have moved to Florida to capitalize on a real estate deal, but the deal will shake their faith and relationship. Photo by Scott Witte Photography.

The fascinating thing about Grace is the way it lets those lives interplay for so long before remembering it has plot points to deal with. The play quickly points out all the important details you need to know to see where it’s going – a real estate deal with a mysterious Swiss financier Steve has never met, marital strife between Steve and a lonely, isolated Sara, the introduction of equally lonely and isolated Sam thanks to an eccentric exterminator (John Kishline) – and then steps back and turns itself into a character study of the four believers and nonbelievers for effectively half the play.

And what characters we have. The exterminator, Karl, only takes the stage twice, but Kishline works wonders with him. The abrupt, blunt, atheist German is a splash of ice-cold water each time he breezes on stage, and the sheer incongruity of his presence and lines are nothing short of painfully hilarious.

Pendzich has the most thankless role; Steve’s a character who seems impossible to make loveable. He’s self-absorbed. He can’t keep himself from trying to politely but forcibly convert everyone he meets. In an argument with Sara, he breaks out Ephesians 5:22 – you know, the “Wives, submit to your husbands” one. But Pendzich does it somehow, convincing us to empathize with a man who believes he’s about to have everything so much that he can’t see it all slipping away. 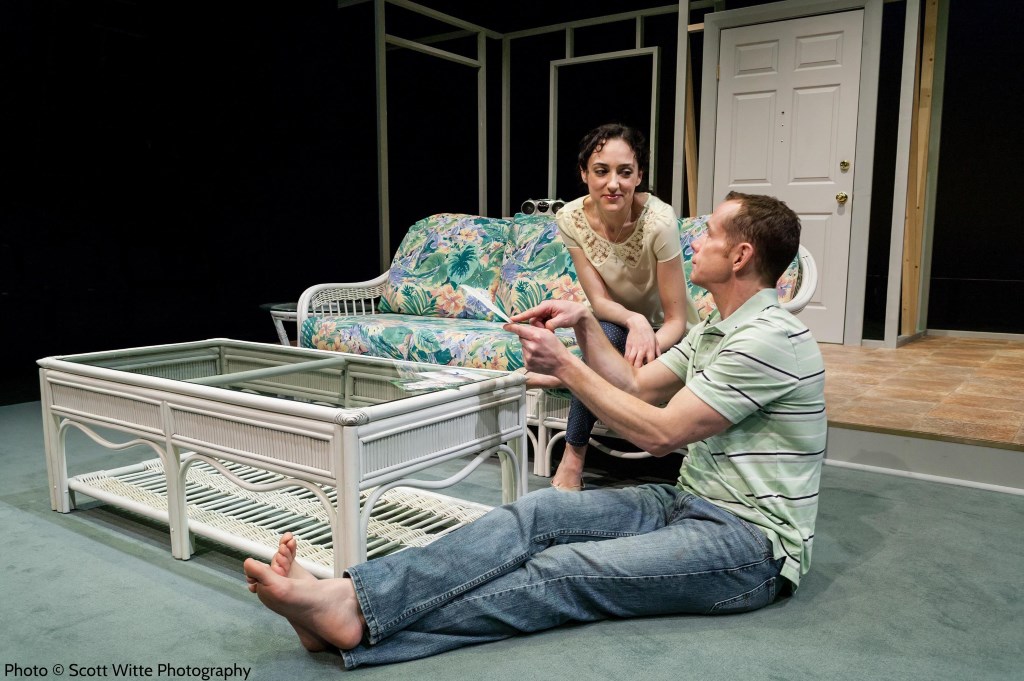 Sara and Sam grow closer over the course of Grace, but it’s a relationship that doesn’t develop entirely in the way expected. Photo by Scott Witte Photography.

Sara is as devoutly Christian as her husband, but Amato plays the role with a much-needed complexity that gives believers a believable, un-mocked character. Her less aggressive beliefs make her seem less attached to Christianity than Steve, but it’s a trick that sets up her most pivotal scene, and Amato’s majestic command of the stage makes it even more compellingly profound.

Sam’s backstory and injuries (facial scarring that requires a plastic mask, and a limp) sound like a Lifetime movie waiting to happen, but Wainwright never takes the easy way out into melodrama. He is angry, and sad, and lonely, but he never strays from a believably human palette.

This strong character work lays the groundwork for more serious meditations, as Steve, Sara and Sam grow ever more intertwined. The first act’s treatment of belief or unbelief is pretty standard; Sam gives the usual arguments for why God probably doesn’t exist, Steve gives the usual rebuttals about belief, with a few variations here and there.

But Grace transcends such simplicity in the latter half, brilliantly juxtaposing a scene where faith is shaken with another where faith is restored and forcing us – no matter what side you’re on ­– to see the other point of view from a true, undistorted perspective. It’s a moment that makes that final confrontation – both in retrospect and when it arrives for real – all the more horrible to imagine. It’s also a moment that makes belief – in God, humanity or even just that life is worth living – seem like the best investment.

0 thoughts on ““Grace” a play to believe in”