Overwhelming in its creativity

A collection of dances stun and dazzle at the Rep's Steimke Studio, although they sometimes do too much in the moment.

Luscious is the title of the Wild Space Dance Company’s current program. Anything luscious must overwhelm the senses, and Wild Space did Thursday evening at the Milwaukee Rep’s Stiemke Theater. But by definition, to be overwhelmed is to feel too much; Luscious could have used the occasional edit.

The night’s dances spanned a range of creative and sensual experiences, from classic structures to improvisation to incredible sound to comic parody. Mauriah Kraker opened with a hypnotizing solo by Debra Loewen, In this Condition. Jacque Troy’s beautiful narrative voice-over of Lydia Davis’ text accompanied Kraker’s light sensuality. In one of her most arresting movements, she rolled her long body along the floor, so calmly that you could watch her hair make a slow flip from one side to the other as her knees bent lightly from one rotation to the next.

In a more tongue-in-cheek moment, she moved backward and glanced over her shoulder as she lightly grabbed her bottom, right as the narrator spoke of melons. That narration got overtly sexual at times, producing a long string of connotative phrases (“anything wet and pink, anything hard, anything soft…”). Yet Kraker never appeared overt, only impassioned with a touch of come-hither. The voice-over gave way to some graceful Mozart and Kraker essentially repeated the dance. The same steps took on a fresh impetus under the influence of the music.

Perhaps the highlight of the program was the Layers, duet performed by Laura Murphy and guest performer Amanda Schoofs, both clothed in lacy black. They began with intertwining movements; they appeared to be learning as they advanced through this structured improvisation. They touched each other tentatively as they comically referenced performance notes written on their arms. Then, they spoke. “Let’s just, yeah, ok, let’s try again. Take it from the hug, yeah.” Their casual rehearsal nature turned into a surprising audio experience, as Schoofs and Murphy began cooing in improvisational tones.

At first they seemed to compliment each other, matching high notes and creating harmony as they continued to intertwine throughout the stage. Then, they began scuttling away from each other, touching an arm as if it burned and becoming breathy in their vocal delivery. At times Schoof’s reactions bordered on skat, with choppy exclamations and surprised tones racing from her throat. It was entirely original, breathtaking in its delivery.

The music is one of many components competing for attention in Fevered Sleep. As I tried to watch everything at once, I would catch a girl rolling off stage in the strangest fashion and think “I wish I’d seen all of that.” The music, intriguing as it was, hit what seemed to be its ultimate crescendo at least three times. All the heart pounding became a little labored, and it started to feel like we were being denied an ending.

Gelsomina Maria featured Jade Jablonski, alone against a deep red backdrop, flaunting a sleeveless black velvet dress in her own dance. In this shortest piece of the evening, Jablonski moved to Peter Sarstedt’s “Where Do You Go To (My Lovely).” Here the show shifted from stark beauty to a more playful sense of humor. Jablonski rose from her chair to run across the stage with a wild splay of arms and slightly manic smile. Toward the end she donned a red robe backwards, strait-jacket style, to create a strange image as she moved with it as if with a lover.

The finale, Loewen’s Chocolate Haze, for everyone but Jablonski, was straight comedy. It began wonderfully, with the girls shifting awkwardly to “Embracable You,” clenching fur capes. Moving forward, however, the components began to feel packed in and a little disjointed, although it’s tough to argue with their creativity. Much like the rest of Luscious. 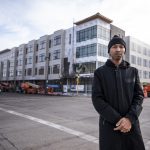