The quickly changeable March weather is a test. Some days everyone is biking. Other days almost no one.

By Dave Schlabowske, Bike Federation of Wisconsin - Mar 8th, 2013 09:41 am
Get a daily rundown of the top stories on Urban Milwaukee 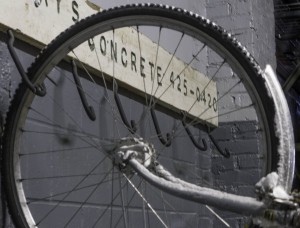 Plenty of parking spaces at the Bike Fed’s Milwaukee office when the temperatures were in the single digits.

I was glad to have my studded tires for my ride to work Monday morning. The temperature was 30 degrees when I pedaled out of my driveway, and the roads and trails were icy from all the sleet we had over the weekend. Perhaps the freezing sleet and cold morning put people off biking to work, but only two other people in the Bike Fed’s Milwaukee office of seven biked in to work.

Similarly, when the temperatures were below zero and in the single digits last week, I was the only Milwaukee staff person who choose two wheels over four. Even Jake, who bikes everywhere he goes, bailed when the windchill was -15 to -25. I guess he is a 363 day a year commuter.

Monday the mercury climbed into the 40s during the day and I listened to my studded tires buzz on the bare pavement as I rode to a lunch meeting. I even rode without a hat and bare hands. 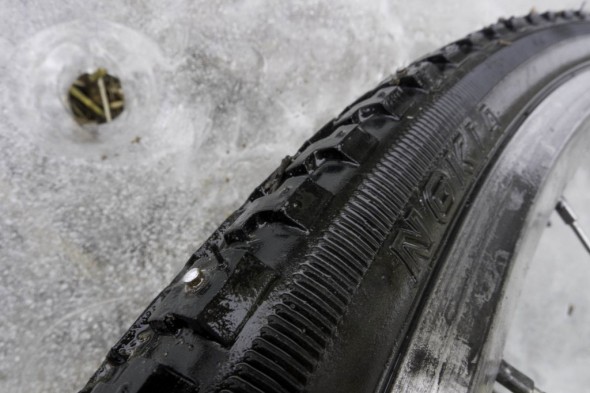 How much longer will I need these studded sneakers?

By the time I left the office at 6pm, all the snowmelt had frozen again, creating what would have been a treacherous commute home without my Nokian A10 studded tires. Nick Ginster (from Fyxation on the first floor of our Pedal Milwaukee Building) was leaving at the same time as me, and he told me he just ordered a pair of studded tires like mine for his Quiver Road commuter bike (very sweet btw). 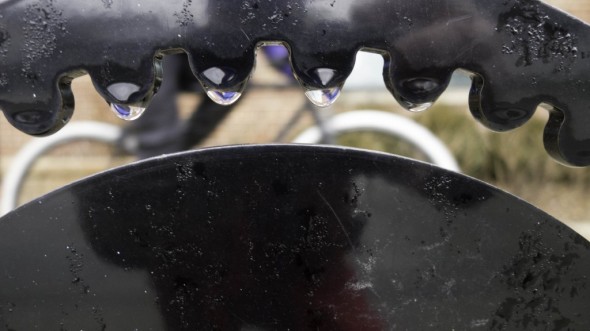 Nick Ginster rides by one of the Saris bike racks outside our Milwaukee office.

Today, although it was raining a bit in the morning, it was much warmer. I took the opportunity to stop a bunch of times on my way to work to photograph the thaw along the Hank Aaron State Trail and the Menomonee River. As mini icebergs floated past me down the burgeoning Menomonee River, I wondered if  Nick had just jinxed himself by ordering studded tires late in the winter season. Will we see enough icy commutes yet this winter to make his purchase worthwhile? 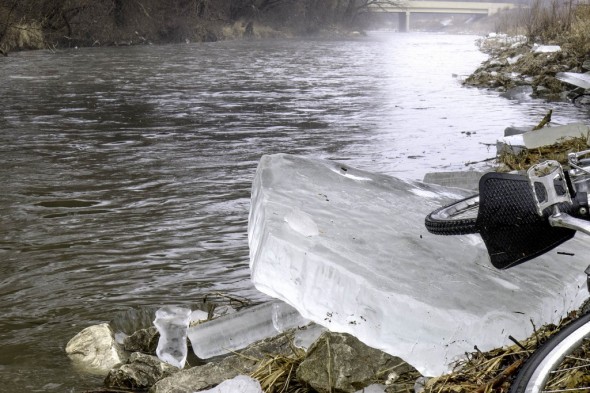 Ice cubes for a giant cocktail? 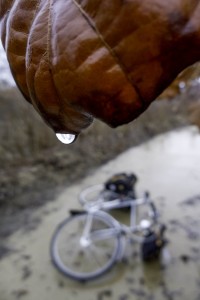 Unseasonably warm rain washed all snow (and road salt) into the river.

When I got to the office around 8:30 a.m., Nick sped past me while I was taking the photo of the water drops clinging to the cut-outs of the Bike Fed logo on our branded Saris bike racks. When I got inside, there were only two hooks open on the indoor parking rack at our office. The weather was rainy, but it is supposed to get up to 57 degrees today. That made me wonder how much weather conditions affect people’s choices to bike to work.

I haven’t had the option of driving to work for about 15 years, so I just have the mindset that I ride no matter what the weather is. Snowing? I ride. Wind gusts of  70 mph? Fight the headwind, enjoy the tailwind. Freezing rain? That’s why the Finns invented studded bicycle tires!

I’ll admit it, I am a bit more single-minded that most people who ride bikes for transportation. Even so, I wonder if we can shift the paradigm so more people see biking in all weather conditions as an option. It is harder to drive in bad weather, but unless there is a blizzard, people never consider not driving. I guess we still have work to do to make more people understand that with a little thought and clothing that fits the conditions, a bike ride to work in the winter need not turn into a Shackleton Expedition. 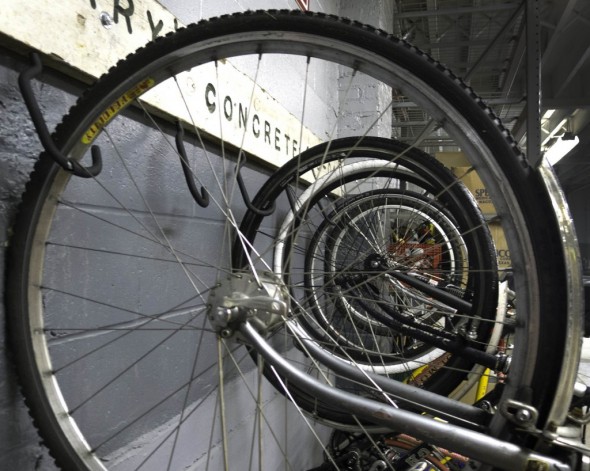 Only one parking space available at the office this day, and our fearless leader Kevin gets a pass because he has a broken collar bone.

While the weather is rarely as severe in Copenhagen as it is in Wisconsin, they do have cold and snow. Certainly more people there take transit when the weather is challenging, but they still make biking in snow and cold look pretty easy. It also helps that they prioritize clearing the snow and ice from the cycletracks. People there always know that their route will be plowed. The video below shows how cycling done no matter the weather and can be done in regular clothes. Regular readers will recognize it as from one of my favorite blogs, Copenhagen Cycle Chic.

One thought on “Bike Czar: Feast or Famine”