An activist with a Ph.D, the Citizen Action leader is working to change history. 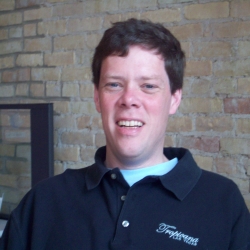 Robert Kraig is frequently in the public eye. The Executive Director of Citizen Action of Wisconsin says he’s early to bed and early to rise. This gives him plenty of time to blast his views on the airwaves of Wisconsin Public Radio, Fox 6 News, The Mic 92.1 FM (Madison), FightingBob Radio, Wisconsin Radio Network, and Milwaukee Public Television — and that’s only during two weeks in February. He doesn’t lack for press coverage: He sent us five plus pages of clips from media outlets ranging from the Milwaukee Journal Sentinel to the Wisconsin State Farmer to WisconsinEye.

His group can be counted on to rally public support for a laundry list of liberal causes: more progressive taxation, for money for public transportation, criticizing the federal sequester and efforts to downsize the county board, supporting high speed rail, same day registration and the recall of Gov. Scott Walker.

Those union labels that seem to be fading away aren’t doing so at Kraig’s shop, located at Suite 300, 221 S. 2nd St. “Citizen Action of Wisconsin is Proud to be a Union Employer, OPEIU Local 9, AFL-CIO,” its literature trumpets, and Citizen Action has rallied for workers at Woodman’s, charging the store with unfair labor practices.

But the group’s signature issue has been the fight for more universal and affordable health care. The most recent federal tax return for Citizen Action shows it with a budget of $1.6 million and Kraig with a salary of $74,284.  He has served since 2009 as executive director and for three years before that as the group’s program director. Born in 1963, this is his Big 50 year, but that’s belied by the image of a fresh-faced chap on the Citizen Action website. Activism must keep you young.

So how did a chap with a B.A. from the University of Pittsburgh, and an M.A. from the University of Georgia, rise to play a role in the Wisconsin public policy arena? Philadelphia was his birthplace, and that’s where his dad got his Ph.D. in History at the University of Pennsylvania. Yet Robert’s brother Ted lives in Milwaukee and is a Uniserv Director (Senior Union Rep.) for WEAC, the state teachers union. Another brother, Michael, is a social studies teacher in a Chicago central city school.

Robert grew up primarily in Oak Park, Illinois where many of the Frank Lloyd Wright houses reign, but moved to Wisconsin to get his Ph.D., and has lived most of his adult life here. He’s a pedigreed-kind-of-chap, with an uncle who was a Dean at UW-Madison’s Graduate School. His mother’s English family dates back to the early colonial period (she was an Adams), and her father (Kraig’s grandfather) was the prominent Harvard Theologian, James Luther Adams, who promoted social activism and democratic engagement in his theology. “Grandfather also fought against Nazism and for civil rights,” Kraig notes proudly.

His father’s family is Russian.  In order to become more Americanized they shortened their name to Kraig. “They were also very progressive and activist in orientation. My father was a long time history professor (he’s now emeritus) at Chicago’s Roosevelt University.”

All of this advanced education doesn’t mean the Kraig family lacks for a sense of fun. Indeed, Robert says his father “made himself into a nationally known food expert, by writing a couple of books on the history of the hot dog, and hosting a PBS documentary on food and culture.” He comes to Milwaukee from time to time to meet with food experts here.

In 2004 Robert wrote “Woodrow Wilson and the Lost World of the Oratorical Statesman” (Texas A&M University Press). Rooted in his dissertation (which he finished in 1999), he says it’s considered “a significant academic book by people who study presidential rhetoric.” He selected this quote from Wilson, to give you a taste of that rhetoric: 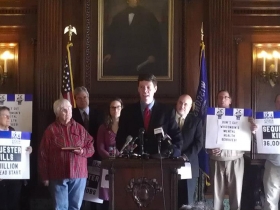 “I wish there was some great orator who would go about and make men drunk with this spirit of self sacrifice. I wish there were some man whose tongue might every day carry abroad the gold accents of that creative age in which we were born a nation; accents which would ring like tones of reassurance around the whole circle of the globe.”

We asked Kraig about the 1886 Bay View Rolling Mill labor dispute, because he lives directly across the street from the memorial, and usually attends the annual commemoration. “It’s very important to reflect what life was like in that time, and how many people fought and died to create greater opportunity than had ever been imagined before,” he says. He views the Bay View attack on working people as “very relevant” to modern controversies, even if today’s don’t involve actually gunning people down at the plant gate.

With all his impressive academic credentials, why didn’t he opt for academia or perhaps a cushy corporate job? After locking himself in a cubicle at the Wisconsin State Historical Society for 5 years to finish his dissertation, Kraig says he couldn’t “bring himself to jump on the professorial tenure track treadmill. I figured I would work directly for social change for awhile….that was 14 years ago. I have not turned back.”

The conversation drifts to health care, the current heart of which, Kraig says, “is a moral crisis more than a policy crisis. If we get the values right, the policies will follow.” Have we lost our way? Kraig thinks what we’ve lost, in the headlong rush for the almighty dollar, is a sense of citizenship and responsibility to each other.

“For a brief time in American history, maybe 1948-1975 or so, there was actually an expectation that CEOs should not make more than 4-5x more than their average workers. This expectation led to restraint, balance, and proportionality. By the 1980s there was a backlash against this culture of responsibility and mutual concern.”

As a result, he says, “access to opportunity and freedom has suffered.” That’s the tide he seeks to reverse, in an attempt, as Wilson might put it, to make our citizens and leaders drunk with the spirit of self-sacrifice.