The UWM architect and city insider paid full price for his splendid home on the East Side's gold coast. 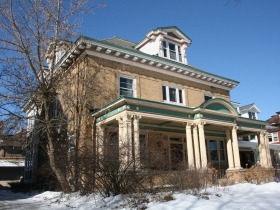 One fine day in June, 1997, a professorial couple in town went to a viewing of a splendid East Side home and were so enamored that they quickly made an offer, an offer so generous that a city assessment official was sent to investigate the situation. “Sale appears valid,” the employee noted. “Buyers live in the neighborhood, viewed during an open house. Was not really looking, but liked this home, didn’t really look at any other homes.”

This note, dated June 10, 1997, from the files of the city assessor, is a memo of a conversation with the new owners of the home, to verify that the sale price was legit. It was; therefore the building on N. Shepard Avenue was entered on the tax rolls at the sale price of $325,000, and this love letter to a home became a public record.

Greenstreet is a professor of architecture and dean of the School of Architecture and Urban Planning at the University of Wisconsin-Milwaukee, so you can figure he brings a certain professional discernment to his choice of a residence, along with an apparently well-stuffed pocketbook. You could work a full-time job at minimum wage and still not make enough to pay the $17,677.99 property tax. But that’s no problem with our Bob, who has paid his debt in full.

What sets this home apart enough to inspire an architect and his wife to purchase it on a whim? It is a study in symmetry. Maybe it was the third floor ballroom that sold the couple on the 11-room mansion, or perhaps its two fireplaces. Maybe that 22 foot by 26 foot garage, built in 1929, sealed the deal. Or, it could have been the 1986 kitchen remodeling that gave the home its first dishwasher and garbage disposal. Whatever, the Greenstreets installed a $10,000 central air conditioning system when they moved into this near-lakefront home where June temperatures can call to mind those of Greenstreet’s native London in March.

There was a time, though, before architects started pricing up the district, when Milwaukee’s fabulous gold coast homes were valued as the cumbersome elephants they often can be. In 1938, the place was assessed at $17,800. A quarter century later, it was worth only $17,050.

In 1954, a Heil oil burning furnace was installed to replace the original, and 40 years later a 1,000 gallon tank was excavated from the yard, once the home had been converted to gas. Perhaps the biggest excitement in the home came a week before Christmas in 1977, when a faulty extension cord, connected to a television in the living room, set fire to the carpet. “The fire spread to a mantle over an artificial fireplace. An oil painting was charred, and an artificial Christmas tree was partially burned,” according to a newspaper account.

Can you imagine! A television in the living room? An artificial fireplace? An artificial Christmas tree? It’s a wonder the property held any value whatsoever.

How Milwaukee Is It? The home is 3.1 miles from City Hall, where Greenstreet served as the chair of the City Plan Commission from 1993 – 2004, and then continued his service as the lead planner for the City of Milwaukee. There is no Green Street in Milwaukee, but there is one in London, if he ever cares to move back. 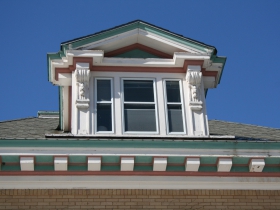 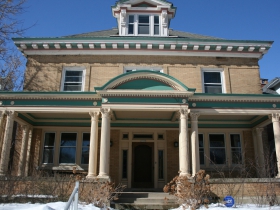 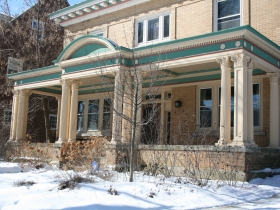 After an oxymoronic start teaching urban planning in Kansas, Greenstreet joined the UWM faculty in 1981. According to his 44-page curriculum vitae, Greenstreet specializes in the legal aspects of construction, as evidenced in the book he wrote with his wife, “Architect’s Guide to Law and Practice,” available on-line at prices ranging from 99 cents to a whopping $128.95.

Greenstreet is a Fellow of the Royal Society of Arts, but then so was Karl Marx. (Ben Franklin, too!) Membership costs him, and his 27,000 fellow fellows, $245 a year at current exchange rates.

He received architecture license 045098G in 1978 from the Architects Registration Board of the United Kingdom, where he is in good standing among his peers.

Greenstreet served as the Interim Chancellor at UWM from 2003-2004, which is considered by some to be the institution’s Golden Era. Greenstreet’s watercolors have been displayed in Kansas and Milwaukee.