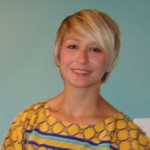 Art isn’t good at proposing solutions, but it is good at addressing problems. Weightless Words, including the work of Annushka Peck, Calvin Whitehurst and Ted Brusubardis, is in the words of the show’s curator John Loscuito, exposing the “less than admirable side of ourselves”. This visually minimal exhibition is perceptually stimulating, incorporating sound, installation, collage and video.

Peck’s videos flash culturally sensitive, contrasting words at a dizzying rate: “patriot”/”traitor”, “pedophile”/”cougar,” “teabag/libtard.” Her rows of t-shirts and posters incorporate similar rival words printed vertically, parallel to each other, on the verge of merging with the opposing word. Her work is very literal in its presentation, made more so by the fact that everything is printed in either black or white.

The overplayed idea is that these words’ meanings aren’t as black and white as they seem. She exaggerates the convention that discriminatory language is not open to interpretation and change, making it difficult not to question how the words are used in our society and what dialogue between the opposing forces might bring.

The Call incorporates a sequence of emergency calls, some made on 9/11, some made during the more recent Sikh temple shooting. The viewer walks into an enclosed space and is faced with speakers hung in a raw display from the ceiling, churning a cacophony of sound into the gallery space. If you focus, you can pick out individual voices and tones: the terrified distress of the callers, witnessing the attacks, or the chilling, detached calmness of a 911 operator.

National tragedies have a way of sticking in the mind, 9/11 in particular. So many of us have a distinct recollection of where we were and what we were doing when we heard about it or saw it that it’s become a collective memory. We hear individual personal distress and we think: community. After these events, local and national communities came together in honor of the deceased and to protest against violence, racism and ignorance. This piece is a reminder of the power of a united collective, an effective tool that prompts the viewer to consider acting to improve social welfare.