Tom Hundt has been cutting hair since 1966, including 90 percent of the city’s military recruits. 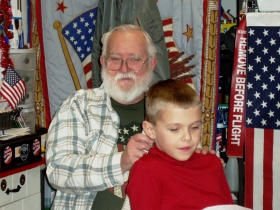 Tom Hundt uses a vacuum to clean up Spencer Maas after his haircut. Photo by Peggy Schulz.

Tom Hundt has been a barber his entire working life.  Actually, he’s been connected to the business since age two, when he got his first professional haircut back in the late 1940s. By the time he finished Rufus King High School, Hundt knew he wanted to be a barber, and he left immediately (on the Friday night he graduated) on a bus to Denver where he started barber school the following Monday.  The barber who cut his two-year-old hair was the shop’s owner, Mel Kazda. Another barber there was Bill Pierce, who had worked for Kazda since 1960, and who had encouraged Hundt to attend barber college and recommended the school in Denver.  At the time, the waiting list for any barber school in Milwaukee was three years, Hundt recalls.

So after completing his studies in Denver, Hundt returned home in January 1966 and began working for Kazda.  Kazda died within a year, and Pierce bought the shop from Kazda’s widow and renamed it Bill the Barber, and Hundt worked for him for more than three decades.  When Pierce retired in 1999 and moved to Arkansas, Hundt bought the shop from him and moved it from its Fond du Lac Avenue location to West Capitol Drive.  It’s been Tom’s Barber Shop ever since, moving about five years ago to its current location at 7828 W. Burleigh and continuing a business started by Kazda more than 60 years ago.

The customers are just as loyal. Many go back more than one generation, and at least one family of satisfied customers is in its fifth generation.  Of course, the price is right, at $7 for adults (up from $5 in 1999), and $6 for seniors age 65 and over, with free haircuts offered to those age 100 and above.  Eight times Hundt has had to pay up on the free-cut offer, and the oldest customer was 108 years young.

Hundt is an excellent barber, to be sure, but it’s his dry sense of humor, his undying respect for military veterans and his love of his job that are the real drawing cards for customers – and a key reason he keeps working, well into his 60s.  “Why should I retire?  I get to BS all day and get paid for it,” Hundt says, adding that he’ll retire “when I quit having fun.”  Hundt is a comedian of sorts, a story-teller, a Civil War historian, a collector of memorabilia, a fund-raiser for a variety of causes and a husband and father.  And, after he grows a full beard starting each year in September, he plays a very convincing Santa at a number of schools near his home in Hustisford.  Doug, a customer who says he only needs a cut about twice a year (“I don’t have much hair”), credits the friendly atmosphere and the price for his loyalty, although his chats with Hundt on details of the Civil War likely factor in, too. 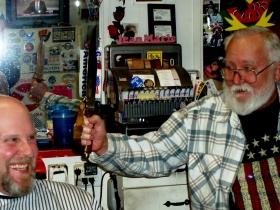 Brian Maas gets a taste of Tom Hundt’s sense of humor after asking about his shaving “blade.” Photo by Peggy Schulz.

It wasn’t until Hundt bought out the shop in 1999 that he hired two female stylists. Pierce wouldn’t hire women, Hundt says, adding he himself is smart enough to only cut men.  “I get along a lot better with women if I don’t touch their hair” he says.  Confirmation comes from Jean Marie, one of the first stylists Hundt hired, who wryly recalls his attempt to cut a woman’s hair.  “The bangs were at an angle,” she says, drawing a hand across her forehead a good 45 degrees off plumb.

She likes working for Hundt. “Tom is easy-going,” she says.  “Trust me.  I’ve worked for some jerks!”

“This is an old-fashioned barbershop,” Hundt says, describing the small, three-chair space.  No appointments, all customers “drop-in.”  The walls are more than covered with aposters, artwork, bumper stickers and military memorabilia.  “Customers have brought in all of it,” Hundt says.  It all started when two Army recruiters came in with a large, circular rug of the Army emblem and asked if they could hang it on a wall. Later that day, when “Captain Jim,” a Marine, came in and saw the Army logo, Hundt says, “It was easy to cut his hair – it was standing straight up.”  In less than an hour, Jim came back with a similarly-sized Marine rug that Hundt hung right next to the Army one.  Soon, a Navy rug followed, and then an Air Force logo.  Excess military items sit in stacks wherever they’ll fit, or hang from the ceiling, like the flight suit behind Hundt’s chair.

Hundt has been doing military recruit haircuts for nearly his entire career, and estimates he cuts about 90 percent of all recruits in the metro area.  “They just keep enlisting,” Hundt says.  “They’re no jobs out there.”

His shop could double as a recruiting office for every branch, with its countless posters, medallions and framed photos.  Among the most prized items is a Certificate of Commendation from the commandant of the Marine Corps, thanking Hundt for his work with recruits. Then there’s the gum ball machine that still costs just 1¢ (with Hundt usually providing the pennies), a small exercise cycle, a refrigerator holding cold beverages, and stacks of photo albums, newspapers and magazines covering every available inch of floor and counter space. 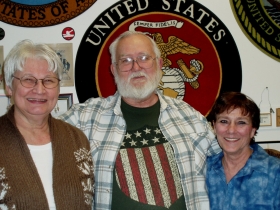 Nita and Tom Hundt and Jean Marie stand in front of some of the military emblems on the west well of the shop. Photo by Peggy Schulz.

The barbering Hundt does in this mini museum isn’t much different than 47 years ago, although he doesn’t do shaves any longer.  And his bad knees put him on a stool with wheels about four years ago. As he puts it, “I got old, I got married (to Nita), I have three children and five grandchildren.”

After enough customers came in to Hundt’s shop asking, “Can you fix this?” he had a sign made up – his favorite “artwork” – that proclaims, “We fix $20 haircuts.”  Hundt also is good at fixing a customer’s sour mood, a scissors-shy child badly needing a trim, an amateur historian with a mistaken take on a Civil War battle and, in all seriousness, a lack of support for veterans.  Whether it’s a fundraiser for the Honor Flights, gathering non-perishable food items for troops and their families, or a simple collection of pop tops from aluminum cans, for which Miller Coors donates 10 cents each for veterans’ organizations, Hundt is committed to the cause.  But his first duty, you might say, is to have fun.

2 thoughts on “Working: Tom the Barber”