Commission recommends zoning change for brick warehouse to be converted to 65 apartments.

An underused building just north of downtown was recommended for a zoning change by the City Plan Commission. The commission made the change at the request of Impact Seven, Inc., the company that wants to convert the building at 1300 N. 4th Street into 65 apartments.

The project is proposed to be funded with a mix of low-income housing and historic preservation tax credits. Because Wisconsin Housing and Economic Development Authority (WHEDA) scores the low-income housing tax credit applications using a points-based formula, Impact Seven is seeking the zoning change in advance of having financing for the project. Having zoning in place for a proposed project is worth 15 points (out of a potential 445). 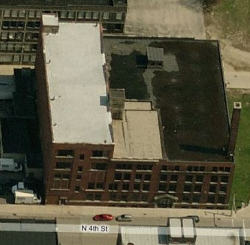 Because a portion of the building (which is actually three buildings, but the city treats it as one building) is five stories, a rooftop patio is planned with access from an elevator bank and two stairwells. Parking would be provided on the first floor of the building, and on a 42-stall surface lot immediately to the north.

The building’s square shape makes it more challenging to convert to a residential use. Rectangular buildings are generally preferred as they maximize the amount of floor space that is near a window. To overcome this challenge, Impact Seven is proposing to place a number of their common elements in the center of the building, including a fitness facility, business center, meeting rooms, and on-site management office.

To obtain the federal historic preservation tax credits, Impact Seven is nominating the building to be placed on the National Register of Historic Places.

According to city records, the building was completed in 1907 (presumably the newest of the three buildings dates to that year) and contains a combined 99,875 square feet of space. In 2012, it was assessed at $1,284,000. It is presently occupied by C. Coakley Relocation Systems and owned by Roadster, LLC, of which Christopher Coakley, relocation company owner, is a member.

The City of Milwaukee’s 2010 Downtown Plan specifically recommends an adaptive reuse for this building in the section on introducing new uses into the Haymarket Square neighborhood.

This project was previously mentioned in late November in Eyes on Milwaukee: The Dead Zones.