Image makeovers through the ages

St. Nicholas, the model for Santa Claus, was real. Artists -- mostly American -- dreamed up the Santa we know today.

“He was chubby and plump, a right jolly old elf”

Right, we all know who that is – how could it not be? The image of Santa Claus is so well-established today that indeed, if a guy in a red suit with cheeks like roses, a nose like a cherry, and chomping on a smoky pipe miraculously dropped down your chimney, cookies and nog would definitely be in order.

Our cheery modern-day St. Nick is a relative newcomer, and an American one at that. The origins of this Yuletide figure started with the kind actions of a man called Nikolaos, a pious Christian who lived in the city of Patara in modern-day Turkey. He became aware that a neighbor faced a dilemma. The neighbor was a gentleman with three daughters but no money, thus lacked the dowries needed in order to marry them off. Thus, girls faced bleak prospects: prostitution or enslavement in another form.

Nicholas, as we spell it in the West, was well-off. He threw a bag of gold through his neighbor’s window so that a dowry for the eldest daughter would be possible. He did this in secret, and then repeated it twice more. On the third time, he was discovered and the story of his generosity became legendary. He went on to be named the bishop of Myra and was responsible for a number of other miracles. His actions lived on in The Golden Legend, a 13th-century compendium of stories about saints’ lives. St. Nicholas’s deeds persisted through the written word and were also immortalized by Italian Renaissance artists such as Amborgio Lorenzetti and Gentile da Fabriano.

St. Nicholas became a popular cult figure throughout Europe, and in nineteenth-century America, gained notoriety especially as a New Yorker. Washington Irving’s Diedrich Knickerbocker’s History of New York included descriptive passages about him, appropriate as he was the patron saint of New York. First published in 1809, a new version of Irving’s book came out in 1821 with even more elaboration on his habits and magic, including the flying wagon he used to deliver presents to tiny tots.

In 1822, Dr. Clement Clarke Moore, who counted poetry among his many talents, was struck with the inspiration for the poem “A Visit from Santa Claus,” or more colloquially known as “‘Twas the Night Before Christmas.” (Moore’s left us with other lasting contributions to American culture, particularly the Chelsea neighborhood of Manhattan, eponymously named for Moor’s 94-acre farm that used to occupy the area).

Moore considered himself a rather serious poet, and the charming verses describing the miraculous visit of the “right jolly old elf” only became well-known after a family friend obtained a copy and sent it to a newspaper in upstate New York for publication. For over 20 years, Moore seemed a bit embarrassed to claim ownership, and it wasn’t until 1844 that the poem was published under his own name. However, Moore’s authorship is not unchallenged, as it has been claimed that the real author was Henry Livingston, Jr., of Poughkeepsie, New York.

In the mid-19th century, the imagination of the celebrated American illustrator Thomas Nast helped bring a vision of Santa to life in Harper’s Weekly. Nast built on European inspirations of Santa, but was not adverse to incorporating specifically American references, as seen in the star-spangled clothing of St. Nick in an 1863 illustration showing his visit to troops in the midst of the Civil War.

Throughout the 19th century, Santa’s appearance remained instantly recognizable but quite able to absorb change and technology. In 1897 Kris Kringle eschewed the reindeer for a bicycle, and in 1906 he snapped pictures while making his yearly rounds.

Santa also became a pitchman, perhaps most famously appearing in Christmas ads for Coca-Cola. This yearly campaign began in the 1920s, but achieved iconic status through illustrations by Haddon Sundblom, the creator of Santa images from 1931 to 1964. Coke certainly wasn’t the last to use Santa as pitchman. More recently, Santa’s gone hipster, rocking out to his own private iPod Christmas soundtrack.

Santa is a pliable icon, a figure who’s literally been around for ages but keeps up with the times. Yes, maybe his image has gotten a little tarnished though rampant commercialism, pitching everything in the name of consumer culture Christmas. But that is a far more recent veneer, a reflection of the world we live in. As both historical figure and myth, he can still represent a spirit of kindness and generosity that warms modern hearts. No matter the details, accessories, or placement, the spirit of St. Nick can still permeate his images, ancient and new. 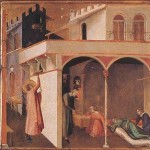 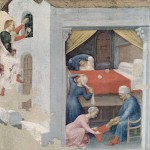 Hipster Santa, rockin’ out with the earbuds in. iPod advertising from mid- to late-2000s. Image courtesy http://www.kittywompus.com/macadamia/tiny_essays/ 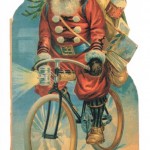 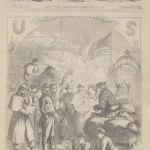 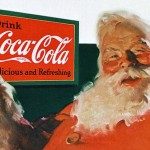 Haddon Sundblom, “My Hat’s Off to the Pause that Refreshes,” 1931. Image courtesy www.coca-colacompany.com 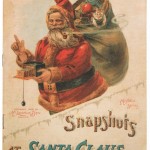 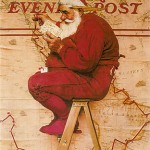 0 thoughts on “Picturing Santa Claus: Image makeovers through the ages”