The developer and “Innovator of the Year” is more about people than buildings. 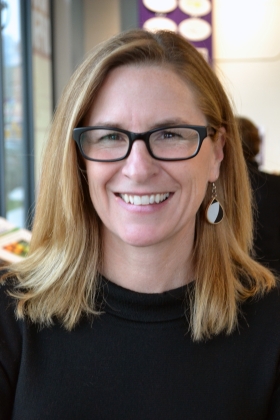 Once Upon a Time, Juli Kaufmann lived in Brewers Hill (where she bought her first house), but she’s also lived on the East Side, behind Vittucci’s, and for the last seven years she’s lived and worked in Historic Walker’s Point. Now that home is up for sale and she’s likely to move again. A real estate developer in a field dominated by guys, Kaufmann marches to her own drum….most recently to the beat of the Clock Shadow Building, brought out of blight and into the light by her company, Fix Development, LLC.

She must have grown up playing with Lincoln Logs, right? “Nope,” the 43-year-old says, adding that “having three brothers may have had some influence, but generally I did everything from ballet to band to basketball.” She was always trying new and different things.

As a kid she attended St. Mary Grade School in Hales Corners, before moving on to Pius XI High School where she participated in athletics as a “Lady Pope,” graduating in 1987. Then it was off to the Ross School of Business at the University of Michigan and graduation in 1991.

“Life has been her classroom,” she says. School always came easy to her, but it was also the place that was the least interesting. In college, she was likely to be outside at an environmental protest, or starting an environmental project, rather than studying statistics. “I have often thought that my business school peers likely went on to Wall Street and were behind the recent financial meltdown,” she says. “The whole business school culture was an awkward fit for me, but I am glad I did it.” At Michigan she organized “Recycle U of M,” which led the way in recycling the heaps of abandoned items left curbside when students moved out of dorms.

Is the pursuit of business in her genes? Her maternal grandparents ran a bar, (called the Ricochette) that she says is still on the near north side. “Grandma was pure German; Grandpa was pure Hungarian,” she says. Things get murkier if you add to the mix her pure Irish paternal grandma and her pure French paternal grandpa. Kaufmann’s father, Patrick LeSage, was a founding partner of the Mooney LeSage real estate company (now known as NAI MLG), and her mother (a housewife who raised four kids), was there to encourage her offspring.

Kaufmann guesses that she “hasn’t fallen far from the tree,” but adds that her approach is different. “Much of my professional life was not directly related to real estate, and still isn’t all it’s about either.” 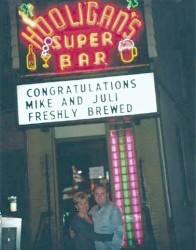 She definitely has a unique style. On December 30, 1999 (“back during a time when it still snowed,” she jokes), she married Mike Kaufmann at Hooligan’s Bar on North Avenue. The guests ate bar food. Mike and Juli’s names were on the Hooligan marquee in front. Did we mention she was married by a Jewish divorce attorney? Her spouse is employed by Milwaukee-based Derco Aerospace.

In 2002, the couple decided to build a “green” house in Walker’s Point. They found their lot, albeit a contaminated one, and set about bringing it into compliance with the Wisconsin Department of Natural Resources. It stands in a block with historic homes.

Kaufmann says the family home has centered their lives near things that are within walking distance, but they also ride the buses and pedal their bikes around town, no matter what the weather. Their 6-year-old son, Frederick Oren Kaufmann, is named after the beer barons (Miller, Pabst) and sausage kings (Usinger) of Milwaukee, and, of course, after the grandpas. He attends Maryland Avenue, a Milwaukee Public School of the Montessori persuasion.

Ever the developer, Kaufmann birthed plans for the Fifth Ward’s 30,000 square-foot Clock Shadow Building, aptly named, given the nearby Allen-Bradley Clock Tower, which casts a big shadow indeed. Naming a new building in a way that echoes a much older one is a smart way to link past with present, a reminder of where we’ve been and where we are. It’s seamless, unlike the development bullies who take over historical properties and then christen them with outlandish tags that have nothing to do with the neighborhood. 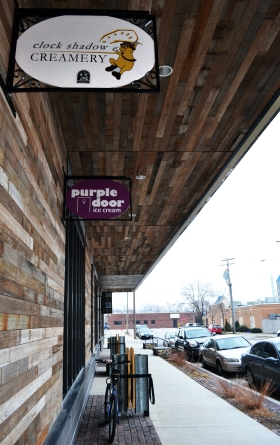 The Clock Shadow Building is 60 percent recycled material, not the least of which is Cream City Brick, the brain-child of Mr. J.L. Burnham, who, in 1844, saw possibilities in the clay soil of the Menomonee River Valley. An early south side pioneer, he purchased 80 acres of land, and in addition to his brick making, became a major real estate developer.

It’s somewhat ironic that the Clock Shadow Building houses a creamery, since the bricks weren’t named after Wisconsin’s dairy industry but gained fame because of their clay-based, creamy golden hue. Seven tenants (backed by twenty investors) have brought the Clock Shadow Building into 100 percent occupancy. An employee of The Purple Door, an ice cream and cheese purveying tenant on the first floor, told us that much of the business is rooted in sales to neighbors.

As a woman playing on a not-very-level field dominated by males, she’s seen enough bias to make her bitter. But she’s not bitter; she’s pragmatic, which by the way, was the name of her former construction company (Pragmatic) that was responsible for twelve million dollars of residential, environmentally-responsible construction in southeast Wisconsin, primarily in the Racine and Kenosha area.

Sure, she’s seen women objectified on construction sites. It’s happened more than a few times to her, especially when she was wearing her hardhat and work boots. People still assume it’s “Men At Work,” but that’s all changed, and Kaufmann is happy to note that Pius XI High School now has an engineering course where all students, girls and boys, can earn college credits.

“Gender certainly is relevant and I feel its impact everyday,” she says. “I am also not shy in my opinions, and that sort of style can turn off some folks. My passions and beliefs tend to overrule my sensibilities at times. I can unequivocally say that women are my biggest allies, my most common partners, and the lead investors in all of my work. Women have been quicker to share my visions and support my ideas.”

She believes that women in general are more comfortable participating in collaborative approaches. Much of her work has less to do directly with construction, and more to do with advancing social entrepreneurship, building better community, and she adds, “developing new models for social investing.” She has a passion for local food systems, local farming and local investing.

2012 was a very good year for Juli Kaufmann. The Wisconsin Commercial Real Estate Women’s organization recognized her as “Woman of the Year in Commercial Real Estate.” But she seems proudest of being named “Innovator of the Year” by the Daily Reporter, the journalism paper for her field. Honoring her as an innovator rather than as a “woman” sends a powerful message, she says.

And she likes to pass on her knowledge by mentoring young women interested in the fields of construction or development. Currently, she’s working with a female intern and a female apprentice, giving them hands-on and real-world experience.

Kaufmann hopes that she’s also a role model for men. 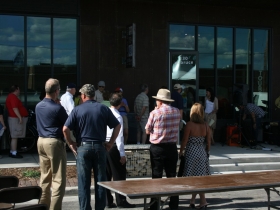 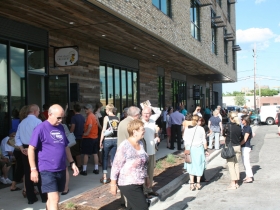 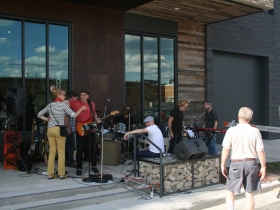 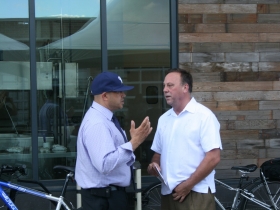 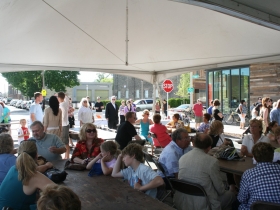 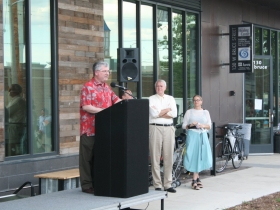