Little free libraries are welcome in Milwaukee -- unlike in Whitefish Bay.

By Gretchen Schuldt, Wisconsin Justice Initiative - Nov 20th, 2012 10:00 am
Get a daily rundown of the top stories on Urban Milwaukee 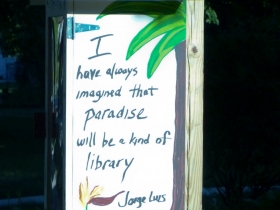 Score another reason to live in the city: little free libraries are welcome.

Essentially banned in Whitefish Bay (they are legal in back yards, but not in front yards), little free libraries remain unfettered purveyors of literacy and community in Milwaukee.

And that isn’t going to change soon.

“At this point in time, the mayor has no interest in regulating or prohibiting,” Patrick Curley, Mayor Tom Barrett’s chief of staff, assures us via email.

“I would probably hold the very same viewpoint,” says Ald. Jim Bohl, chairman of the Common Council’s Zoning, Neighborhoods & Development Committee. Bohl would not favor regulating little free libraries unless they became a “problem in some way, shape or form.” And the alderman has heard no such rumblings.

Little free libraries are weatherproofed boxes that provide a place for neighbors or passersby to exchange books. The official little free library mission, according to littlefreelibrary.org is to:

Bohl says both he and the Department of Public Works both support a neighborhood group’s proposal to put a little free library in Hartung Park near N. Menomonee Parkway and W. Keefe Ave. The park is in Bohl’s district.

Curley notes there are a number of little free libraries in Washington Heights, “the neighborhood Mayor Barrett and the City Librarian Paula Kiely call home.”

Little free libraries “have not shown up in our complaints” and have not presented problems, says Todd Weiler, spokesman for the Department of Neighborhood Services. If a little free library does become problematic, DNS has tools to deal with it, he adds.

“The key to making the little libraries a success is having someone personally responsible for maintaining each one,” Kiely explains. “That’s why having them on personal property is actually preferred.”