Still German After All These Years

Von Trier is an East Side establishment known for its authentic German atmosphere and draft beers. 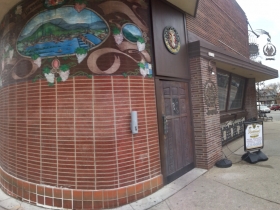 Those who enter the modest brick building on the southwest corner of North and Farwell Avenues are greeted by a cheerful German-style mural spanning the wall above a spacious bar filled with beers from across the globe. In the heart of the East Side, businesses spring up and sell out in the blink of an eye, but the building occupied by the famous Von Trier cocktail lounge has served drinks to thirsty patrons for nearly a century.

Today, patrons help themselves to the tavern’s signature free popcorn while they browse Von Trier’s expansive selection of European beers, wines and mixed drinks. Von Trier’s general manager, Chad Prochnow, says that free popcorn is far from the only thing that has remained unchanged throughout the decades. Von Trier came into existence after Karl Lotharius bought the establishment in 1978. Lotharius was from the town of Trier, Germany and renamed the bar Karl von Trier, German for Karl from Trier. Before Lotharius came into possession of the building it had been home to an East Side institution called Reider’s since the 1930s.

Currently owned by John and Cindy Sidhoff, who also own Hooligan’s, a bar on the same intersection, the building has changed hands numerous times since the 1930’s but has always been a lounge respected for its fine drinks. Upon acquiring Von Trier, the Sidhoffs were determined to keep the tavern’s age-old charm. The couple fixed up the authentic German interior, added a kitchen and expanded the bars draft selection from 12 lines to over 30. The bar now rotates beer from around the world and has a bottled beer selection of over 100.

Back in the 1970s, the city was full of German restaurants, but there were no authentic German lounges. Karl Lotharius decided to combine his German heritage with Milwaukee’s love of beer. Prochnow attributes the tavern’s success to the fact that, at that time, most bars in the area were serving local and domestic beers; Von Trier presented an entire line of imported beers. In fact, it was the first establishment in the United States  to serve Hacker-Pschorr Weisse on draft.

North Avenue can draw its fair share of college students looking for a wild night, but amidst it all Von Trier remains a peaceful destination for people of all ages looking for a beer or cocktail they may not be able to find elsewhere. “You could have a 21-year-old sitting next to a 71-year-old at any time.” says Prochnow “The biggest draw I think we have are the 31 draft lines we have, we rotate a lot of beers out, we try to keep it unique and new.”

On weekday afternoons, the bar is spotted with older patrons grabbing a relaxing drink, and as the daylight fades into night the younger crowd trickles in. While he frequents the other bars and pubs on North Avenue, 22-year-old musician Nicholas Schubert is drawn to Von Trier for the same reasons as its guests earlier in the day.

“I love Von Trier because of the great selection of beers,” says Schubert, “I love the warm and welcoming atmosphere, and of course the free popcorn!”

The look and feel of the venerable tavern is also unique. Stepping down the stairs and into Von Trier’s private back room, it’s easy to forget that, on the other side of the building’s authentic German stained glass window, county buses spray exhaust into the air.  Here, the racks of Moose and Deer line the walls. From the ceiling hangs a relic from the old Pabst Mansion, huge antlers and light fixtures bound together into a magnificent chandelier.

The chandelier, made by the famed artist Cyril Colnik,  has hung in the grand room since the late seventies when Lotharius purchased it from an antique dealer. Over 30 years after the tragic death of Karl Lotharius, whose unsolved murder was said to be at the hands of someone he knew, says Prochnow, the masterpiece is still suspended in the center of the room. And in the early evening the warm light cast by the chandelier blends together with the sunset illuminated through the window’s colored glass, cloaking the room in a soft yellow glow.

Earlier this spring the tavern introduced small plate food, allowing guests to munch on European-American cuisine as they try out the nearly limitless drink options. Schubert and other guests his age are living, aging proof that Von Trier has staying power. Its diverse clientele is due to its ability to cater to the needs of just about any type of guest; the reasons people stop in for are almost varied as the customers themselves.

Moviegoers headed to the Oriental Theatre next door often come by for a drink before the show, the relaxed atmosphere is ideal to take a date out for their first Moscow Mule and the extensive beer list draws in customers who are looking for a taste of the Old World.

To further capture the bar’s unique atmosphere, we offer this audio narrative of Von Trier:

2 thoughts on “Taverns: Still German After All These Years”