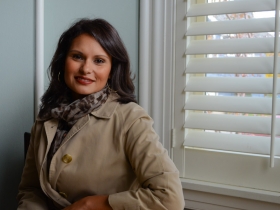 Raquel Madrid was just 18 when she married and moved with her husband from urban Chicago to Waukesha. It was a culture shock. She cried a lot, she admits.

It was 1993 and her husband, Kevin Berkel worked for Marriott Food Services and had been transferred to Carroll College in the heart of Waukesha. So Raquel Berkel figured she would attend college there. But it wasn’t easy.

“I think I was the only woman of color — ok, maybe there were three,” she recalls. “It was a big culture shock and I did not feel supported by the faculty or staff, and being married and living off-campus didn’t help,” she says. She missed her inner-city Chicago family and friends.

A year or so passed. She left Carroll to work at Boston Store and do some modeling, when — Bingo! — a baby was coming and Raquel was only 20-years-old. They named their bundle Cassandra. Later on came a son, Nick.

More tough decisions came along. Raquel divorced, then later married Steve Filmanowicz, a longtime aide to John Norquist who now is editorial director for Marquette University.  “Folks are curious as to why I would drop a name like Madrid, to take the name of Filmanowicz,” she says. “My Mexican family has never really been able to pronounce it, much less spell it. The best part of receiving cards from my mom, is seeing how she spells Steve (usually as ‘Estebe’), or Filmanowicz (‘Philmanowiz’).”

No, she wasn’t named after the 60’s movie star Raquel Welch. Her mom didn’t have a name picked out for her, but when a Filipino nurse came in the room and said that the baby looked like a ”Raquel,” that was that.

In the years after she first became a mother, Raquel worked hard to build a career. She returned to school at Cardinal Stritch where she obtained an undergraduate degree in business administration while working at Rockwell Automation in their community affairs office. The skills she learned gave her a foundation for her later work with the City of Milwaukee Health Department. There, she spent six years as the communication manager and then was promoted to Health Operations Administrator, where she served for four years. Her staff was large (257), and together they addressed teen pregnancy, infant mortality, and obesity.

“It’s the H1N1 vaccination response (for Influenza A virus) that remains most vivid in my mind,” she says. “Going from developing strategies and preparing for severe health crises is one thing, but to implement those strategies in times of need…it was definitely one of the most community-wide health issues that we dealt with.”

In her spare time, she planned the twenty-one million dollar budget for the health department.  “Working with Mayor Barrett and United Way of Greater Milwaukee, we established a goal of reducing teen pregnancy by 46% by the year 2015.” The health department recently announced the fifth straight year of a decline in Milwaukee’s teen birth: it has dropped by 36 percent since 2006.

In a 2010 article in the Business Journal, she set an example for her staff and community when she spoke publicly about her fitness and health goals, and about growing up in inner-city Chicago. “I didn’t grow up in the best neighborhood, so my mom was always afraid to let me play outside, and there wasn’t always extra money for me to join organized sports of leagues,” she recalled. “Factor that in with an unbalanced diet, and you have the classic recipe for being at risk for pediatric obesity. I wasn’t obese, but certainly I was overweight for my age.”

This year, Filmanowicz left her job with the health department and took on a position as Vice-President of Community Affairs with BMO Harris Bank (formerly M&I, which as purchased by BMO) but she says the job continues her interest in community issues. Working at the bank’s Water Street building, she’s responsible for overseeing strategic sponsorships and programmatic grants for local area nonprofits. It’s notable that BMO Harris has made a multi-year pledge to combat Milwaukee’s infant mortality. 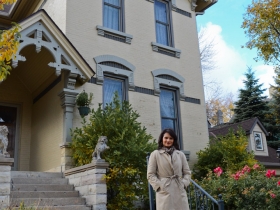 Perhaps some day you’ll see her walking in the Astor Street area where she and her family of five live. She and Steve have a six-year-old daughter, Lily, while Cassandra is now 17 and Nick is eleven. They all attend different schools but worship together at St. Paul’s Episcopal Church on Marshall Street. “On a day to day basis, our world here in Milwaukee is about a two mile radius from our home,” she says. “It doesn’t get any better than a seven minute commute, which includes picking up a kid from school.”

You would expect someone who worked for the health department to keep her own family healthy. Her children are active in diverse sports. Raquel cooks healthy meals at home, but she notes that this is a tougher challenges for families in poorer neighborhoods with higher rates of unemployment, teen pregnancy and infant mortality. “In these zip codes, you’re more likely to see corner stores selling chips and soda, and if they do sell fresh food, it’s two to three times higher priced than at bigger chain grocery stores,” she says. She echoes a phrase she once heard: “It’s expensive to be poor.”

In 2010, Raquel Filmanowicz made the list of the Business Journal’s “40 Under 40,” honoring younger leaders in town. She’s made quite a transition from her weepy days in Waukesha. And she hasn’t slowed down yet. In the summer, she trains for a half marathon, but most times of the year you may spot her doing a 5 mile run, or a quick 20 minute walk down to the lake and back home.

Additional reporting for this story was done by Molly Kessler.