A Third Ward studio sweats the details to create and mix unique tunes and sound effects. 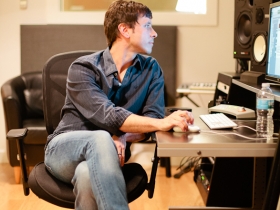 When Alex Smolinski and his wife Kim Henry moved to Milwaukee, they decided to live downtown. They found it pretty lonely. One night there was a bad snowstorm and the couple took a walk near the river. “We were walking by the Chase building,” Alex recalls, “and nobody was around. We looked down and there was a shopping cart, half frozen in the river. We said this is just so weird.”

The couple recently purchased a home in Bay View and are much happier. “We looked at Tosa, which I like, and I like the North Shore, but Bay View just felt better to us,” Alex says. They are both New York State natives and Bay View reminds them of Brooklyn.

Smolinksi is the genius behind Wonder Wonder Sound, a relatively new audio production and mixing studio in the Third Ward. He works with a handful of large creative agencies in Milwaukee whose clients may need music or sounds for a commercial. He’ll either write songs or draw from the music in the vast library he’s created, often creating sounds in his studio (for an ad for Marquette basketball, he created the sounds of tennis shoes squeaking and basketballs bouncing, all done in his studio). He’s also worked with composers that have written a piece for a commercial and he’ll mix it, cutting, adding chords, rearranging — whatever’s needed to make the ad as punchy as possible. Kim works as a free lancer for the company.

Smolinski grew up in Syracuse and his love for music started at an early age: “My dad would just put on Fleetwood Mac albums or The Doors. He was really into the sound of things, pointing out string arrangements. He’s not a musician or producer, he was just a huge fan of music. And his brother was always listening to cool stuff – especially for old guys. My uncle took me to see The Who in 1989.”

His first instrument was the saxophone in fourth grade but he soon switched to drums. “Before I knew it, all the sports I was playing, I just didn’t care about. Everyday for me was two hours just playing the drums.” Smolinski played his first show at age 13. “I had this big, heavy-metal drum set, I had two bass drums and all these drums around me. You could barely see my body.”

After studying music in college, he joined the band, Johny Vegas. He also hired out for others. “If record labels needed a drummer for one show I would get the call and learn a bunch of songs, show up and never see them again.”

He got to know Milwaukee while touring with Johny Vegas, which would often make the Chicago-Madison-Milwaukee circuit, playing with bands like Blues Traveler and Bare Naked Ladies. “We knew it was a great city, especially in the summer and, for me, it was more the size city I grew up in.” After about seven years, Johny Vegas broke up and Smolinski joined The Churchills, and met Kim, a member of the band.

The Churchills had recently signed a record deal with Universal Records. “In New York there was a big network of producers, managers – it’s a game to get to the next level. You make concessions to do that. In the studio the producers had stop watches and you got 30 seconds to get to the chorus – you’ve got to cut – and it’s your art. There were nights when the band went home almost crying. Here in Milwaukee, a lot of the bands that I know – they want to get signed, but maybe that major label pressure isn’t something they want to deal with. Their music is more pure on a lot of levels.”

For almost the first two years after joining the Churchills, Smolinski pretty much lived in his car, traveling from Syracuse to New York City. “I was staying in New York for shows and then every couple weeks just driving to Syracuse. So I moved down there.” The couple eventually lived near Hoboken, New Jersey, but Smolinski had a studio in Brooklyn. The two left the Churchills and went on to join other bands, but eventually called it quits around 2003. “At some point it gets really tiring.”

Smolinski contacted some friends in the industry who had made the transition from music to sound production and helped him land a studio gig creating sounds and music for TV shows and commercials. If you do the job right, Smolinski says, your work goes unnoticed, quite unlike being a rock drummer. “It’s rare that someone says, I love those firework sounds. But it’s just as fulfilling as the roar of applause after playing a set on stage. It’s figuring out what should be there.”

As Smolinski was working on sound design for the Food Network, he also did freelance work for his high school buddy, John Elmendorf, who started Wonder Wonder, a post-production visual design studio, in Milwaukee. Eventually, John asked Alex to join him in Milwaukee, and they became partners in Wonder Wonder Sound.

What gives Wonder Wonder an advantage is the vast library of music: lots composed by Alex and Kim, plus stock music and a network of musicians and composers Smolinski maintains. “If companies don’t have big music budgets, it’s great for me to throw things at them – just because I know my way around my library.” In addition, Alex and Kim have been working on their own record for five years now, with some of what they’ve written for it making its way into commercials and other stuff. “Our work takes a backseat to our clients’ needs,” Alex says.

Among the spectrum of services that Alex offers at Wonder Wonder Sound is mixing records. He recently finished mixing the debut album of Emperors of Wyoming, a project by four friends who played in two separate bands in Madison in the late 1970s and had moved on, but recently decided to create a country band. The group’s drummer is Butch Vig, who played with Garbage but is perhaps best known for producing Nirvana’s smash album, “Nevermind.”

The Emperors created their album (which has been getting good press) through remote collaboration: by exchanging music files and gradually building songs. “The band had never played the music together,” Smolinski notes. “These guys all have their own studios but they knew this was the best place to mix it.” So they sent individual tracks, from wherever they were in the country, to Smolinski, who mixed them together. It was a fun project for Smolinski, whose favorite thing to do is mix, but also because he has great admiration for Vig. “I’ve been listening to his records since the 90’s; he’s an amazing producer and engineer.”

Mixing, producing, and recording are all separate crafts, he notes. “I think it’s great that every artist learn how to record his or her stuff. The big problem is when a great songwriter decides to be a mixer too — it’s really a separate craft. The experience of recording and the knowledge of all the equipment is something I’m not even sure a songwriter should know about.”

Smolinski has done them all but rarely simultaneously. That’s probably why the record he’s creating with Kim has taken so long – because he’s playing, recording, producing and mixing it, leaving countless opportunities to tweak it. With any record you’re recording/producing, you listen to the songs a ridiculous amount of times – making little adjustments here and there. It’s one of the biggest misconceptions about recording. “It’s a lot of work – it’s not fun.”

Smolinski has done this so long, he can quickly sense if a track is missing vocals or needs to change chords. “It’s hard for me to do anything without thinking about work. I’ll hear a song and think, man, the echo on that really stinks.” It’s a totally different side of the brain from creating music, though, and not every musician can make the transition from playing to mixing – nor should they, Smolinski adds.

But it’s something he lives and breathes all day If he hears a sound he likes, he’ll take out his iPhone and start recording it. But, Kim notes, Alex’s iTunes library is not just filled with what he likes. It’s got everything. Someday, the couple hopes, it will have Alex and Kim’s record. 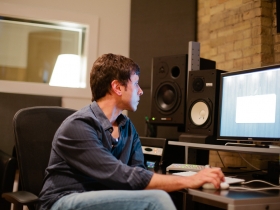 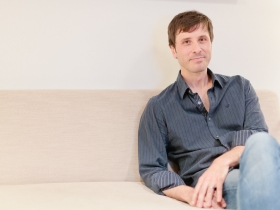 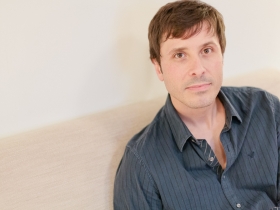