The Common Council approves the reappointment of DCD Commissioner Rocky Marcoux for another term. 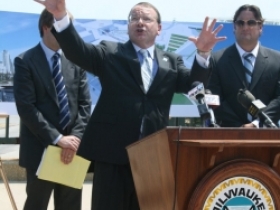 Despite what has been a rocky road for Rocky Marcoux, the Department of City Development Commissioner, his reappointment finally passed the Common Council today, but not without one last bit of resistance.

“I would like to see a new commissioner of this department,” Ald. Nik Kovac stated as he began to reiterate his issues with Marcoux.  At previous meetings he has chastised Marcoux for his alleged secrecy, transparency, and a lack of vision for Milwaukee.

Once again Kovac referred to the Historic Trust Fund Account as “the slush fund.”  And he went on to remind the council that although it wasn’t criminal, the reallocation of funds from this account without council approval, which had been occurring under Marcoux until being forced to stop by the city comptroller, “clearly was a violation of municipal law…to the tune of hundreds of thousands of dollars over the term of a decade.”

Referring to Marcoux’s responses at the last Zoning, Neighborhoods & Development Committee meeting, Kovac called them “unsatisfactory answers.” Marcoux had blamed Ald. Bauman for how the commissioner himself had handled two projects, Kovac said.  This was “disingenuous” and showed “a lack of willingness for proper oversight,” the alderman charged.

Wrapping up his arguments against the reappointment, Kovac argued that residents and developers “deserve consistent transparent criteria…not a black box within city hall.”

At the last council meeting Marcoux’s reappoinment was sent back to committee, but unlike the previous debate, today’s discussion was minimal.  Marcoux’s reappointment passed on a ten-to-four vote, with only Alds. Tony Zielinski, Kovac, Bob Bauman, and Jose Perez voting against it.