Abele vs County Board — Again

Someone leaked the info on Abele's plan for a 44 story lakefront tower, leaving him apologizing to the board. 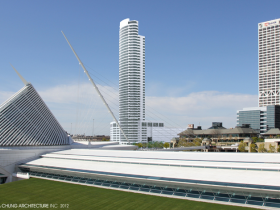 Milwaukee County Executive Chris Abele got caught in an embarrassing situation, announcing his decision to recommend a new 44-story tower for lakefront land now occupied by the Downtown Transit Center, in a Milwaukee Journal Sentinel story on Tuesday. Certainly big news: The Couture, as its called, would become the tallest residential building in Milwaukee. The only problem is Abele hadn’t yet told all members of the Milwaukee County Board about the decision.

So Abele sent a memo to the board — which has been increasingly at odds with the county exec — to try to explain how this happened. “We know the board is sensitive about this, and rightly so, which is why we wrote the memo,” says Abele’s spokesperson Brendan Conway.

Conway contends a majority of the board already knew about the proposal. “A lot of supervisors have been briefed,” he says. But among those who weren’t is supervisor Patricia Jursik, chair of the board’s Committee on Economic and Community Development, which must approve the development. She now says she wants to delay a committee vote on the project, telling JS reporter Tom Daykin the approval process was badly damaged by Abele’s premature announcement of the project. Jursik, you may recall, was at odds with Abele over the confirmation of the appointment of Patrick Farley to run the county’s Department of Administrative Services..

Conway says Abele only talked to Daykin about the lakefront project after the reporter called and said he had all the details. He adds that the executive made sure to have two county supervisors there to talk to Daykin. But they were a minor point in the story, included well toward the end. Uh oh.

Conway denies that Abele’s office was the source of the leak. “Thirty or forty people knew about the project,” he notes. “We’re not pointing fingers. We know how the game is played.”

So who benefited by playing the game of leak? One possibility is developer Rick Barrett, who might have wanted to get a splashy headline for his proposed building before Jursik’s committee met on Monday. H. Carl Mueller, who represents Barrett Visionary Development, concedes this would have been helpful to Barrett’s cause. But it was Daykin who initiated the discussion, Mueller insists. “Clearly Daykin knew all about the proposal. So Barrett agreed to talk to him.”

Mueller, by the way, says this sort of conflict between the board and executive makes development too hard to get approved. “They gotta resolve that stuff, whatever their differences over protocol,” he complains. The county, after all, set up a committee to review the four proposals, which chose Barrett, but now it looks like Jursik wants to reopen the process. The process for approval at the city, Mueller adds, is much clearer. But at the county, he says, “you gotta go through the process all over again. That’s crazy. Nothing ever gets done.”

Did Dan Bice Leak His Own Story?

In other news about leakers in town, let us turn to the John Doe probe. Remember that one? Many insiders had assumed Gov. Scott Walker would be charged as soon as the recall election ended. That hasn’t happened, and as this case drags on you wonder if it ever will. Meanwhile, there has been a whole series of sideshows about who is leaking what, creating a veritable hall of mirrors where it’s impossible to distinguish the real from the illusionary.

A key leaker, according to the Journal Sentinel, is Mike Maistleman. Maistelman is a longtime political insider who typically worked with Democrats, but was originally the attorney for uber-Republican Tim Russell, who is among the many Walker aides who have been charged in the John Doe probe.

Back in January, the Journal Sentinel reported that Maistelman leaked information to radio talk show host Charlie Sykes — specifically that two other Walker aides at the county – Darlene Wink and Kelly Rindfleisch – would be charged in the John Doe investigation. (And they soon were.) The stories have noted that Assistant District Attorney Bruce Landgraf accused Maistelman of being a leaker.

Sykes, meanwhile, has denied being a leaker, and has gotten reinforcement on this point from conservative blogger Rick Esenberg.

It’s certainly possible that Maistelman was not the original source of the leak, but simply heard this rumor from others, and then passed it on to Sykes. So this would make them second or third-hand leakers, I guess.

So who might have Maistelman heard the story from? Why, none other than JS reporter Dan Bice. Bice has been on top of the John Doe story from the beginning; no one knows more about it than him. In an email Bice says he knew ahead of time that Wink and Rindfleisch were going to be charged, but wanted to get this verified by multiple sources, so held off reporting it. Meanwhile, of course, he would have been talking to many sources and tipsters. Did he let slip to Maistelman what he knew? Reporters sometimes divulge what they know to let another source feel okay about confirming the information.

Bice denies this is what happened — almost. “Frankly, I have no recollection of talking to Maistelman about Wink or Rindfleisch,” he says.  So maybe he didn’t, or maybe he just forgot he did. Wouldn’t it be funny if Maistelman, who Milwaukee County DA John Chisholm declared a “person of interest” in the John Doe probe, is some day compelled to disclose where he got his information?

4 thoughts on “The Chatter: Abele vs County Board — Again”