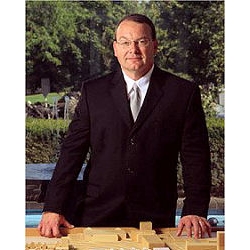 Almost as soon Milwaukee County Executive Chris Abele took office, he was looking for ways to cooperate with Mayor Tom Barrett on boosting city development in places like the Park East corridor. But the Abele administration soon ran into a roadblock: Department of City Development Commissioner Rocky Marcoux.

“The hardest guy to work with on this was Rocky,” says a source close to Abele. While the relationship has improved in recent months, the source notes, Marcoux has generally made it more difficult for the county and city to join forces.

Maybe so, but they still get only one vote apiece.  They’ll need six more to kill the reappointment, which seems fairly certain to be made. “As of today the Mayor’s intent is to put Rocky’s name forward,” says Barrett’s chief of staff Pat Curley.

Bauman says Marcoux did a good job as chief home builder for the City Housing Authority but lacks the “big picture thinking” and is miscast as “the city’s chief articulator for the built environment.”

Kovac agrees. “Ideally, someone in that job is transparent, fair and doesn’t change the rules in the middle of the game” — but that’s not Marcoux, Kovac says.

Bauman says Marcoux has mishandled a number of projects and runs his department in an intimidating fashion. “It’s an East German state over there,” Bauman charges.

Curley defends Marcoux and blames the economic slowdown for any lack of progress in  development. “It’s really a lousy market,” he says. He argues that Marcoux did a great job marshaling the city’s forces in its effort to convince the Kohl’s company to move Downtown. “That was a pretty impressive showing.”

To which Bauman is scornful: “General McClellan gave a great performance at Antietem. But did you win?” Kohl’s, of course, turned the city down, “and the real estate community is saying Rocky blew it,” Bauman contends.

Bauman says developers like Barry Mandel and Gary Grunau have complained to him about Marcoux: “Grunau said we’re never going to support the mayor again unless they get rid of Marcoux.”

“The mayor has known how the development community has felt for years,” Kovac contends. “This is a mayor who needs to be pushed.”

Curley concedes developers are not happy with Marcoux, but contends that’s a universal condition, as developers push the city for subsidies and other help: “I think with any commissioner developers get unhappy.”

In the background to this issue is the feeling that the administration of former Mayor John Norquist was much more visionary on development. Curley concedes many developers now see that time as “a golden era,” but says they also had complaints back then.

Norquist was known for his passion and in-depth knowledge about urban design. By contrast, Kovac charges, “both Marcoux and the mayor are blind to good design. I think the mayor would even agree to this weakness. It’s okay to have a weakness, but your job is to staff with strength for your weaknesses.”

Kovac would like to see a national search for a new commissioner. “I think the mayor has hit two home runs, with Police Chief Flynn and with Art Dahlberg, head of the Department of Neighborhood Services. Both were the result of national searches.”

Kovac says at least three other Common Council members will join him and Bauman in opposing reappointment. “I think most are undecided.”

But the fifth and perhaps most outspoken fan of Marcoux was near South Side alderman Jim Witkowiak, who was defeated in April by Jose Perez. Perez (who once worked at DCD and reportedly had run-ins with Marcoux) is expected to oppose reappointment. (Perez did not respond to requests for comment.)

The decision is likely to have a major impact on future development in Milwaukee.

-Note to readers: I will be on vacation for two weeks, look for the next column on July 10.