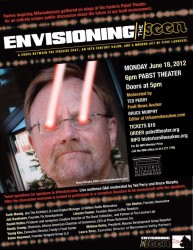 The marketing images might be a bit weird, but the event will certainly be worth your time.

The Pabst Theater plays host to Envisioning the Seen: Milwaukee’s Future tonight, June 18th. Ten Milwaukeeans and two moderators will hold an open-ended, fireside-style discussion, followed by an audience question-and-answer period. The discussion serves as the next step from Historic Milwaukee’s Remarkable Milwaukee roundtable discussion that was held on January 30th.

Doors open at 5 p.m. and the program begins at 6. Tickets cost $10 and can be purchased online, or at the door.

Moderators include our own Bruce Murphy, as well as Ted Perry from Fox6 News.

Tarik Moody, aka The Architect, DJ and Digital Manager at 88Nine Radio Milwaukee

Originally from Atlanta, but having lived all over the country, Tarik Moody graduated in 1996 from Howard University’s School Of Architecture in Washington DC. He practiced architecture in Detroit, and Minneapolis. While working full-time in the architecture industry in Minneapolis, he volunteered for a local community radio station called KFAI. Eventually he hooked up with DJ Jennifer at KFAI and became co-host of the station’s long-running show, “Groove Garden.” In 2003, he became one of four hosts for KFAI’s “Local Sound Department.” In 2005, he got an opportunity to host his own radio show called Rhythm Lab Radio on Minnesota Public Radio’s music station called The Current. The name of the show is called Rhythm Lab Radio. Then in 2006, he was approached from the new Milwaukee radio station 88Nine RadioMilwaukee. Tarik made the leap from architecture to radio, and now works as the evening music host, and digital and online community manager for 88Nine RadioMilwaukee. He still hosts the award-winning Rhythm Lab Radio on 88Nine RadioMilwaukee and still has a passion for architecture and design. Tarik served for 14 years in the Army Reserves. His last position was a Captain in a Public Affairs unit outside of Chicago.

Juli Kaufmann is President of Fix Development, a consulting company leading projects that create more sustainable communities. One of her most recognized projects is The Clock Shadow Building– home to Wisconsin’s first urban cheese and ice cream manufacturing facility in the Historic Walker’s Point Neighborhood. Juli is also a founder of Fund Milwaukee, a crowd-funding investment group that seeks to match mostly unaccredited local investors with opportunities to support local businesses. Juli has received multiple awards for her exceptional green projects and her innovative, entrepreneurial business strategies. She is primarily interested in social enterprise with a quadruple bottom line- for the benefit of people, planet, culture, and profit.

Lincoln Fowler is a founder of Alterra Coffee and has lived in/around Milwaukee since age 2. A Shorewood kid and Marquette H.S. graduate (’85), Lincoln went on to Middlebury College and graduated with a B.A. in political science. He promptly returned to Milwaukee with a desire to build high performance home audio loudspeakers. Fowler audio had a short, 4 year life, but sleep-deprivation led to a need for strong coffee and subsequently, Alterra. Lincoln lives on Milwaukee’s East Side, plays ultimate frisbee, like to muck with plumbing and digs bourbon.

Daniel Holter, producer and composer, Creative Director at The Burst Collective, and Partner at The License Lab

Music produced and composed by Daniel Holter can be heard on virtually every major television network around the world (Mad Men, American Idol, NFL on Fox, 20/20), as well as movies (The Blindside, Sex & The City), video games (Call Of Duty: Modern Warfare 3), and commercials (Apple, Nike, Google, Gatorade). He is the creative director of The Burst Collective (with their recording studios in Wauwatosa recently hired by Rihanna and Chester French), and the founding partner of The License Lab, an international music publishing and licensing company. A former resident of downtown Milwaukee, he eagerly anticipates a return to city life.

Ian Abston founded Newaukee in 2009 after moving to Milwaukee following his graduation from UW-Oshkosh with a B.A. in Marketing. Over the past three years Newaukee has evolved from a social group to a young professional movement. He has turned his involvement with Newaukee into a platform for collaboration with like-minded young professional groups in the city.

As Chief Executive Officer, Randy Crump has been central to the development and success of Prism Technical while growing other businesses in Wisconsin since 1995. As founder Randy developed a business that has monitored or coordinated participation of disadvantaged (or emerging, minority, small, women-owned, Disabled Veteran owned, etc.) businesses on some of the Wisconsin’s most high-profile projects, including, Milwaukee’s Downtown Street Car, Century City, the Brewery, Lambeau Field, Miller Park, Summerfest, Midtown Center (Milwaukee), Milwaukee Public Schools Neighborhood Schools Initiative, Milwaukee City Hall, the Marquette Interchange, several notable UW Madison projects and more. Randy’s commitment to excellence and equal opportunity led to his appointment as Chair of the African American Chamber of Commerce.

Young Kim has been the Executive Director of Milwaukee’s Fondy Food Center since 2003. The Fondy Food Center’s mission is to connect North Side Milwaukee to local, healthy food – from the farm to the table. The organization fulfills its mission by operating the city’s largest farmers market, food stamp and produce consumption incentive programs, cooking education, and, most recently, a new 80-acre vegetable farm in nearby Port Washington. A second generation Korean American who was born and raised in the American Deep South, Young calls himself a “hardcore foodie” and is always on the lookout for culturally significant recipes. When he’s not thinking of food and food systems, he likes to read poetry, restore vintage fountain pens, and work on his standup comedy routine. Young is a 1985 graduate of Oberlin College. He lives in Wauwatosa with his wife, the Rev. Suzelle Lynch, and daughter, Grace.

Melissa N. Goins, Founder and President of Maures Development Group, LLC (Maures), became actively involved in commercial real estate after the completion of Marquette University’s Associates in Commercial Real Estate Program (ACRE), which seeks to create diversity in the industry through networking, training and placement. After the program, she took her passion for real estate development and applied it to Milwaukee’s central city where she recognized an acute need for reinvestment. Her firm, Maures, is a real estate development company focused on revitalizing inner city neighborhoods with residential and commercial development. Melissa says her firm’s mission is to show love for urban areas: one building, one business, and one opportunity at a time.

Laura Bray is the executive director of Menomonee Valley Partners, Inc. (MVP), a public-private partnership facilitating the redevelopment of the 1200-acre Menomonee River Valley to support economic development, quality jobs, community revitalization and environmental health. Bray has worked in urban redevelopment for nearly two decades, beginning with service through the Jesuit Volunteer Corps as a community organizer in Bridgeport, CT. Bray currently serves as a board member for the Friends of the Hank Aaron State Trail and a member of the Dean’s Council of Excellence at Marquette University’s College of Business. She and her husband, Jeff, live in Milwaukee with their 5-year-old son Isaac and 2-year-old daughter Selah.

Following the event a cocktail hour will be held at Clear at the InterContinental Milwaukee Hotel.
Categories: 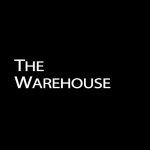