Free Bus Rides, Moneyball and Renderings, Crime on Buses Way Down, and More

Welcome to the fourth installment of Eyes on Milwaukee. This week we take a look at free bus rides for St. Patrick’s Day, the idea of applying Moneyball principles to project renderings, how Police Chief Flynn has apparently managed to cut in half the service calls originated from MCTS buses, the notion of a new union for UWM, and more.

The Milwaukee County Transit System will be giving away free bus rides again on St. Patrick’s Day thanks to MillerCoors. Starting at 6 p.m. on March 17th until the end of service all rides will be free. This excellent partnership has been in place since 1994.

Ridership is up overall in the past year.

Mary Louise Schumacher is seeking opinions on The Moderne in her latest column, “The Moderne, an early peek.” She introduces the idea of the “rendering-to-reality ratio,” which as she defines it is “the degree to which a finished building fulfills the vision presented in the architects’ renderings.”

The notion of a ratio to quantify the reality versus the rendering is worthwhile if only for the fact that I think public sentiment is altered by the quality of many renderings.

Given that Micheal Lewis isn’t coming to town to write a book about the Moneyball-esque evaluation potential of our local architects, what do you say we give it a try? What architecture firms consistently produce renderings that end up matching reality?

Evidence is starting to leak out that the bus patrols put in place by Milwaukee Police Chief Ed Flynn are working in a big way. As was recently mentioned at a meeting of the City of Milwaukee Public Transportation Review Board, incidents on buses are down approximately 45% since Flynn started having patrols board buses as part of their regular duty.

The battle between Chief Flynn and Sheriff Clarke over the issue stems from a reduction in sheriff’s deputies at Milwaukee County. On the face of it, Flynn appears to have generated a big reduction in the number of incidents by simply placing police patrols on buses for brief periods between 2 and 4 p.m.

A New Union for UWM?

The UWM Post thinks it’s time to start over with the Student Union. I agree. The building should serve as a gateway to campus. It would also serve as a great forum for Professor Donald Shoup, author of The High Cost of Free Parking, to give a lecture on parking policy, an issue both Dave Reid and I weighed in on last week.

Russ Davis is looking to put a new restaurant in the Menomonee Valley. Before anyone question’s the wisdom of locating a restaurant near a coal power plant, stop to remember that Sobelman’s serves up some of the best burgers in town from the valley, as well as the nearby locations of the tourist magnet Harley-Davidison Museum and Potawatomi Casino.

The Clock Shadow Building (sometimes referred to as the Milwaukee Fix) is nearing completion on South 2nd Street. The Journal Sentinel has a great run-down on the project, noting that the project achieves a higher standard than even LEED Platinum requires. The building is quite possibly the greenest building in Milwaukee.

Dermond Property Investments will bring their Lower East Side apartment proposal for 1601 N Jackson Street (Jackson and Pleasant) before the City Plan Commission again on Monday. Their revised plan increases the number of units to 36 and increases the number of parking stalls from 34 to 38, as well as ever so slightly setting the building back. NIMBY concerns about the height and amount of parking were raised at the initial meeting.

Holding the file in January seemed odd given that the development would sit just up the hill from The North End and the Flatiron Condominiums, two projects that have a very urban form. Hopefully the City Plan Commission approves the project this time around.

The City has a project page on the Dermond proposal.

I missed mentioning this in the past, but hopefully you’ve already heard, the former Grand Cinemas lobby on West Wisconsin Avenue will be converted into an information booth on downtown Milwaukee for visitors. The location will be staffed at least 40 hours a week by Milwaukee Downtown. The idea originated with Dan Casanova at the Department of City Development.

Milwaukee Magazine has a profile of Barry Mandel.

Alderman Bob Bauman continues to lead the hunt for more documentation on the Kohl’s negotiations.

Oro di Oliva is going to open a new location at the Milwaukee Public Market, replacing the recently departed Rupena’s.

Clutch Milwaukee, the new tapas restaurant to open at 1504 E. North Ave, is moving along. It looks like the restaurant is set to open April 1st.

I went a different route for Photo of the Week this week, and opted for a photo of one of the new streetcar shelters for the Portland Streetcar. This stop represents a cheap upgrade to the stop that can give an ordinary bus shelter a better sense of place. 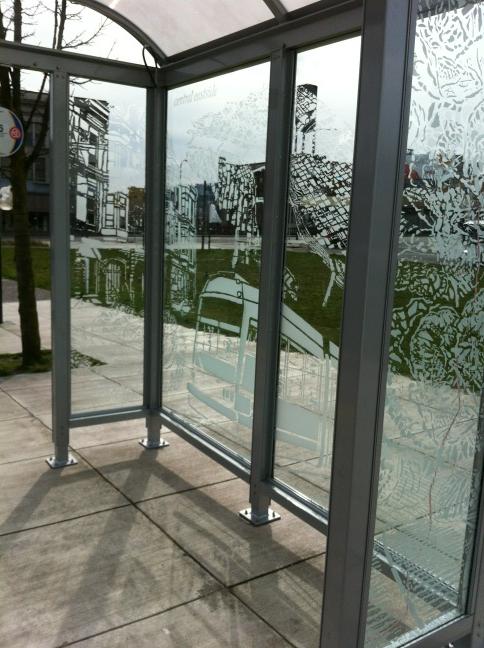 2 thoughts on “Eyes on Milwaukee: Free Bus Rides, Moneyball and Renderings, Crime on Buses Way Down, and More”