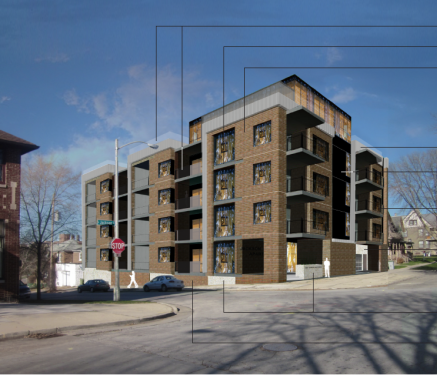 Dermond Property Investments’ request for a change in zoning for the properties 1601 N. Jackson and 522 E. Pleasant St. from Local Business (LB2) to a Detailed Planned Development (DPD) was held at today’s Zoning, Neighborhoods & Development Committee.   The change in zoning is needed to allow a 34-unit apartment building to be developed on the site.  The site’s current zoning would only allow for 12-units to be developed, though the massing and height of the proposal is consistent with the current zoning.

Max Dermond, principal of Dermond Property Investments, explained that each unit in the five-story apartment building would include balconies, underground heated parking, and in-unit washer and dryers.  Additionally, he recognized that residents had brought up a list of concerns including parking, height, architectural style, traffic, and density, but that they were working to alleviate many of these issues.

Alderman Bauman echoed the concerns regarding size saying “as an infill project this is totally out of scale.”  The Project Designer, Joel Agacki of Striegel-Agacki Studio, pointed out that “by right someone could even do something bigger”, and that “there are similar residences within eye-shot of the site”.  Also weighing in on the project, Alderman Murphy added “I’m a little concerned about the size of the building and the number of units.”  A few residents showed up to oppose the project, all echoing the same points “it doesn’t fit”, and it will create parking issues .

Alderman Kovac, who represents the area, explained that “this is certainly a completely unique street”, in that while it has a variety of single family homes and duplexes it is also just on short block away from the Park East redevelopment area.  And that depending on which way one is facing there are vastly different building styles and heights in the near neighborhood.  He summarized saying,  “there’s a mix”, and indicated that despite neighborhood opposition, which he pointed out was primarily about parking, that he believes this project “is right on the border”.

At Alderman Kovac’s sugestion, the request was held to allow for the developer to revise the design to make it more appealing to the neighborhood and the committee.