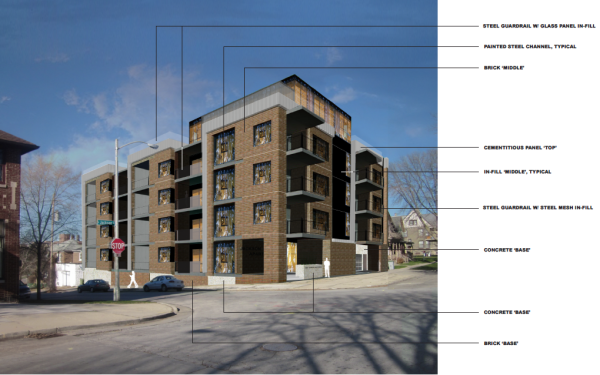 Dermond Property Investments’ request for a change in zoning for the properties 1601 N. Jackson and 522 E. Pleasant from Local Business (LB2) to a Detailed Planned Development (DPD) will go before the City Plan Commission on January 9th, 2012.  The developer plans to build a five-story 34-unit residential apartment building that will consist of one-bedroom apartments and studios.  Each unit will have a covered outdoor terrace. The project will be located at the intersection of Jackson St. and Pleasant, the former Joey’s Restaurant location.  In excess of the zoning requirement of 18 off-street parking spots the building will include 34 enclosed parking spaces, 24 in the basement and ten on the first floor.  The project will target young professionals that prefer to live in a high-end apartment building with easy access to shopping, dining, and entertainment.

UPDATE The proposal was originally reported as a four-story apartment building, but including the party room it is a five-story building.