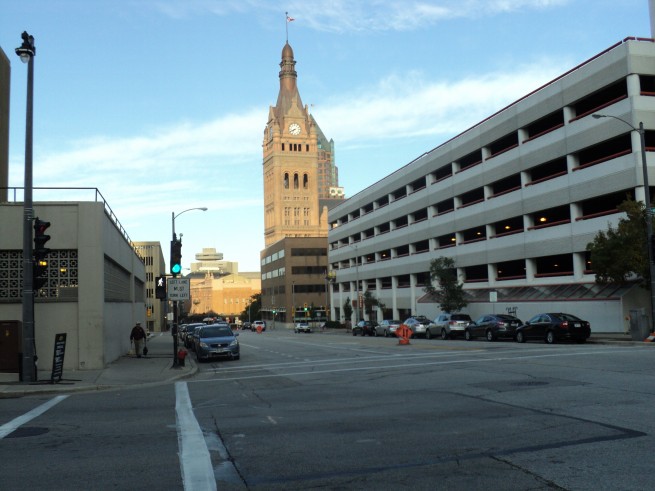 It has been more than a week since Wells Street was converted to two-ways, and it has indeed been Carmaggedon.  Drivers have been confused by the unusual street configuration.  Two-ways, really?  The fear generated by being able to turn right and go East on to Wells St. has caused mass hysteria causing more than a few people to quickly park in available parking spots.  In fact just the other day there was a three-car-and-one-bicycle backup getting around a FedEx truck.  And now there are more cars than one can count driving close to the speed limit.  Yes, it has been Carmageddon!

Well no, much like the overhyped L.A. Carmageddon.  Similar to when the 405 expressway was closed temporarily, or when the Park East Freeway spur was removed, the conversion of Wells St. to two-way traffic has actually not brought about mass confusion, traffic jams, or a significant increase in congestion.  In fact it appears drivers are quickly becoming accustomed to the new configuration.  Drivers are now turning right onto Wells St. instead of driving around the block to get to a parking spot, driving closer to the speed limit down Wells St., and are trying new routes to get to their destination.

As this two-way street conversion has once again not brought Carmageddon to the streets of Milwaukee, it is clear the continued effort to rebuild the two-way street network is on the right path in downtown Milwaukee, but is far from complete.  The incomplete conversion of State St. needs to be rectified in the future, Broadway is just one block short of better connecting the Historic Third Ward with downtown Milwaukee, and Jackson St. still becomes a race track after crossing Wells St.  These three are just some of the segments left to convert to two-way traffic in downtown Milwaukee, but if recent history tells us anything, it is that Carmageddon won’t be around the next corner.