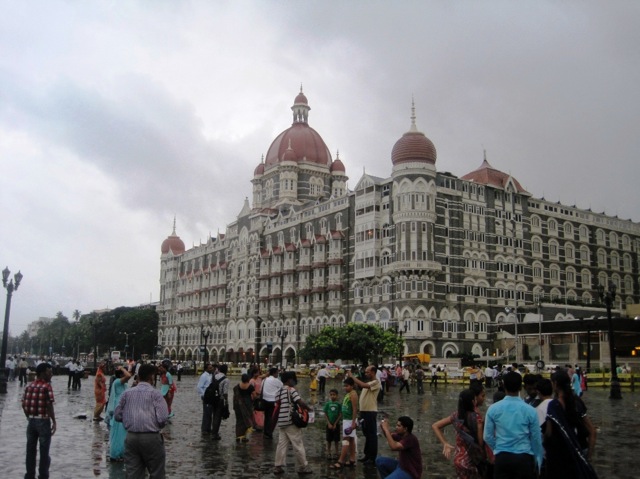 The Taj Hotel, or home during our shows in Mumbai,  is a slightly musty, superbly classy, truly impressive relic of colonial days. It overlooks the Indian Gate, a massive stone arch built to honor King George, and on to the Arabian Sea and the busiest port in south Asia. Terrorists attacked The Taj in 2008 and killed more than 40 guests and employees. When Obama recently visited India, he came first to Mumbai and stayed at the Taj. On several levels, the hotel is a powerful symbol. Security is heavy.

The size of Mumbai is staggering. The city just keeps going, ever noisy and busy. We’re 700 miles south of Delhi, our first stop, and on the western coast. The weather is noticeably more tropical. It’s monsoon season; hard downpours drench the city nearly every afternoon or evening. The concierge lends out umbrellas.

Two nights ago, we performed at the W.B. Chavan Auditorium, a cozy 600 seat theatre. We arrived that morning to find a willing, fairly capable crew, including janitors and carpenter from the American Center. The lights had to be hung and focused, soft goods had to be moved and trimmed, parts of our set had to be assembled, the light board had to be moved, and so on, all in 4 hours. It’s a good thing we’d already done it twice before.

The performance was solid, though not as bright and clear as in New Delhi. But we’re settling in. An engaged audience laughed in the same places, but the final applause seemed more polite than enthusiastic. Perhaps that’s just Mumbai, the center of film (Bollywood) and TV in India, and also a strong Indian theatre center. Perhaps tastes or loyalties are more defined. But they certainly got our play, John Kishline’s Success, and appreciated the work.

The new American General Consul, just two weeks on the job, gave a few opening remarks, emphasizing (as usual) the multicultural nature of our production, casting and rehearsal process. Our Indian actress, Kriti Pant, is our hook, in a way. It only works because she’s skilled, so it doesn’t come off as a gimmick. Anyway, Success continues to be a success.

Yesterday, actress Deborah Clifton and I taught workshops at the Academy of Theatre Arts at Mumbai University. We each worked with  20 or so second year-acting students. Deborah’s voice workshop seemed to go very well. The Academy had asked for my The Scene is Not the Words workshop, which focuses on getting under the text to the real communication among actors. Challenging; fewer than half the students spoke English and most did not read it well, so I could use just a little of the material I’d brought. But we found some teachable moments and the students were enthusiastic and appreciative. It’s a pleasure to work with young actors here.

The Academy, just 8 years old, attracts students come from all over the country to attend the two year program. Most stay in Mumbai, where the work is, after they graduate. I wonder about their career chances. The academy’s assistant director, over tea, shows us a daily newspaper with two full pages of ads for plays running two and three times a day. They’re all commercial productions in Hindi or Marathi (the dominant regional language in Mumbai). From the ads, most appear to be comedies or musicals. It’s populist, but it’s a lot.

The Academy’s theater is run down by western standards, but a new building is coming next year. After the move, the Academy will start a repertory company. They hope to bring in foreign directors, sometimes. So they’re moving forward.

I drift to sleep thinking of the faces, the voices, the smells, the humidity, the clothes, the food, and the rhythms here; all unique, all vibrant, and all around us.

India is 64 years old today. We have the day off.

In 1947, Ghandi’s non-violent tsunami brought the mighty British Empire to its knees. At that point, the national illiteracy rate was estimated at 90%. Today, some provinces claim 100% literacy.

I go out to pick up my laundry (as the hotel laundry service is ridiculously expensive); a man on the street who prayerfully ties a red and yellow string of yarn around my wrist while blessing my name, then dabs my forehead with red paint and gives me a few sugar balls to eat and a flower to put in my pocket for good luck. All for an Independence Day donation, of course. 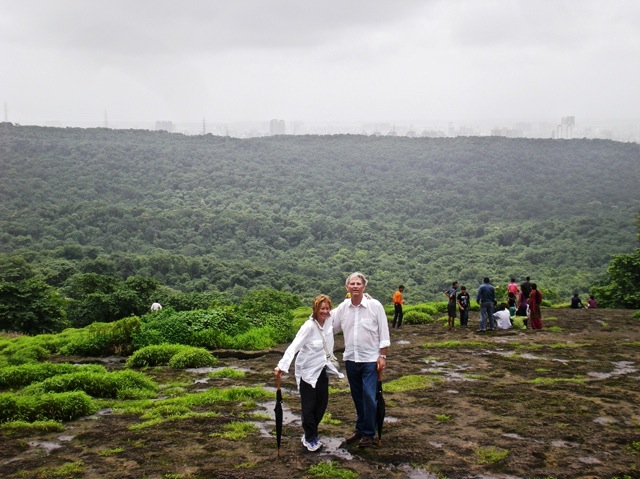 Deborah Clifton and John Kishline in Sanjay Ghandi Park with the Mumbai skyline in the distance.

We’ve arranged for a driver I met on the street to take us on a day trip up to the Sanjay Ghandi National Park, north east of the city, just beyond the thicker urban sprawl. The park contains the Kanheri Caves, an extensive mountainside network where Buddhist monks carved rooms, steps, ornaments, benches and even a temple. The nearly 200 hundred caves date to the 1st century AD.

Admission is free on this day, and Indians of all ages crowd the park. Women in bright, beautiful clothes sell peeled cucumbers and mangoes by the park entrance. Each vendor wields an umbrella or stick to ward off the monkeys.

From the top of the mountain, above the network of trails and caves, we look back over forested hills to the hazy sprawl of Mumbai. The contrast is stark. The view seems to put even the scale of that metropolis into some perspective. Nature is still bigger. But the wind leaves the faintly dirty, dry city taste on my lips.

Streams run through the park, alongside and around trails and stone steps. Young Indians, clothes sopping, frolic in pools and small waterfalls. It’s a fun holiday scene.

We stop at a Jain temple at the mouth of the park. Three 40-foot statues of naked men (anatomically correct) tower over a flat marble expanse. Below, under a canopy of tarps, a small service goes on, with flowers, incense and bells. A small assembly of  worshipers pray as celebrants pour water over the head of a small bronze figure. A man and a woman pray and sing alternately, contrapuntally almost, over a P.A. system. To one side, two older men, quite nude, sit in low, folding chairs. In this branch of Jain, the god is naked and so are some of the (male) faithful. Our driver tells us that Jain is a religion of bankers and diamond merchants in India, and so very wealthy. I had thought Jainism preceded Hinduism, but he says it is quite new. Or maybe the nakedness is new — or something. In any case, this temple and these statues are old. 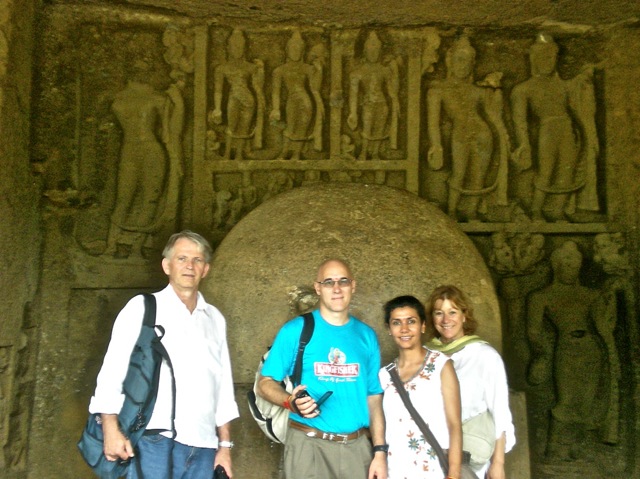 We drive back through the largest slum in Asia, perhaps in the world. A million people live in two square kilometers, many homeless, many squatting under tarps of blue plastic and sleeping by roads, and many living in filthy multi-story buildings with laundry and blue plastic draped from railings and covering windows. Slum Dog Millionaire was filmed here and, some years ago, a scene in Salaam Bombay.

The scale of the slum is astonishing, as so is its industriousness. Residents meticulously sort and recycle trash. Everything imaginable is recycled and resold. The slum buzzes with enterprise and activity. Our driver points to some beautiful new high-rise office towers across an expanse of slums, and to green space beyond. He tells us that 5 years ago, the ground beneath the towers was also slums. Mumbai has 22 million people, he says, and some 5 million live in slums. Space is so prized that even these filthy, squalid apartments are extremely costly to own, because they’re in the center of the city. Location, location, location.

We stop by the largest open-air laundry in Mumbai (or perhaps anywhere). Several acres of operations sprawl across rooftops and in between buildings of one and two stories. Workers move laundry with long ropes and pulleys, vats, water channels, hoists and long hooks, and dry it on long lines. Maybe two score of mostly shirtless men climb around in the steamy heat, washing and hang-drying towels, pants, shirts and linen from all over the city. We stand above it all, on a bridge on an adjacent highway; a strange combination of smells wafts up. Passing Indians, too, stop to gaze down on the maze-like bustle of the laundry. India is teeming, indefatigable, on the rise. 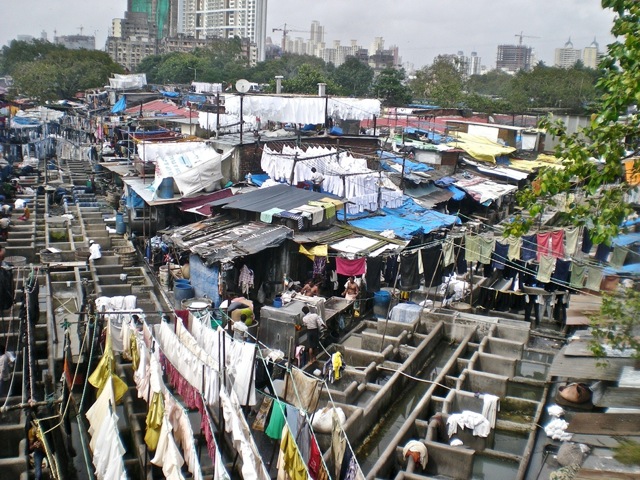 Above the bustling Mumbai slum laundry.

Back in the regal ballroom of the Old Taj that evening, we take in a special Independence Day concert. A trio (Indian flute, tablas, guitar) plays what sounds like a cross between classical Indian forms and jazz. For several of the numbers, the tabla player turns on a digital beat or chords as a foundation. The flutist is technically masterful and creatively gifted. As long as he plays, I’m captivated. A quartet, featuring a well-known Indian singer, follows. Violin, a string drone instrument and two-headed drum backed the singer. The singer is skilled and facile. I find the group’s improvisations less satisfying than their set compositions.

We finish the day with an absurdly expensive drink at one of the hotel bars. I reflect on the Taj, a many-faceted icon. Earlier in the day, we heard that a Rajah, denied lodging in the city’s best English hotel, which didn’t allow Indians, built the Taj three blocks away. We drove by the old English hotel, now largely vacant, filthy and decaying, a testament to the end of British rule and the rise of a free and independent India.

0 thoughts on “Actors in India 4: Independence Day in Mumbai”