With the announcement that Target is opening a CityTarget store on State Street in Chicago’s The Loop Neighborhood, the idea of a downtown Milwaukee Target has been generating a considerable amount of buzz in the past few weeks. Unfortunately for those wishing to shop at a downtown Target, none of that buzz has come from Target. Assuming Target was interested though, what location and store format would best match the desires of Target-loving shoppers with the needs of the city to continue to develop a healthy urban core in and around downtown? Let’s explore.

First, it’s important to examine what Target typically does in the Milwaukee area, as this should present a good indication of what they would likely do downtown if there were no restrictions.  The three Target’s nearest to downtown are on Miller Park Way, South 27th Street, and Chase Avenue. None are urban in form, in their locations they’re the standard suburban big box retail. The parking lots are the same size of the stores themselves, clearly not something fit for downtown.

Next, it’s worth looking at what Target has done in other urban locations to give an indication of what the Target-loving urbanist might aspire for Target to build in Milwaukee. To-date Target has always focused on building stores that were at least 125,000 square feet in size, but they recently unveiled the “CityTarget” concept of slightly smaller stores (60,000 to 100,000 square feet) for urban neighborhoods. Unfortunately no detailed plans are available for review of any of the proposed CityTarget’s. But it is worth looking at what has been built though, including stores in Chicago, Seattle, Stamford, Minneapolis, and St. Louis. 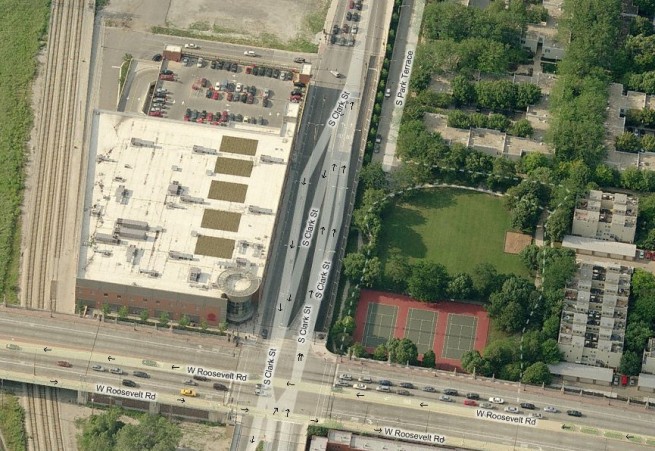 Chicago has an urban target located in the South Loop neighborhood. It is blocks from two rapid transit stops, on a bus line, walkable by design, surrounded by develop-able land, and contains no surface parking. It appears remarkably urban given that much of the land around is underdeveloped to-date. It is well-located for the future as the blank walls on the back of the building abut the railroad tracks. 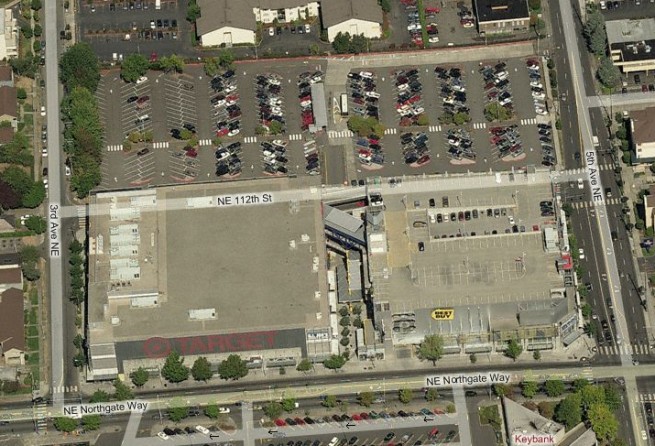 Seattle has a Target located across the street from Northgate Mall. It is connected with a Best Buy and shares a parking garage with the electronics store. It is more walkable, but is surrounded by surface parking on an adjacent parking lot. Other retail spaces are part of the two buildings, making the facility a larger demand generator. UrbanReviewSTL has a good write-up on the development.The space appears more attractive at street-level. 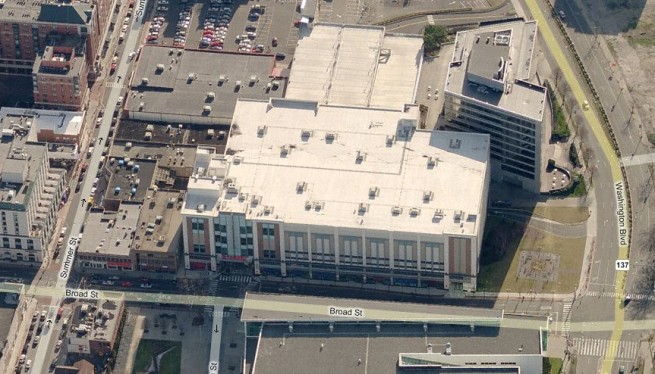 Target built an urban store in Stamford, CT. It is in a multi-story, pedestrian-friendly building that includes an attached parking deck. It is connected to a number of other retail outlets. The building is big and box like, but delivers a far more urban big box store than Target typically builds. 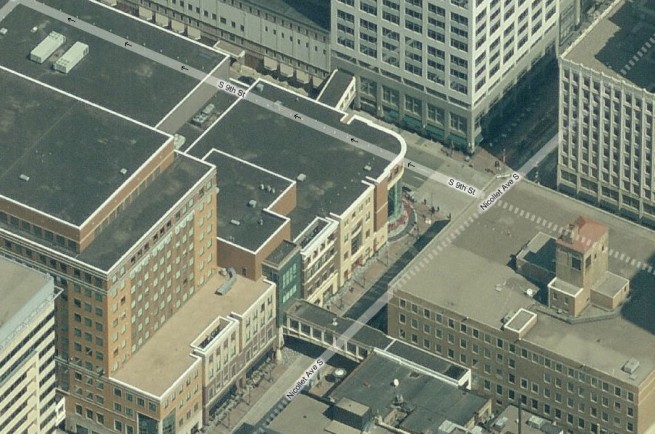 The Target in this aerial view is the building with the round corner. It is walkable, incredibly urban and transit acessible, and located in the core of downtown Minneapolis. It is an outlier though because it is connected to the Target headquarters. 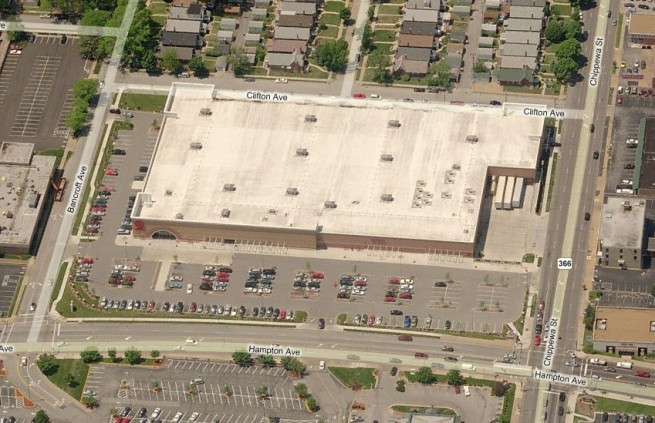 This is a new Target in St. Louis. It is a couple miles from downtown, and located in the heart of a residential neighborhood. It is more urban than the Schucks supermarket across the street, but is still quite suburban in nature. It is setback from the street quite a distant, and features a fair amount of surface parking. It’s better than any Target currently in Milwaukee, but not urban enough in design to fit within the character of downtown Milwaukee.

Given a choice between all of the presented targets, it seems clear that the downtown Minneapolis best integrates with the urban fabric it occupies. Would Target build that urban of a store in Milwaukee though? It seems unlikely at this point. If Milwaukee is to land a Target, it would seem best to aspire for the Chicago and Seattle examples, while avoiding the not-quite-suburban-or-urban nature of the new St. Louis Target.

Landing a mixed-use Target with a housing or office component would be the holy grail of urban big-box development, and could theoretically be placed on any vacant parcel as a long-term demand generator. The mix of uses would prevent the building from becoming a black hole in the urban fabric at its off-hours.

For a Target to locate in the Park East, as Bruce Westling has proposed, it would need to be a pedestrian-friendly, multi-story building to comply with the Park East Redevelopment Plan. A Target in the Park East is an idea worth supporting, but only if it is a mixed-use building and works to eliminate the blank walls that plague big box stores. While the Park East Redevelopment Plan is about to be amended for the creation of the MSOE Parking Structure, it would be foolish to further amend it to allow a big-box store to be constructed adjacent to proposed parking structure that did not comply with the design guidelines of the plan.

A mixed-use Target faces an uphill battle though because of the currently diminished strength of Milwaukee’s downtown condominium, office, and retail markets. Furthermore there are a number of vacant parcels available for development. Putting together a mixed-use building for Target is going to be complex, and it seems unlikely that any developer would go through with it if they didn’t have to. RSC & Associates had discussions with Target about locating in a mixed-use development in their Park East parcel, but their parcel remains closer to an urban farm than a mixed-use building (with no public indications of that changing anytime soon). A proposal by Ghazi Company for 4th and Wisconsin could have included a large retail anchor as well, but that was a victim of the economic downturn.

If Milwaukee gets a Target downtown in the near future, it’s likely going to come in the form of a single-use building.

Where would a single-use Target fit well? Given that it would likely have a number of blank walls, and not-be a 24 hour demand generator it makes the most since to put it on the fringe of downtown where it would abut another blank wall. It would work even better if it could take advantage of existing parking assets. Given those constraints, a single-use building to house Target (or even Wal-Mart which is rolling out smaller urban stores itself) would best fit near Interstate 794 in Westown. 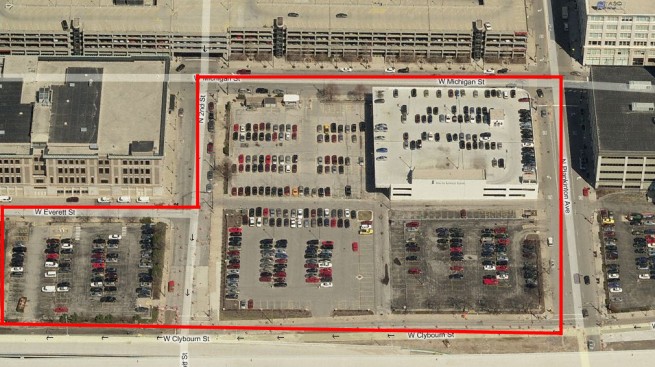 If Target were to locate on any of the surface lots near Interstate 794, it could be connected to Grand Avenue to breathe new life into the facility and share the parking garage.

The potential store should still be designed in a pedestrian-friendly nature for the sides of the building away from the Interstate or an alley, but allowing the building to have a few largely blank walls would reduce design costs and constraints making it more likely to actually happen should Target or another big-box retailer decide to open here.

A Target would be a welcome addition to downtown Milwaukee, but only in the right-form or location.

17 thoughts on “Target in Downtown Milwaukee”