Wild Space takes it to the bank 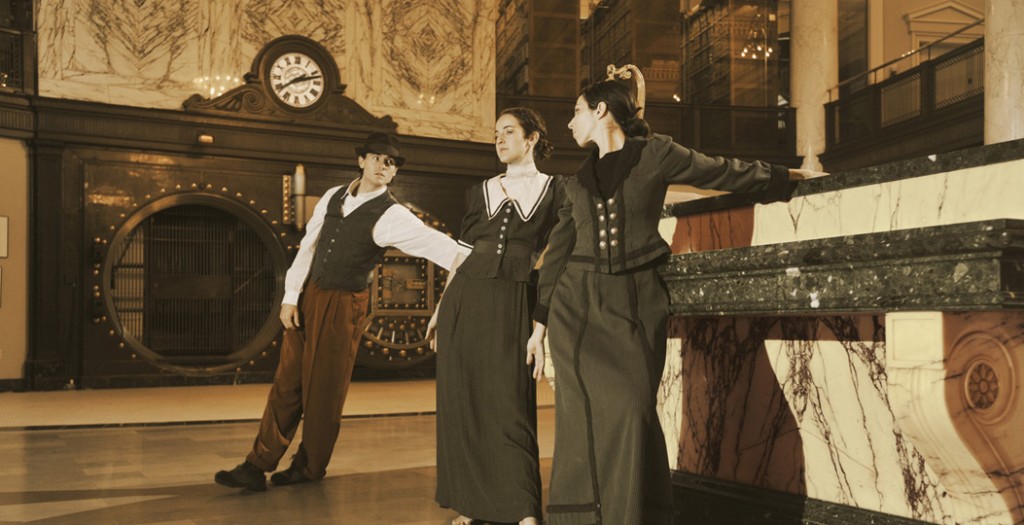 Immersion in the particular magic and mystery of the old Brewer’s Bank building is the point of Debra Loewen‘s Past Present, which her Wild Space Dance company premiered Thursday. Loewen made the piece specifically for the wedge-shaped 1913 structure, now home of the Milwaukee County Historical Society.

She succeeds often during the 90 minutes, most completely in remarkable vignettes for Jade Jablonski in the basement vault and for Monica Rodero, tucked away in a corner on the main floor. In these passages, Loewen places us in someone else’s dream.

Rodero, curled up in a chair next to softly glowing lamps, reads a book. A little door with a frosted glass panel is to her left. A note slips from under the door and startles her. She’s uneasy. A light flips on, and we see a pair of hands (Allison Kaminsky‘s) against the glass. The light goes out; Rodero sits to read, but can’t relax in the something’s-gonna-happen moment. She tries the door, tentatively; won’t open. She ducks when the light goes on again; again, hands, then a ghostly face pressed to the glass. Lights out.

Jablonski — a tall, curvy beauty in a long slender skirt and antique blouse — is the picture of the 19th century working girl. Behind the cage in front of the basement vault, she moves document boxes and mimes fussy business with her hands. But everything is off, somehow. She moves in quick, tiny geisha steps or a sailor’s walk that makes her appear to glide across the floor. She shifts abruptly from smooth slow motion to quick, jerky staccato. Her placid, lovely face warps grotesquely now and then. She could be sleepwalking. I’m not one to interpret this bizarre, David Lynch-style episode, but I can say that it was gorgeous and creepy at the same time, and gripping every second.

In the opening bit, the audience observed from below as the dancers worked above on the mezzanine that runs the perimeter of the building. The dancers were elusive at first, as they emerged from behind the impressive columns and into the bays between them. Their arrangement and gestures emphasized the odd design of the building. We stood near the south wall, in the broad base of the wedge. They danced along the sides of the building, as it narrows to its northern point, and thus emphasized the way the narrowing architecture forces perspective.

The audience occupied benches to observe six presentational pieces played on the broad open floor by the south wall. At intervals, projected photographs of Downtown Milwaukee between maybe 1900 and 1930 appeared on the walls. Sometimes, the dancers, in assorted period garb, went flat against the wall to blend in with the old photos. Often, recorded oral histories blended with music accompanied the movement.

But this 25-minute suite within Past Present didn’t quite work. First, the acoustics made it impossible to discern the oral histories and thus apply them to the meaning of the dances, meaning that remained frustratingly obscure. More important, while the dances differed in their steps and gestures, they all spoke in the same low monotone. Loewen’s stubborn avoidance of speed and technical challenge in favor of decorous restraint was a mistake. It’s one thing to be low-key and dreamy when the audience is on the move and the setting is intimate. If you make everyone sit down to watch, you need to really dance and find the explosive moment. Didn’t happen; Loewen insisted on restraining every impulse, on pulling every punch.

After that, she split the audience into four groups, which rotated to four performance stations, the Jablonski and Rodero bits included. The two other clever bits: Dan Schuchart turning the job of dusting a vault into a climbing demonstration, and one with a half-dozen dancers at play in the snow, observed through the east windows.

In a nice reversal by way of closure, Loewen moved the audience to the mezzanine to observe the final dances from above. Coins jingled as Schuchart strewed coppers all around. Dancers moved languidly through the space, came to supine rest, then wriggled out of their winter coats like butterflies from cocoons. Past Present ended in the land of marble and gold-leaf dreams.

0 thoughts on “Wild Space takes it to the bank”