Milwaukee is in the process of losing a historic landmark, the remaining tannery buildings of the former A.F. Gallun & Sons Company tannery are being demolished on the city’s Lower East Side. The buildings once housed one of the city’s many tanning businesses, but in a few weeks all that will remain is the redeveloped office building on the south side of North Water Street (Gallun Tannery Row condominiums). The last of the large Milwaukee River tanneries will soon be gone, like Trostel and Pfister and Vogel before it. 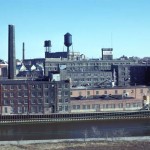 The complex, which has sat empty since 1993, at one time included a number more buildings surrounding the few structures that remain. Those structures were demolished in 2005 to clear part of the site for a potential redevelopment that never materialized.

The buildings that remained, and are now being demolished, were in various states of repair before a wrecking ball started swinging at them. The northeastern most building on the site had a wall partially fall off in October, but according to a comment by Michael Horne the wall was not structural support wall, but a remnant of a previously demolished building. Various informal comments about the two southern buildings on the site put their condition between empty shells in need of a lot of work and rapidly deteriorating. The buildings were not going to be easy to redevelop, and that’s before considering the challenges with the site and any need for environmental remediation caused by years of tanning.

The need for environmental remediation was certainly a looming challenge to redeveloping the buildings on the site, something building owners in the recently controversial East Side Historic Commercial District do not have to contend with. The need for demolition of the Trostel and Pfister and Vogel tanneries was a clear sign that environmental work on the site alone was going to cost well into the millions.

At the end of the day, the deck was stacked against the remaining buildings. The fact that a deal didn’t get done in the condo-crazed early to mid 2000’s likely sealed their date with the wrecking ball. The economics of pulling off such a large deal in Milwaukee’s real estate market were daunting, even in a strong economy (for evidence of how hard things can get in a down economy look at Mandel’s struggle to get financing for the next buildings at The North End). I didn’t expect demolition to come so soon, but when the wall collapsed on one of the buildings something needed to be done.

The demolition of the Gallun tannery doesn’t have to be all doom and gloom though. The site itself presents a number of opportunities going forward. Although it’s unfortunate to lose the historic tanning complex, the site will now become a blank slate for urban development.

With the buildings out of the way, potential developers of the challenging site now have one less obstacle in making a project work on the site. At the same time, one less carrot is in front of them, as historic preservation tax credits are off of the table.

With any luck, hopefully in the next ten years a multi-building project will break ground for the site. That new project will hopefully fuse together the Beerline B neighborhood with the Lower East Side by generating more activity on the under-utilized Marsupial Bridge that hangs below the Holton Viaduct. Any new project on that site will hopefully take full advantage of its location along the river and extend the Milwaukee RiverWalk. 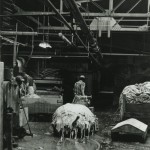 Given the size of the site versus the size of Milwaukee’s real estate market (and the potential need for environmental remediation on the site as well as the likely need for a road to access the entire site), expect any sizable proposal that comes forward to include a request for public financing.

It’s always a shame to lose part of the historic fabric that makes Milwaukee unique. We as a community should do everything we can preserve the historic built environment where it’s viable. Recent events like the Gallun demolition and Marriott Hotel proposal have hopefully demonstrated that better historic preservation policies are needed (more incentives to keep the buildings in good shape before they get to the point of no return, perhaps).

When it comes to redeveloping former industrial buildings, a number of things must be right to make their preservation economically viable. In the Gallun’s case the odd site configuration, likely need for environmental remediation, and site location weren’t helping make preservation any more likely. Going forward, it’s more likely a proposal will come forward for the site given the removal of the buildings, which presented another challenge for an already difficult site. 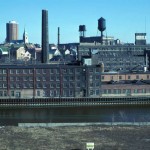 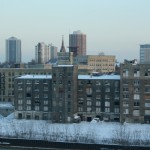 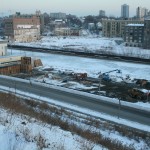 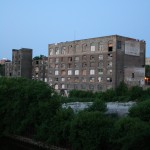 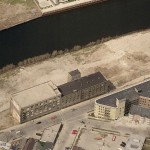 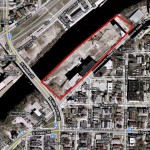 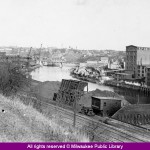 The Gallun Tannery Complex and the Milwaukee River