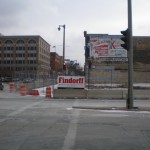 Numerous signs point to a national economy that is recovering.  Hiring has started to pick up, banks are starting to lend again, and locally ‘failed’ projects are slowly filling up.  But everything isn’t great just yet, as here in Wisconsin there is a 14 month supply of homes available on the market, and nationally unemployment sits at 9.4%.  With these factors in place, what can we look forward to for Milwaukee in 2011?

A couple of what many consider ‘failed’ projects are poised to make successful turnarounds this year.  Despite legal battles and bankruptcy Park Lafayette could fill with renters in 2011, as it is currently more than half full.  And with only about 30 units left at The Point on the River has a chance of moving from the failure column into a resounding win for downtown Milwaukee.  Due to the continuing legal battle involving the near complete Residences on Water, it isn’t likely this will be completed in 2011, but if it does it will change from being the most visible sign of the economic downturn in Milwaukee, to a sign of Milwaukee’s future growth.

On the development side, a handful of projects in the downtown and near downtown area will be underway this year.  First and foremost we will see the long awaited construction of The Moderne begin to rise up on the edge of the Park East.  The Jackson Square Apartments project in the Third Ward, which seemingly has been under construction for years, should open in 2011, and if it follows the path of Corcoran Lofts it has a strong possibility of renting up.  Two quick moving projects that we’ll be following in 2011, the Beerline B Apartments and National Lofts obtained WHEDA tax credits and began work in late 2010.  Mercy Housing Lakefront’s East Side apartment proposal will go before the Zoning, Neighborhoods & Development Committee this week, and because of the numerous design changes that the project team made to accommodate the neighborhood it is likely this project break ground in 2011.  The controversial Marriott Hotel project will probably get denied at today’s Historic Preservation Commission meeting as it is unclear if the project meets the legal requirements for a Certificate of Appropriateness, but it appears the Common Council is poised to over rule the commission, so it is possible demolition could start this year.  In addition to the Marriott Hotel, two other hotel projects are ready to move forward.  At The Brewery, Gorman & Company is redeveloping a building into a boutique hotel, and the Loyalty building in downtown Milwaukee is to be converted into a hotel as well.  Development may not be as strong as during the boom, but is clearly poised to pick up in 2011.

In regards to transit we know the high-speed rail project is done in Wisconsin, but the repercussions of the election impact transit far beyond just that one project.  Now that the Governor’s race is over an opportunity exists for Mayor Tom Barrett to get back to focusing on Milwaukee, and in turn move the streetcar project forward, assuming Milwaukee is able to maintain local control over the project.  And with new leadership at Milwaukee County, it is possible more of a priority could be placed on transit service, and Milwaukee County could actually move forward on the proposed express bus (it to-date isn’t true BRT) service, but that depends on who becomes the next County Executive.  Unfortunately, it is very likely that Milwaukee County and the City of Milwaukee will face a cut in shared revenue, which could lead to many services being cut and in regards to transit, force the further decline of the Milwaukee County Transit system.  The picture for transit improvements in 2011 is as murky as it has ever been.

In summary, development, primarily of apartments and hotels, will continue to pick up in 2011, but the direction transit will go is unclear and troubling.