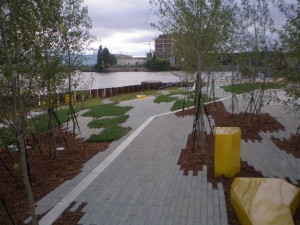 Much like the recently opened Zilber Park, the new Erie Street Plaza differs from a typical park in Milwaukee, as it isn’t a lot of grass and trees, but it is certainly a unique space.  The design as implemented has changed significantly from originally planned, it was to have bamboo, but was built with quaking aspen trees due to budgetary concerns, neighborhood opposition, and failed test plantings.  Although this change takes away from what was a fanciful design it still looks to at least offer a comfortable space along the river.  At points the grass cuts into the boardwalk creating a blended edge between the walkway and plantings, and throughout the park lighted benches, offer a place to rest.  The original design offered to bring something truly unique to Milwaukee, but this at the very least brings more character to the area than the vacant lot that formerly occupied the site.

To see the park for yourself we’ve provided a photo gallery, but better yet stop at Erie Street Plaza and enjoy this new public space. 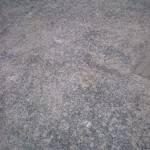 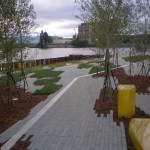 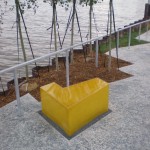 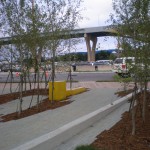 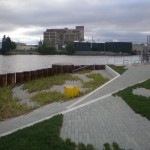 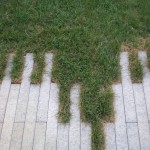 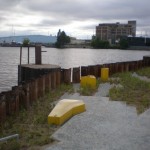 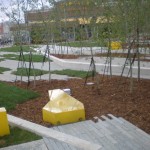