St. Johns on the Lake Under Construction

On October 15th, Saint John’s on the Lake broke ground on “The Expansion,” a new 21-story, $83 million tower along Prospect Avenue.  The tower, a senior apartment complex, will add 88 units to the St. John’s on the Lake complex at a cost of $946,306 each.  The units start at 1,140 square feet, and come with amenities that include an art gallery, bistro, fitness, swimming, and spa pools, and on top of that private terraces are included with every unit.  The building will also include “signature residents” on the top floor.  And the best part, it was planned to all be property tax free! 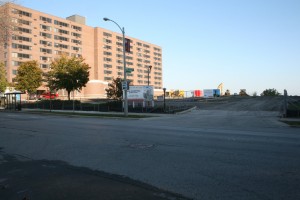 The existing building will be dwarfed in comparision to the 21-story tower that will consume the old surface parking lot.

While normally the construction of an urban high rise wouldn’t draw resentment from this website, a high rise that was built tax-free seemed a bit odd.  After all, should the state of Wisconsin really grant a property tax exemption for luxury senior living? Before the latest state budget was passed, this facility (like almost all other non-profit hospitals, assisted living facilities, nursing homes, hospice facilities, and dorms) would have been entirely free of any property tax.  Michael Horne calculated exactly what that meant to the bottom line of the City, County, State, MPS, MATC, and MMSD, and it was almost $2 million, annually.

Obviously, that money could be used to hire a lot of teachers, police officers, and firefighters.  Not to mention plow snow, pick up garbage, clean parks, and keep libraries open. 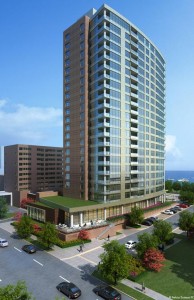 St. John’s on the Lake “The Expansion” as viewed from Prospect Avenue.

Had a future resident of the St. Johns on the Lake independent living facility simply elected to instead purchase a luxury condo at another high rise, say Kilbourn Tower, instead of The Expansion they would have been paid their fair share of property taxes.

That said, there is certainly good reason to grant exemptions to seniors residing in senior-living facilities.  They likely are on a fixed income and are potentially spending a considerable amount of money on medical care. But where should the line be drawn?  Clearly someone capable of paying an entrance fee starting at $270,000 and monthly fees that start at $3,000 is not living on your traditional fixed income.  They do not need a tax break simply to be able to live their life comfortably.

In Milwaukee County, that 130% figure would equal a unit with a value of $240,330.63 (fun fact in Waukesha and Ozaukee County it would be right around $410,458).  With an average unit construction cost of $946,306 (which would include all the common area amenities), it’s pretty clear units will be paying property taxes from the minute they’re occupied.

As far as I can tell, problem solved.

From an urbanist’s perspective, it’s good to see more senior living being located in a walkable neighborhood (and correspondingly so in a pedestrian-friendly facility).  The residents will have access to all that the Lower East Side has to offer within walking distance from their apartment, and will be welcome new customers at any of the businesses.  Children and grand children coming to visit will have an easy time getting to the facility by car or bus (MCTS route #30 runs by the front door of the facility).  It’s also nice to see a large surface parking lot being replaced by a building, this will pay dividends by making the neighborhood as a whole more attractive to pedestrians, visitors, and potential residents alike (much as the unfortunately bankrupt Park Lafayette does just a few blocks away).  With the tax issues resolved, this building gets the seal of approval from this urbanist as it could have just as easily been a sprawling greenfield development in Lake Country.

Future taxpayers of St. Johns on the Lake, welcome to the neighborhood!

8 thoughts on “St. Johns on the Lake Under Construction”