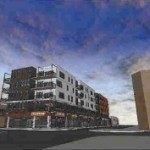 First up was New Land Enterprises’ Kenilworth apartment building proposal.  This proposal had been held at the previous committee meeting to allow for an “informational” meeting with the neighborhood.  As the committee had indicated at the prior meeting they felt that overall this was a positive development for the city.  It was approved and will now go before the full Common Council.

Bob Monnat, the chief operating officer of Mandel Group, pointed out four items of note regarding the proposed UMW dormitory project.  First, he noted that this project has received unanimous support from the East Side BID.  Secondly, he explained that UWM has as of the time of the meeting, committed in writing to expand several safety programs.  Thirdly, he noted that Mandel Group has voluntary offered to met at least an 18 percent EBE requirement and he referred to how bad the economy has been for contractors when he said, “Boy do these guys need it.”  Finally he pointed out that they’ve been working on this plan since June, and having spent a considerable amount of time engaging the neighborhood, wish to move forward so they can begin work in the next ninety days.

Each year 90 percent of incoming freshman at UWM apply for university housing but because of the shortage of beds thousands are turned away each year.  David Gilbert, UWM Foundation President, pointed to national research that indicates, as he said, “student success is directly tied to the ability to live in university housing.”  He went on to explain that because of this potential positive impact on student grades this is one of the driving factors behind the efforts to build new dormitories.

Tom Luljak, Vice Chancellor of University Relations and Communications, stated that “we believe these investments are already making a difference,” and pointed to their research that indicates that there are 300 fewer students living in the neighborhoods since the opening of the RiverView dorm.  He added that  “we, like the neighbors believe that quality of life is absolutely essential,” and went on to explain how the university views the East Side as a recruiting tool.

Alderman Bob Bauman said he would support this project but wondered why the university wouldn’t even consider building a dormitory downtown.  He pointed to a part of downtown Chicago that is home to 50,000 college students explaining that this student population supports retail and improves downtown Chicago’s vibrancy.  He took the opportunity to express his near anger over UWM’s proposed expansion of the Engineering school to Wauwatosa, saying that “I’ve been frankly dying to make these points known.”  He made it clear to UWM that they need to consider downtown for future dormitories and implicitly for the Engineering school when he said that “I will never support another UWM dorm project on the East Side.”

Alderman Nik Kovac reiterated Alderman Bauman’s comments regarding UWM’s expansion plans saying, “build those satellite campuses downtown.”  He then explained the long process that this project has gone through and spelled out the criteria he expected the new dormitory and UWM to respect.

He indicated that UWM and the development team had met these criteria and the project should move forward.

Only Teresa Kinis, the Chair of the Riverside Park Neighborhood Association, appeared in opposition and she reiterated her previously stated reason saying that, “I’m more concerned with the end client.”  Alderman Willie Wade speaking to Teresa and the broader audience, summed up an often forgotten point, when he said that “we never get 100% consensus.” Explaining that sometimes they have to make tough decisions and in this case he was supporting this project.  The resolution was approved and will now go before the full Common Council.