Urban Milwaukee is launching a new series spotlighting new, urban businesses in Milwaukee. We believe urban small businesses, especially those in mixed-use buildings, are what help build the fabric of a great city.

Blatz Market & Liquor Depot, located in the former Blatz brewery on Broadway, isn’t your regular liquor store. Owner Joe Woelfle, a resident of the Blatz Condominiums himself, didn’t set out to create a high-volume store to compete with the nearby Metro Market liquor store. Instead Woelfle worked with his distributor, Beer Capitol Distributing Inc, to create a product assortment that was unique from other stores in the area. The end result is a selection of almost 130 different types of beer, 130 unique wines largely in the $9-$15 a bottle range, and a spirits section that covers your needs. The product mix will allow Blatz Liquor to cover all the needs of Blatz residents, office tenants, and future residents of the Residences on Water, while also offering a unique collection of beers and wines to draw customers in from further away.

While I am far from qualified to discuss the wine selection (which appeared to have a great enough variety to keep you occupied for years trying different brands), the selection of beer was exciting. Blatz Market & Liquor Depot has your standard Miller and Bud brands, but the selection of micro and craft brews puts other liquor stores to shame.

You’re able to find the entire Lakefront Brewery catalog. But if you define local to mean beers from all over Wisconsin, and not just Milwaukee, you’re covered. Beers from Capital Brewery, Rush River Brewing Company, Ale Asylum, and Furthermore Brewery fill an entire rack. Not surprisingly, Blatz Market & Liquor Depot does carry its namesake product, Blatz beer, in both cans and bottles (to which we were surprised to learn still even comes in bottles). Milwaukee’s other famous products, Pabst and Schlitz, are both well stocked as well. The real differentiator between the new store and other neighborhood stores when it comes to beer though is that all beers are sold cold at Blatz Market & Liquor Depot.

The physical location itself delivers a unique shopping experience. Located on Broadway inside of the former Blatz brewery, the walls still show signs of the massive amount of beer production that took place in the building. Instead of hiding the darkened cream city brick behind drywall, as is too often done, Woelfle chose to leave it exposed ensuring customers of an experience not too be found in suburban strip malls. The store is largely free from the images of MillerCoors and Anheuscher-Busch products that plague the shopping experience at other stores. This leaves customers free to concentrate on the product they want, instead of the product they’re being sold. Shopping at Blatz Market & Liquor Depot is a pleasure.

Owner Joe Woelfle is not a first time entrepreneur. Last October he purchased Chicago Avenue Liquor in South Milwaukee, a store he describes as “the neighborhood liquor store.” The product mix there he describes to be quite different from his new location in the Blatz building, with the majority of sales coming from household names such as Miller and Fleischmann’s.

Woelfle’s experience might have helped sway residents of the Blatz to support his opening a liquor store. He said there were only a few residents concerned with his store’s opening.

One challenge that has presented itself in the development of a retail establishment in a converted brewery is street-side signage. Woelfle agreed not to place the word “liquor” in bold lettering right outside his door on Broadway, something that would be sure to anger condo owners. He’s currently considering his options, but sounded likely to settle on a sign that resembled the classy Blatz signs affixed on the corners of the building.

Blatz Market & Liquor Depot will be an asset to the neighborhood. Joe Woelfle appears to have wisely chosen his product selection to avoid the pitfalls of nearby stores that have failed (the wine only, on the corner of Van Buren and Ogden). The store is stocked with mass-marketed products that appeal to the masses, and a healthy variety of hard-to-find beers and wines that are sure to draw in customers that live far closer to other liquor stores. The attention to quality should make the store a long-term asset to Blatz Condominiums residents.

You can follow the comings and goings of Blatz Market & Liquor Depot on the Blatz Cave blog. Stay tuned to the blog as monthly wine tastings are planned to run on Thursday’s to accommodate the Jazz in the Park crowd. 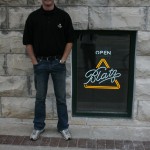 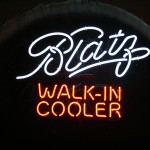 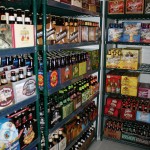 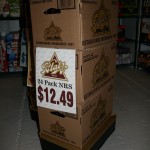 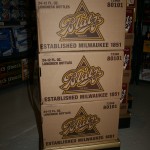 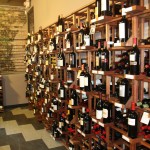