27-Story Tower on Prospect Faces Opposition – But Why? 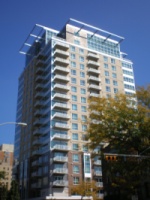 New Land Enterprises’ development of the Goll Mansion property, located at 1550 N. Prospect Avenue, has been in the works since 2005 when New Land Enterprises purchased the property. The current plan is to build a 27-story 35-unit condominium building that would utilize the historic Goll Mansion as the lobby of the condominium building. This plan would add $60 million to the City of Milwaukee’s tax base, enhance the skyline, bring new residents to the city and save the Goll Mansion.On July 17th a community meeting was held to give the public an opportunity to hear about the proposal and ask questions. Architect Scott Kindness started with an informative overview of the proposed project and went a step further by attempting to explain the zoning issue. He displayed renderings of a shorter although wider building that could be built within zoning and a preferred option that was taller and narrower that would require the zoning change. He went on to explain that the the preferred design wouldn’t take up any more volume than the current zoning allows but with the change in zoning it would allow them to create a taller thinner structure.Local historian Russell Zimmerman spoke at length about the history and the specific plans to restore the Goll Mansion. He addressed citizen concerns over building the new structure behind the historic Goll Mansion by pointing out that building a new structure in conjunction with restoration is actually a preferred preservation technique utilized in numerous cites. He compared this project to the preservation of the Villard Houses in New York City which blended the historic structure with a new high-rise now known as The New York Plaza Hotel. Because this project will involve historic preservation work both the Milwaukee Preservation Alliance (“MPA”) and the National Trust for Historic Preservation were collaborated with during the design process. Further it was explained that before this project breaks ground there will be a memorandum of agreement in place to insure the preservation work happens as promised. Alderman Bob Bauman indicated that the City of Milwaukee will do whatever is legally possible to insure this and that as the intentions are to utilize the Goll Mansion as the condominium’s front door and lobby it seems likely these efforts will be completed with the condominium project.

Beyond the historic preservation concerns the audience brought up various additional complaints. Some audience members raised concerns that this $60 million development would hurt their property values, that there’s already not enough parking, and that the proposed development is too close to the bluff. Alderman Nik Kovac got in to the act by responding to some remarks when he stated that “the developer’s track record is relevant” in a clear reference to the New Land Enterprises’ Downer Avenue project. But underling all of these issues was just one issue. Lake views. The core opposition was mainly composed of residents from 1522 On The Lake and despite other concerns their primary interest came through loud and clear. That they didn’t want their lake view obstructed in any way. One resident went so far to propose an additional option, that the property not be developed at all. This drew applause as no change at all is safe and of course wouldn’t impact their view. But what seemed lost on the discussion was that New Land Enterprises’ could construct a building under current zoning that would actually block more of the view than what they are proposing.

There will definitely be more press and heated debated over this proposal in the coming months but the choice is clear. Help preserve a historic structure and add $60 million to Milwaukee’s tax base or preserve lake views for the residents of 1522 On The Lake?

27 thoughts on “27-Story Tower on Prospect Faces Opposition – But Why?”