The District Attorney’s office has negotiated no contest pleas with James F. Kennedy to counts that allege he possessed forged artwork. Charges of Attempted Theft by Fraud will be dismissed, and the remaining Forgery counts against Kennedy will be considered as read-in offenses.

“The State of Wisconsin will be recommending a substantial fine at sentencing,” according to Assistant District Attorney Kurt Benkley who was prosecuting the case.

Kennedy was first brought to your attention at milwaukeeworld when we reported that he had consigned some spurious Picassos for sale at the DeLind Gallery of Fine Art.

Bill DeLind promptly notified authorities about the “Picassos” and Kennedy was arrested shortly thereafter. Items were seized from the dealer and from Kennedy’s van, which was full of forged artworks.

The artwork seized from Kennedy remains in the possession of the Milwaukee Police Department.

According to a letter from Benkley to a potential witness in the case, “The above settlement was reached after Judge Timothy Dugan ordered all of the evidence recovered from defendant Kennedy’s automobile to be suppressed as the fruit of an unlawful search. The judge ruled that the prosecution may not introduce this evidence at trial.

“The loss of this evidence greatly weakened the prosecution case, and lead (sic) to the above compromise plea negotiation.”

Kennedy will enter his no contest pleas on January 7th at 1:30 p.m. in Room 113 of the Milwaukee County Safety Building, 821 W. State Street. Sentencing will immediately follow.

Please be wary of any artwork that may be offered to you from an unknown dealer. Any reputable art dealer will always permit serious prospective purchasers to make extensive independent inquiries as to the authenticity and value of any artwork offered for sale.

Plus, who needs a fake Picasso, anyway, when there are many quality artworks by friends and neighbors available for sale during Gallery Night, which is coming up again on Friday, January 21st?

Interestingly, for the first time the Michael H. Lord gallery does not appear among participants of Gallery Night. During the October Gallery Night, Lord’s gallery flew the banner of the Milwaukee Art Dealers’ Association although he had previously been expelled from that organization.

Last month the Marlborough Gallery of New York City added itself to the list of those who hope to collect judgments against the dealer.

The Mayor’s Design Award was a program instituted by Mayor John Norquist to celebrate good design in the community.

The awards under Mayor Tom Barrett have been renamed the Mayor’s Urban Design Awards, which may be a difference without a distinction, but you’ve got to allow the guy to put his own stamp on things.

The awards will be granted Friday, January 7th at 6 p.m. at the University of Wisconsin – Milwaukee School of Architecture and Urban Planning Commons Area, 2131 East Hartford Avenue.

According to Andrea Rowe, the Communications & Media Manager of the Department of City Development, “the annual awards recognize those businesses and designers who have gone beyond the mediocre to create public spaces or street-friendly places that are warm, welcoming, innovative, creative, urban, sophisticated and fun.”

African World Festival brought in revenue in 2003 in the amount of $442,086 yet spent $554,409 during that period, the most recent for which information is available about the annual event held at the Henry W. Maier Festival Park.

We will leave it to the experts to tell us if the African World Festival shows the financial robustness it needs to succeed as a “three day festival to recognize the heritage of African Americans,” but things don’t look too jolly from a layman’s perspective. For instance, the group claims a total accounts receivable amount of $7,775, which is something, but we also note that the allowance for doubtful accounts is also $7,775, which means that money might be hard to collect.

If you would like to examine the books of the festival, they are in the care of OIC-GM at 2835 N. 32nd St., and they would certainly rush to open them for you.

The organization’s form 990 was signed by William A. Clay. Clay has since been terminated by the beleaguered social service agency.

The document itself was prepared by Coleman & Williams, LTD of 316 N. Milwaukee St.

That is the same firm that did the accounting work for OIC’s own crooked books, and you will remember that the Coleman & Williams firm was one of the conduits between OIC-GM money and Gary George, as we have reported here earlier.

On the plus side, the festival had no paid employees, officers, directors or trustees. The firm’s single greatest expense was $155,725 paid to Chicago Center Stage Promotions, of 8759 S. Constance Avenue, in Chicago.

Among other expenses, we learn that African World Festival paid $70,850 in rent to Milwaukee World Festivals, Inc. for the use of the Summerfest grounds. 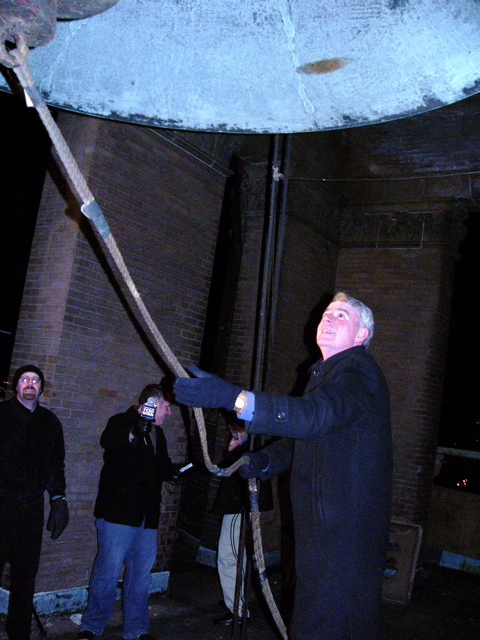 New Year With he Mayor

On January 1, 2000, Mayor John O. Norquist led a party at the top of City Hall at which time he rang the Solomon Juneau, the building’s giant bell that had been largely silent for 80 years.

Norquist kept up this tradition for the remainder of his career, but last year then-acting Mayor Marvin Pratt couldn’t be bothered to take advantage of the opportunity to ring the bell, and there was question as to whether the event might simply die.

Fortunately, Mayor Barrett recognizes the value of standing atop the Great Hall of the People during a blustery eve, and he was joined there by about 30 people for the ringing (if not swinging) event.

Meanwhile, as the final minutes of 2004 dissolved, and as Water Street became rather liquid (if not lubricated) County Executive Scott Walker was with his family on the rink at Red Arrow Park, which was quite jammed with skaters and other coordinated types.

Walker was happy that a new microphone hookup was in place that would allow him to talk (and talk) through a loudspeaker system while the Mayor chimed in from on high.

At the stroke of midnight, the mayor pulled on the rope that moved the clapper on the Solomon Juneau – a prodigious task – and the bell began to chime.

After a few rings, the mayor got into the task before handing the rope to others assembled there, including some of his children and the family of Chief of Staff Pat Curley.

Milwaukeeworld was there capturing the excitement on Joe Klein’s wonderful digital camera, and we are happy to share some of the images with you.

Back in the 1880’s, when the word was first coined, “epicenter” was a geologic term indicating “the point of the earth’s surface directly above the focus of an earthquake.”

This makes sense, since “epi” means above.

In fact, about the only use of “epicenter” that I can tolerate is in exactly this sense.

However, since “epicenter” sounds like “a super, really important, heavy-duty center,” there now is an acceptable second use of the term as “focal point,” as in “Brady Street is the epicenter of Milwaukee’s Futon culture.”

The usage panel of the American Heritage Dictionary of the English Language: Fourth Edition, 2000 “approves of figurative extensions of its use in dangerous, destructive or negative contexts.”

I say to heck with it. “Epicenter” is a cliché, and will only be used in this website to describe the point of the earth’s surface directly above the focus of an earthquake, and request you do the same.