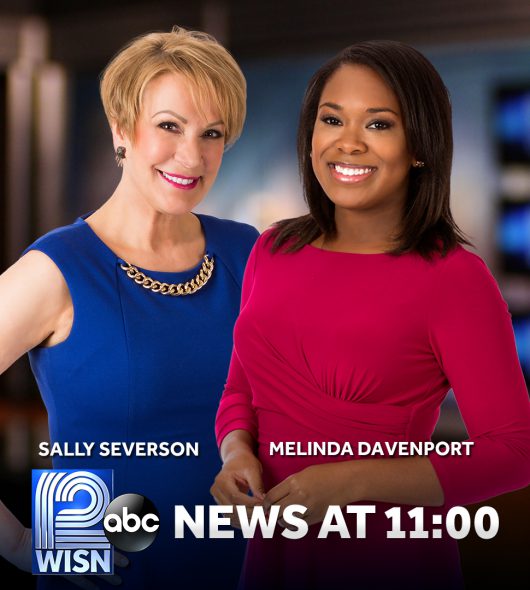 “We’re very excited to expand our news into a new daypart, and provide our viewers with more opportunities to receive WISN 12’s important local news coverage.” says Jan Wade, WISN 12 president and general manager.  “At the same time, ABC is launching ‘GMA Day’ with Michael Strahan and Sara Haines, which will work perfectly with our new 11 a.m. newscast. We are thrilled to have the strength of Melinda and Sally to launch our brand-new daytime hour.”

Melinda Davenport joined WISN 12 from Hearst sister station WMUR in March of 2014. Davenport’s first role at the station was as the breaking news anchor for “WISN 12 News This Morning.” From there, Davenport moved to co-anchor of the weekday morning show, and has earned several honors along the way, including “Best Personality” by the Wisconsin Broadcasters Association.

WISN 12, the ABC station in Milwaukee, is owned by Hearst Television, which owns and operates television and radio stations serving 26 media markets across 39 states reaching over 21 million U.S. television households. Through its partnership with nearly all of the major networks, Hearst Television distributes national content over nearly 70 video channels including programming from ABC, NBC, CBS, CW, MY Net, MeTV, This TV, Estrella and more.  The radio stations are leaders in Baltimore news/talk and rock music listenership.  Hearst Television is recognized as one of the industry’s premier companies, and has been honored with numerous awards for distinguished journalism, industry innovation, and community service.  Hearst Television is a wholly owned subsidiary of Hearst.  The Company’s Web address is www.hearsttelevision.com.