He was promoted to Lieutenant Colonel in 2015 and to Colonel in September 2016. 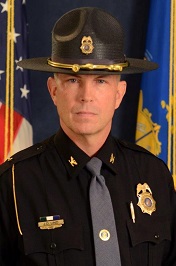 JD Lind. Photo from the State of Wisconsin
Department of Transportation.

A native of Bayfield, Wisconsin, Lind began his career with State Patrol as a member of the 44th Recruit Class in 1994. Since that time, he has served in a variety of roles in the Northwest, North Central and Southwest Region State Patrol posts, as well as with the State Patrol’s Bureau of Specialized Services.

He was promoted to Lieutenant Colonel in 2015 and to Colonel in September 2016. Prior to entering law enforcement, Colonel Lind was a high school teacher. He holds a B.S. Degree from UW-Stout.