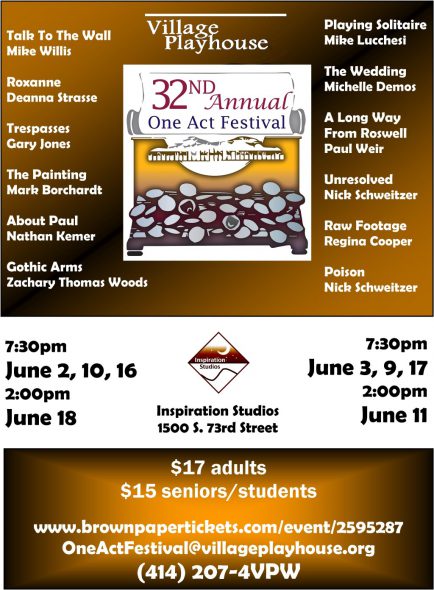 “This year’s festival is all about perceptions, receptions, and misconceptions,” says Tom Zuehlke, Producer of the Village Playhouse 32nd Annual One Act Play Festival.  “We were pleasantly surprised at the quality of the thirty two scripts—yes, thirty two!—that were submitted this year for consideration.  So much so, that the selection committee couldn’t narrow the selections down to just 6 or 7 scripts, but decided to produce twelve one acts this year. It has been a huge undertaking, but the results have been fantastic!”

Zuehlke explains, “Six plays (group A) will be performed on Friday, June 2.  Six completely different plays (group B) will be performed on Saturday night, June 3. The following weekend, they switch nights with group B performing on Friday, June 9…and so on. It’s been a challenge and a risk.  But it’s also been exciting to give so many actors and directors the opportunity to bring to life the characters of eleven playwrights from all over Wisconsin.”

Each year, Wisconsin playwrights submit original, never-before-produced, one act scripts for consideration. This year’s line up includes scripts from several newcomers to the Village Playhouse as well as repeat contributers.

Opening the festival and playing on even dates (June 2, 10, 16, and June 18 matinee) are Group A plays written by the following playwrights:

In The Painting, by radio producer/screenwriter Mark Borchardt, a couple haggle with an artist, played by Mukwonago native Bonnie Rohn, over a very expensive, unwanted painting that they would like to “trade in” for something different.

Nathan Kerner is a Marine veteran who discovered theatre later in life. His first entry into the Village Playhouse one-acts, About Paul, offers an unorthodox encounter between two women who were both involved with the now-deceased husband and lover.

Mike Willis is no stranger to the Village Playhouse, having had several of his plays produced in prior festivals. In Talk to the Wall, a rather eccentric disabled veteran (Erico Ortiz) who visits the Vietnam Memorial in DC on a daily basis, helps a visitor named Dorothy (Bonnie Kotlewski Sekulovich) communicate with her deceased father by… um… talking to the The Wall.  “Welcome to Oz, Dorothy!”

Platteville writer and teacher, Gary Jones, provides insights into the minds of a hiker and a hunter during a chance encounter in the woods in Trespasses.

Gothic Arms by Zachary Thomas Woods, newcomer to the Village Playhouse one acts, takes a second look at super heroes and villains…from the point of view of their assisted living quarters, now that capes and escapades have long been retired.

Roxanne by local actor, director, playwright Deanna Strasse, provides much room for laughter as a ventriloquist, played by Sam Billeck, suffers at the hand of her domineering puppet.

Audience members get to enjoy original plays and participate in the fun by voting each night for their favorites: actor, director, ensemble, script, and even a few write-in categories decided by the individual audience member.  The results are tallied and awards presented to the audience favorites at the yearly Encore Awards Ceremony in July.

Featured on odd-numbered dates (June 3, 9, 11 matinee, and June 17) are Group B plays by the following playwrights.

Michael Lucchesi’s Playing Solitaire pulls at the heart strings while an elderly man (Bill Murphy) fights to maintain control over his surroundings as his mind begins to slip away.

The Wedding is Michelle Demos’ second one act play with the Village Playhouse. Directed by Laura LaPinske, an irritable couple ponders why they were given such bad seats at a wedding reception in this contemporary comedy, but clearly forgot to read the invitation details to ensure they attend the right wedding.

Nick Schweitzer returns to Village Playhouse with two increditlbe scripts. Unresolved explores the misconceptions of a lost love—forty years after WWII.  Was it true love that Stanley (Scott Sorensen) felt so long ago? Or was it something entirely abhorrent and vile, according to Francesca (Catherine Gill)?

Schweitzer’s Poison features newcomer Gabriela Dorantes as trophy wife Anne Wade, seeking to rid herself of her elderly husband, played by Mark L. Gormican, in this comical twist of fate.

Veteran actor, Paul Weir, has acted on the Village Playhouse stage for many years. A Long Way From Roswell is his first contribution as a playwright.  Set in outer space, this seemingly light-hearted sci-fi trek experiences a reversal of fortune.

“The perceptions and misconceptions, the reality and the fantasy… all will collide during this year’s festival,” proclaims Zuehlke.  “It should be fun to watch the many characters come to life on stage where all is revealed.”