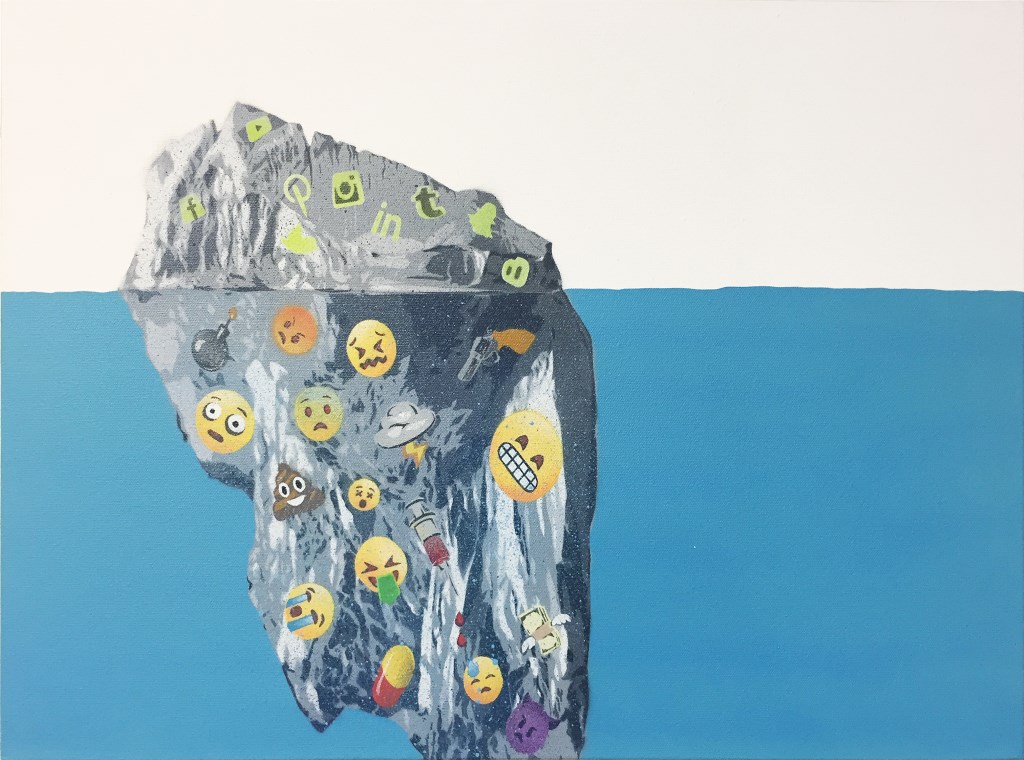 Below the Surface by Fred Kaems.

True Lies is the sixth installment in the provocative CultureJam MKE series. There is an ongoing battle being waged against logic, science, free speech, and equality. In a world of “fake news” and disinformation it is vital that people look critically at the issues. The fate of the planet and the humanity is at stake.

Highlights are sure to include:
“Fool Me Once – Fool Me Twice – Self Imposed Fairness Doctrines”, by Dara Larson. The work includes variations on personal and public statements, alternative facts, inventive hyperbole, and truth or lies referenced on major media outlets over the weeks of September/October 2017. Viewers can discern truth or lies based upon their subjective lenses. As that is how we currently discern objective fact in political spheres. What remains to be seen is the ability of individuals to apply a personal fairness doctrine since the doctrine was eliminated in 1987.

“Sisters: Like the Others They Helped” is by Kari Garon. As a child, Kari was raised from infancy with a family, and a broader community, who did not visually reflect my own likeness. She began an emotionally survivalist process of piecing together bits of experiences and imagined realities, to replicate an identity that mirrored those around her. Sisters: Like the Others They Helped (2017) depicts the colonized fallacy that belongingness is somehow connected to assimilation. Although many members of society ideally support the idea of “diversity” or “cultural celebration”, this broader sense of social compliance, whether spoken or unspoken, dictates how identity is facilitated, working to reinforce the social capital and the maintenance of power for certain populations over others.

Artist Fred Kaems has created a piece titled “Below the Surface.” Nothing is ever what it seems, especially in the cyber world of today. Social media is full of carefully curated information from, that photo at just the right angle with the perfect filter, to that carefully crafted 140 character rant. The brief nature of the way information if shared using technology, makes it difficult for any of us to truly understand what is going on in these images and texts. Or maybe more importantly to understand all of the things that we don’t get to see, unless of course we were actually there. In every instance of life, there is a series of decisions we each make, the back story, the struggle before hand, the failures, the successes, the basic human experience. This painting uses the very characters of this rapid communication, to remind the viewer that there is always more Below the Surface.

CultureJam MKE is a no-holds-barred indie art series showcases outstanding regional artists challenging dominant notions of the relationship between human beings and their physical and mental environments. In this round CultureJam MKE founder and curator Jeff Redmon brings together nearly 30 artists to expose truth, providing a thought provoking experience for viewers.

“Artists must be at the frontline of progressive change.” – Waldek Dynerman

Come out to connect, comment, discuss and enjoy this no-holds-barred exploration of truth by Milwaukee artists. Experience the power of art and roll it plays in our ever-changing culture. For the complete artist listing and more information please visit http://culturejam.me