APRIL 2, 2018 – Wisconsin governor candidate Mike McCabe today proposed transformative tax changes to turn Wisconsin’s tax system from one that allows the wealthiest in the state to pay the lowest overall tax rate into one where everyone pays their fair share.

“If you need to fix your car or truck, you pay sales tax on top of what it costs you. But if you own a private jet and need repairs or spare parts, you are exempt from the tax,” McCabe said.

“If you buy your kid a winter coat, you pay state sales tax. But if you pay a public relations firm to spruce up your image, there’s no tax,” he said.

Another key feature of McCabe’s tax reform plan is ending what is known as the MAC tax break that benefits a mere one-third of 1% of taxpayers in the state. More than three-quarters of the beneficiaries make more than $1 million a year, and well over 90% of those taking advantage of MAC have incomes exceeding $300,000 annually.

“MAC is a tax loophole big enough to drive a Mack truck through, and it’s the super-rich who are doing the driving,” McCabe said, adding that it resulted in tax breaks averaging more than $2 million for 11 tax filers earning $30 million or more in 2017. Closing the loophole would bring in more than $320 million a year in taxes that some of Wisconsin’s wealthiest people currently are escaping.

“We don’t need any new taxes. But we do need to make sure everyone pays the ones we already have,” he said.

McCabe’s proposed changes to the state sales tax include lowering it from 5% to 4.5% – a 10% reduction in the rate – and applying the tax to purchases that currently are exempt including:

McCabe already has called for funding nearly $700 million in new investments in the next two-year state budget by ending two unsuccessful subsidy programs and using the savings to make education and job training more affordable and bring high-speed Internet to parts of the state currently lacking access. He also plans to put in place two other measures to empower working people that involve no additional state spending. These include boosting wages by turning the state’s minimum wage into a living wage and expanding access to health care by changing a single word in state law to make nearly every state resident able to access affordable, high-quality health insurance through the BadgerCare program.

All of these steps to empower people are needed if Wisconsin is to have a prosperous middle class, McCabe said, noting that so far in the 21st Century no state has seen more shrinkage of the middle class than Wisconsin. The state also can tap upwards of $200 million a year in new revenue to invest in health and education by legalizing marijuana and taxing legal sales in licensed dispensaries, as McCabe has proposed. The more than $320 million gained each year by closing the MAC loophole for the rich also can be plowed into needed investments in infrastructure, education and health.

These investments, together with a lower state sales tax on the kinds of purchases low- and middle-income consumers make most, will solidify Wisconsin’s middle class, McCabe said. 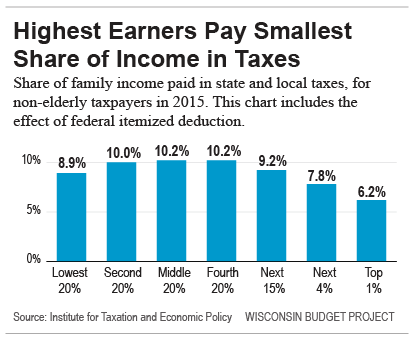 One thought on “Transforming state taxes a key to empowering people, strengthening communities and keeping a middle class”