The World Famous Glenn Miller Orchestra® Swings into Milwaukee on Friday, May 24 to the Wilson Theater at Vogel Hall!

Tickets On Sale on Friday, March 1! 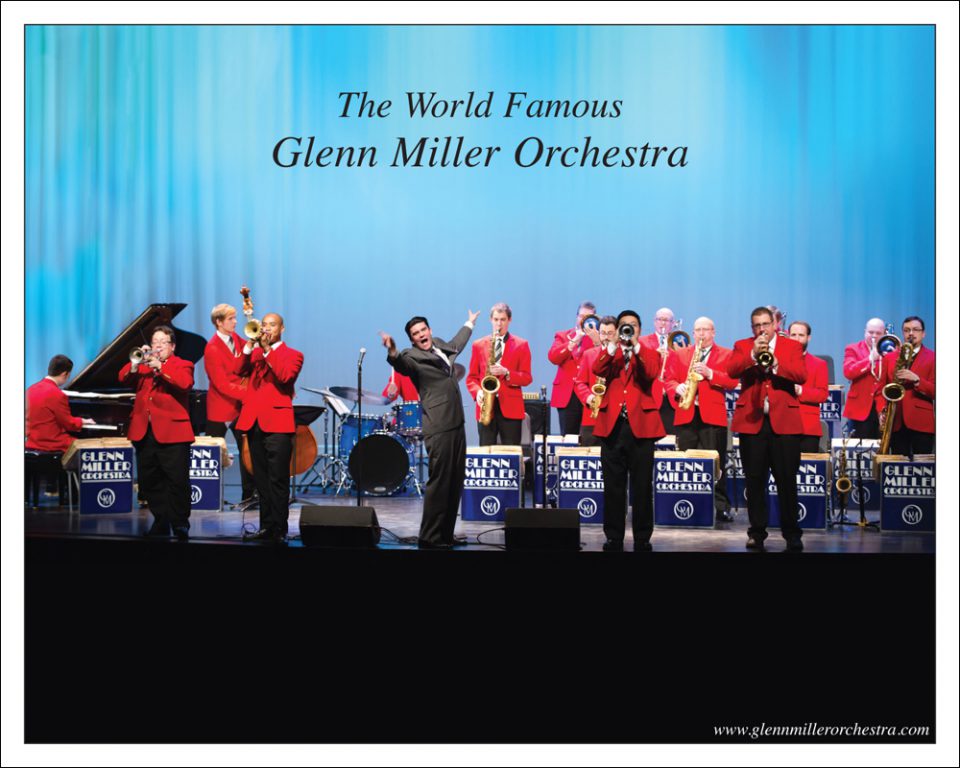 Marcus Center for the Performing Arts

MILWAUKEE, WI (Tuesday, February 26, 2019)-The first Glenn Miller Orchestra did not make it at all. It was a total and absolute economic failure. But Glenn knew what he wanted, held to that dedication and relentlessly worked to succeed. He launched his second band-the one that lives on today-in March of 1938. The Glenn Miller Orchestra has been a “hit” ever since.

The legendary Glenn Miller was one of the most successful of all dance bandleaders back in the Swing Era of the 1930’s and 40’s. A matchless string of hit records, the constant impact of radio broadcasts and the drawing power at theatres, hotels and dance pavilion, built and sustained the momentum of popularity.

Glenn disbanded his musical organization in 1942 at the height of its popularity to volunteer for the Army. There, he organized and lead the famous Glenn Miller Army Air Force Band. It went to Europe to entertain servicemen performing numerous live and radio shows. On December 15, 1944, Major Miller took off in a single engine plane from Europe to precede his band to France, disappearing over the English Channel, never to be seen again. The army declared him officially dead a year later.

With of the release of the major motion movie The Glenn Miller Story featuring Jimmy Stewart and June Allyson in 1954, interest and popular demand let the Miller Estate to authorize the formation of the present Glenn Miller Orchestra. On June 6, 1956, and under the direction of drummer Ray McKinley who had become the unofficial leader of the Army Air Force Band after Glenn’s disappearance, the reformed Glenn Miller Orchestra performed its first concert and had been on the road ever since. Other leaders followed Ray including clarinetists Buddy DeFranco and Peanuts Hucko, trombonists Buddy Morrow, Jimmy Henderson, Larry O’Brien and Gary Tole, and tenor saxophonist Dick Gerhart. Since January 2012, vocalist Nick Hilscher leads the band.

Today, the 18 member ensemble continues to play many of the original Miller arrangements both from the civilian band and the AAFB libraries. Additionally, it also plays some more modern selections arranged and performed in the Miller style and sound.

Just as it was in Glenn’s day, the Glenn Miller Orchestra today is still the most sought after big band in the world. More information on the orchestra can be found at: GlennMillerOrchestra.com.

The band is making a stop in Milwaukee at the Wilson Theater at Vogel on Friday, May 24 at 7:30 pm. Tickets go on sale this Friday, March 1 at 12:00 pm and can be purchased in person at the Marcus Center Box Office at 929 North Water Street, Downtown Milwaukee, by phone at 414-273-7206, or online at Ticketmaster.com or MarcusCenter.org. Groups of 10 or more SAVE! and should call Group Sales at 414-273-7121 x210 or x213. This performance is being presented as part of the Marcus Center Presents series and is sponsored by the Fitz at the Ambassador Hotel.

About Marcus Center. Established in 1969, the Marcus Center for the Performing Arts is the premier performing arts venue in Southeastern Wisconsin.  As the Marcus Center completes its 49th year, it continues to build bridges between diverse members of our community through high-quality arts entertainment in the region and the state.  The touring Broadway series is recognized as bringing the best of Broadway entertainment to Milwaukee for the past 23 years and provides opportunities to educate, entertain and engage audiences. The Marcus Center is also the home to the Milwaukee Symphony, Milwaukee Ballet, Florentine Opera, First Stage plus a variety of other important community and family events throughout the year. For more information about events visit the Marcus Center website at www.MarcusCenter.org.  The Marcus Center is a private non-profit 501(c) 3 corporation and is a dedicated Milwaukee County Veterans Memorial.

Performances Begin on February 5, 2020 And Play for Four Weeks at the Marcus Performing Arts Center through March 1, 2020