And gives away 25,000 Weekday admission tickets with downloads 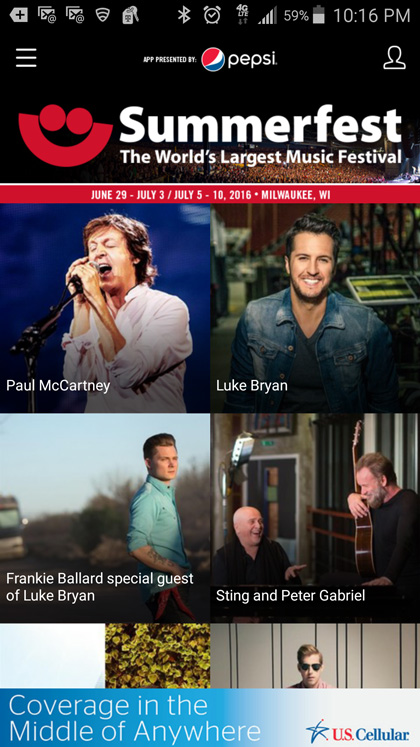 MILWAUKEE (May 6, 2016) – Milwaukee World Festival, Inc. officials are excited to launch the new Summerfest 2016 App presented by Pepsi.  To kick off this year’s launch, 25,000 FREE digital weekday tickets are being offered via the App while supplies last. Simply click on the “Tickets” button in the menu. Tickets are limited to one per device.  The Summerfest 2016 App is available on IOS and Android platforms for mobile phones and tablets. The App is free and available to download today in the App Store or Play Store.

The Summerfest 2016 App presented by Pepsi has been redesigned to help music fans get excited for the “Big Gig®” and plan their visit to the festival.  One of the most exciting new features is the music recommender, which pulls from the user’s Summerfest App or Facebook favorites to create a list of artists that reflect the user’s personal music taste.  There’s no better guide to the lineup, stage schedules and entire Summerfest experience!

Other features will help users:

Users are encouraged to stay tuned as more information about admission promotions, food and beverages, attractions, exhibits and accessibility at Summerfest is added to the App in the coming weeks.

The Summerfest 2016 app was developed by Greencopper who is thrilled to be working hand in hand with Summerfest in order to leverage their years in the industry and elevate the festival experience with the latest in mobile and web innovation.  With this newest collaboration, Summerfest joins Greencopper’s growing roster of over 200 musical clients spanning 25 countries world-wide.

Summerfest 2016 will take place June 29 – July 3 and July 5 – July 10 from noon until midnight and will be closed Monday, July 4.  Following its 1968 debut, Summerfest has evolved into what is now recognized as “The World’s Largest Music Festival” and Milwaukee’s cornerstone summer celebration, bringing the music industry’s hottest stars, emerging talent and local favorites along with approximately 850,000 people from Milwaukee and around the world together each year for an unforgettable live music experience.  During the festival, the spotlight shines on over 800 acts, over 1,000 performances, 11 stages, delectable food and beverages and interactive activities, all in a world-class festival setting.  Patrons can also enjoy Miller Lite, the Official Beer of Summerfest.  For more details, visit Summerfest.com, Facebook.com/summerfest or Twitter: @Summerfest.